Home / Health / Hawaii honors Veteran, 91, for a lifetime of service

Hawaii honors Veteran, 91, for a lifetime of service 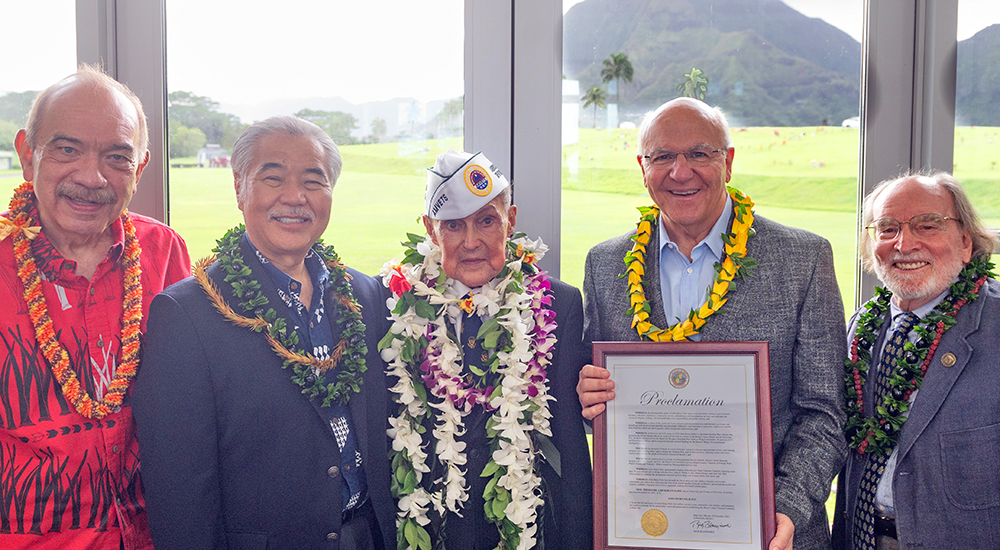 On Dec. 18, 2021, John Henry Felix was honored for a lifetime of service at the Hawaii State Veterans Cemetery in Kaneohe. The visitor center was decorated with memorabilia from his life and it was a beautiful ceremony attended by some of the most influential people in Hawaii.

Scattered showers threatened to engulf the event, but it didn’t stop the sun from breaking through and shining a light onto the land which Felix gifted to the state. Each speaker commented on the irony of being asked to speak for only five minutes about a man like Felix, who has had a long life full of meaningful accomplishments.

The theme – A Lifetime Of Giving – could not have been more apt as each person mentioned when they spoke.

Former Gov. John Waihe’e spoke fondly at the event of the long talks he had with Dr. Felix when he was still in government. Felix initially alerted him to the fact that Punchbowl Veterans Cemetery was nearly full, and who then pushed for a second Veterans’ Cemetery on Oahu.

Donated his land for Veteran cemetery

Waihe’e said the government had looked for land it could afford but came up empty-handed; Felix himself stepped in to provide land for the cemetery.

“I was going to build a house here,” said Felix. “But can you imagine just one house being here? What a waste it would have been.”

Felix was not recognized publicly for his contribution at the time. The State of Hawaii accepted the gift and opened the cemetery with little fanfare. However, when the powerful men of Hawaii look back on who has done the most for the state, Dr. Felix is one of the first names that comes up. That is why this event was organized many years later to thank Dr. Felix and to dedicate a plaque at the cemetery in his honor.

“He gave the Veterans of Hawaii a resting place when they had none,” said Waihe’e. “Thank you, John Henry.”

Felix has a long history of philanthropy – in Hawaii and around the world. He was born in Honolulu, Hawaii, a proud Portuguese son of immigrants from the Azores Islands, and his mother started him on his path to philanthropy by taking him door-to-door as a child to collect for March of Dimes. She was passionate about eliminating polio and Felix would carry on that passion, even meeting Dr. Jonas Salk, developer of the polio vaccine, and becoming involved in The Salk Institute.

Despite Felix’s humble origins shining shoes in Kaka’ako, he went on to many impressive accomplishments. He was drafted in the Army in 1952 and is a decorated Korean War Veteran. When interviewed, he politely glossed over his time in the Korean War, preferring to focus his time as a volunteer aid worker in Vietnam. Later, he continued to serve in the Hawaii National Guard and the USAF Auxiliary.

Felix dedicated much of his life to service, and he remains active to this day as a volunteer, philanthropist and community organizer.

“It’s in my DNA to be of service,” Felix said. “I have always said that. My mother taught me to care for others, and I just kept going.”

Felix attended Oxford University and Harris Manchester in England, and he received two master’s degrees before being awarded a doctorate for his dissertation on Hawaii’s water supply. He is a published author who has written a great deal about Hawaii, and particularly about the Portuguese immigrants from the Azores islands.

Few people have done as much for the state of Hawaii or for the country. One of Felix’s most recent accomplishments is being head of the Hawaii Homeless Veterans Task Force, which works to keep Veterans off the streets in Hawaii.

At 91, Felix is still an optimist. His kidneys failed recently, forcing his son to come from Thailand to care for him. He says he won’t accept a donated kidney because he doesn’t want to take one from a young person on the list who could still live a full life. But he also hasn’t given up. He says that bioartificial kidneys are already being tested and that he’ll get in line when they become available. He hopes he will have many more years of work ahead of him.