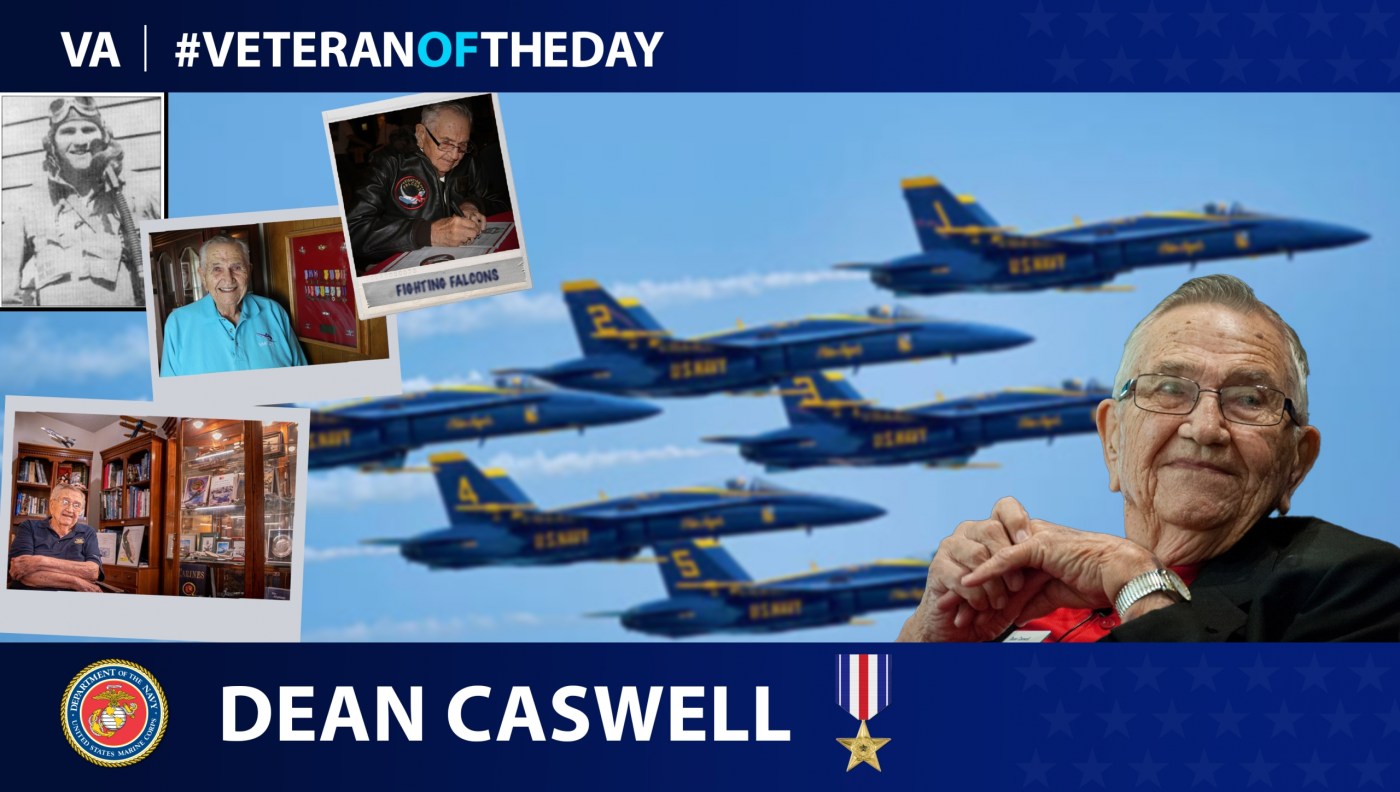 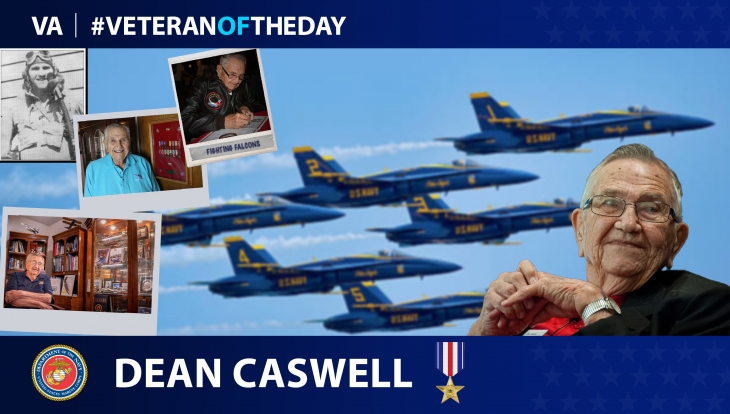 Today’s #VeteranOfTheDay is Marine Corps Veteran Dean Caswell, who served as a pilot during World War II, the Korean War and the Vietnam War.

Dean Caswell was born in Banning, California, in July 1922 and grew up in Blanco, Texas. He attended Edinburg Junior College for two years before moving to Los Angeles, where he studied aircraft maintenance at Curtiss-Wright Technical Institute. One night, Caswell and his cousin went out and partied. The two men drunkenly entered a recruiting office and Caswell joined the Marine Corps. Two weeks later, the Japanese attacked Pearl Harbor.

Caswell’s interest in aircraft led him to aviation school. He spent nine months in flight training in Pensacola, Florida. He learned to land on an aircraft carrier in San Diego, practicing on USS Ranger. Caswell graduated in December 1943 and commissioned as a second lieutenant. He served with Marine Fighting Squadron 221 as a fighter pilot, flying a Vought F4U Corsair. His unit flew from USS Bunker Hill in the Pacific with Task Force 58. Caswell’s first three confirmed scores came on March 18, 1945. He scored another victory on April 12.

On April 28, while trying to stop a kamikaze raid, 30 Japanese aircraft intercepted Caswell and two other Corsairs. In an interview in 2016, Caswell joked, “I was such a brave pilot that I closed my eyes and pulled the trigger.” By the end of the fight, Caswell claimed seven aircraft, with the other pilots claiming a combined nine scores.

Caswell stayed in the Marine Corps and performed as a stunt pilot in two movies: “The Sands of Iwo Jima” and “The Flying Leathernecks.” He served two tours during the Korean War, conducting night missions flying aircraft like the Douglas FD3 Skyknight. In 1953, Caswell joined the Blue Angels. He left the group after getting into an accident with a drunk driver. Caswell underwent 20 operations and had his leg placed in a cast for a year and a half. Nevertheless, he remained in the Marine Corps and served during the Vietnam War. He became commanding officer of Marine Air Control Squadron 6 in January 1964. In December 1964, he took command of Marine Fighter Squadron 333. Caswell retired in December 1968 at the rank of colonel.

During his service, Caswell received several medals, including a Silver Star, two Distinguished Flying Crosses with three gold stars, an Air Medal with four gold stars and a Congressional Gold Medal. Caswell flew over 8,000 hours and served in 110 combat missions. Through this, no bullet holes were ever found on Caswell’s aircraft; he was never hit. During his lifetime, Caswell has piloted 56 different aircraft. Today, Caswell is the last living Marine Corps ace from World War II. He has seven children and lives in Texas with his wife Mary.