Some Things You Might Not Know about Vet Centers 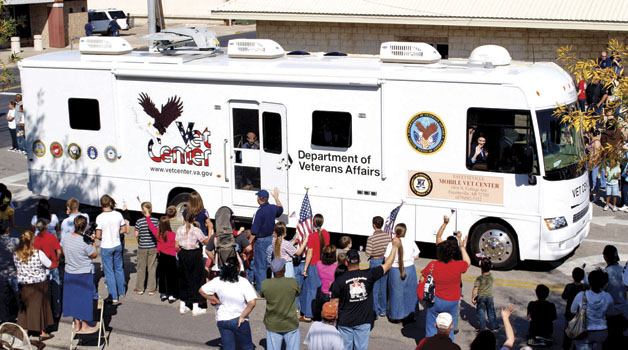 As I mentioned in a previous post, we’ll be discussing the three administrations that comprise the Department of Veterans Affairs to help you better understand the role of each and how they each provide a unique service to Veterans.  We’ll profile the Veterans Benefits Administration and the National Cemetery Administration later, but we start with the Veterans Health Administration, the largest component and the one most Veterans interact with on a regular basis.

If the administrations are like the branches of the military, then the Veterans Health Administration (VHA) is the Army.  It’s the largest of the three, boasts the biggest budget and has far more employees than the other two combined.  Out of 280,000 full-time employees that staff VA, nearly 250,000 work in the health care system of VHA.  Doctors, nurses, clinicians, x-ray techs, counselors and everyone you encounter at your local VA medical facility fall in that group.  They all work in a concerted effort to provide physical and medical well being to Veterans, who are encouraged to enroll pending eligibility.  Many myths surround health care eligibility, which we have previously debunked.

There are so many VA health programs that it would be a nearly endless task to describe them all, though you can use an alphabetized list on our VHA home page to find more information about specific topics.  From Agent Orange to Women Veterans Heath Care (sorry X, Y and Z), information on what you are looking for is likely in that tab. But what about other aspects of VHA, the things you probably should know about but aren’t particularly aware? Periodically, we’ll detail the many different components of VHA so that you can walk confidently into your local VA facility and know what you need and how to get it.  Today, we want to talk a little bit about Vet Centers and the unique role they play for the readjustment that combat Veterans face after returning from overseas.

View the Section 508-compliant version of this video

Vet Centers may have lower visibility than regional offices and medical centers, but the services they provide are just as important. They were created in 1979 after it was determined that Vietnam Veterans had sustained readjustment difficulties after coming home from war.  Since the first Vet Centers started up around the country, they have been offering mental health-centric services like individual, group and family therapy, military sexual trauma (MST), employment assessment, drug and alcohol treatment and more.  Eligibility for Vet Centers can be determined easily: if you or a family member were deployed to a combat zone, you qualify for services.  The centers are all around the country, augmented by 50 Mobile Vet Centers reaching rural areas.  By the end of 2011, 300 Vet Centers will be open in the United States and surrounding territories.  In response to the growing number of combat Veterans from Iraq and Afghanistan, 91 Vet Centers have opened since 2007.  Check to see if there is one near you.

What makes Vet Centers unique to, say, a community based clinic or a VA medical center?  The difference is in both the approach to Veterans and services provided.  Vet Centers are staffed by mental health and family professionals like psychologists and social workers who have specialized training to deal with the unique challenges associated with combat Veterans, like post traumatic stress disorder.  They also offer services for families of war Vets.  All this is done in an environment that is as welcoming and non-clinical as possible.  Some Vet Centers are in small offices and buildings, a far cry from the sprawling campus of hospitals and clinics.  Artwork and photographs from Veterans may adorn the walls to give the space a more informal and welcoming feeling.

Vet Centers are also strongly encouraged to hire combat Veterans to staff the offices.  War Vets are given hiring preference when applying, and it would be difficult to think of a component of VA that would benefit more from hiring Veterans who have previously deployed. Unfortunately, some Vet Centers are staffed more than others; Congressional mandates allow for the most in demand parts of the country to fill first, with other areas following.  Soon, all Vet Centers across the country will resemble one another in terms of available services and employees, ready to help combat Veterans manage the lifelong challenges of coming home after war.

VHA is an enormous and understandingly confusing organization, so we hope these periodic entries can help explain the parts of the health administration in order to gain understanding of the whole.  Your time is valuable, so the more you know walking through the door, the better off you’ll be.

Take a look at the directory at VHA’s home page and let us know what you want us to discuss next.