Home / Health, Research / Veterans share their stories on a VA podcast that emphasizes the importance of research 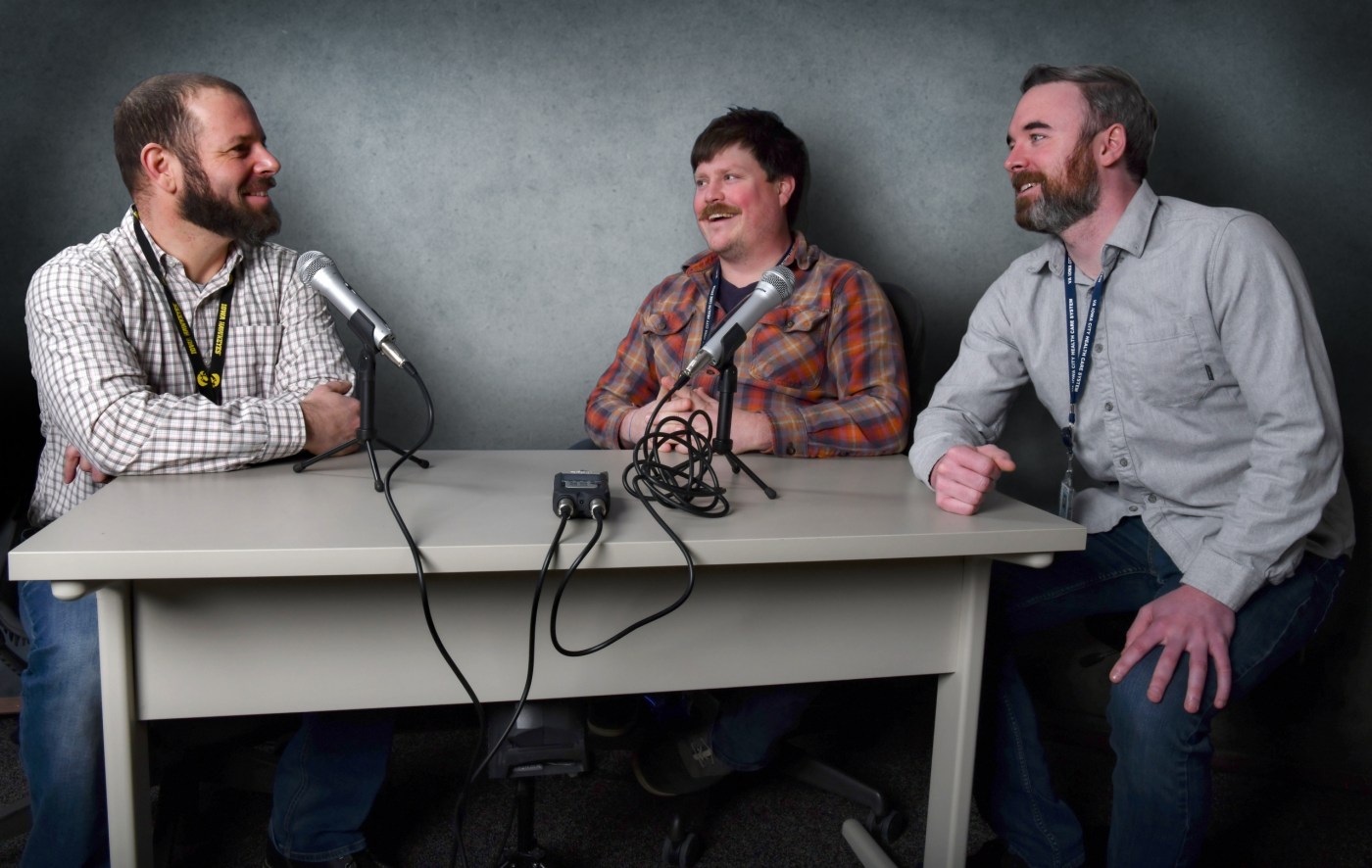 Making sure Veterans are heard and communicating research to Veterans and a general audience in a coherent manner. That’s the goal of two researchers at the Iowa City VA who are hosting a podcast that is aimed at speaking to Veterans and giving them an open platform to share their stories.

Dr. Levi Sowers and Brandon Rea are hosting the Vets First Podcast, one of six shows in the VA Podcast Network. The podcast is in its third six-month season. Sowers and Rea, who are both associated with the Center for the Prevention and Treatment of Visual Loss at the Iowa City VA, have completed about 20 episodes thus far. Each one has been 20 to 30 minutes in length.

Last year, one of their guests was Army Veteran Josh Marino, a Veteran peer mentor and an education and outreach coordinator at the Human Engineering Research Laboratories, a joint project between the VA Pittsburgh Healthcare System and the University of Pittsburgh. On the broadcast, Marino told a harrowing story when he was deployed in Iraq.

`Moved my brain around’

While Marino walked on a road with his Army unit in the Iraqi capital, Baghdad, in June 2007, three enemy mortars landed seconds apart. A five-foot-high wall protected him from most of the debris and shrapnel. But the shock waves permeated the wall and “moved my brain around in ways that a brain is not supposed to be moved,” he said on the podcast.

Marino was diagnosed with a concussion and shock. Later examinations showed a traumatic brain injury (TBI) with post-concussive migraines, as well as PTSD.

While on deployment, Marino became confused, forgetful, angry, and depressed, and he struggled to perform his regular duties. “The depression took me to a very, very dark place, and I was quite ready to take my own life,” he said.

Just moments from that fateful decision, he sat on the stairs of his barracks smoking a cigarette when a little cat came from underneath the bushes. “I grew up around animals. They had always been a heavy influence on my life. So seeing this little, tiny thing that needed help from me kind of made me realize that maybe there is another path, maybe there’s another escape hatch, so to speak, away from the PTSD, away from the depression. Maybe I could do something that could address my own anxiety while helping other people.”

Today, with his work at the Human Engineering Research Laboratories, he’s doing just that.

Some of the episodes in the Vets First Podcast have featured one interviewee. But the majority have paired a researcher and a Veteran on separate segments. In the case of their podcast featuring Marino, Rea and Sowers followed up by interviewing Rob Otto, the suicide prevention coordinator at the Iowa City VA.

Why the name Vets First Podcast?

“We really wanted to put Veterans first,” Sowers says. “Let them tell their stories and explain the problems they have and let researchers and other Veterans hear about that. Then try to show or demonstrate how VA is approaching those problems in a way that Veterans and researchers can understand. A lot of these topics are super-complex, even for someone like me who’s in the field. It’s important for us to communicate that clearly to the Veteran, like how working on mice helps Veterans in the long run.”

The hosts hope that Veterans will hear the stories on the Vets First Podcast and know that they are not alone and isolated. They want the podcast to also foster communication and networking among former service members.

“A lot of times, Veterans’ stories aren’t well-heard,” Rea says. “This is a way for them to communicate what has happened to them and what they’re experiencing, and for the general population to know that the government is investing in research to help Veterans. The target audience is also researchers.”