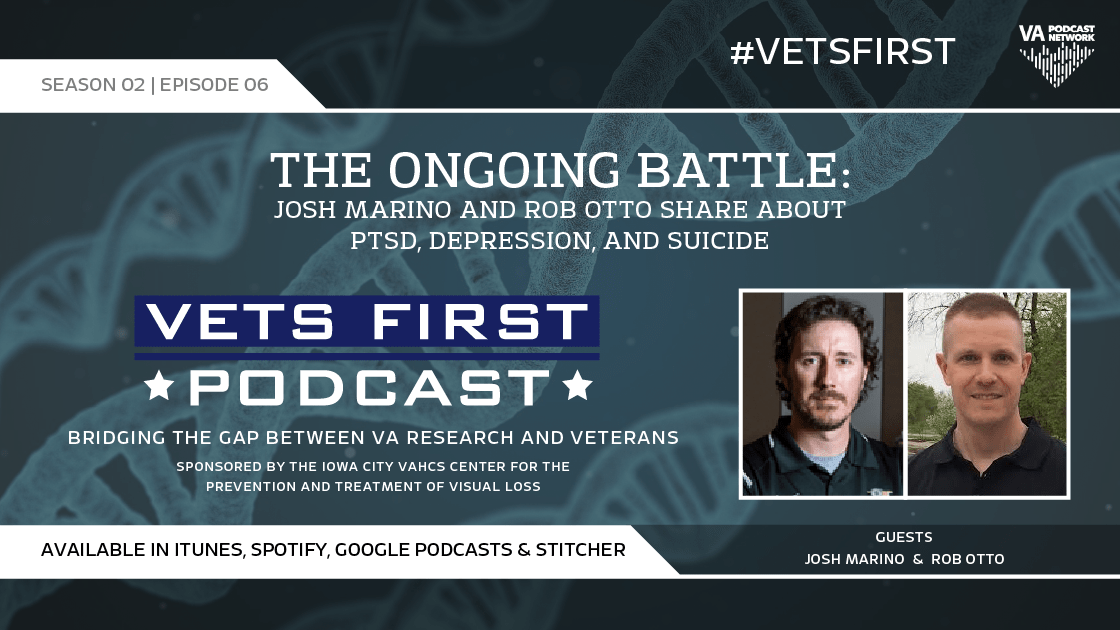 In episode six, Vets First Podcast hosts Levi Sowers and Brandon Rea interview Army Veteran Josh Marino to discuss the traumatic brain injuries (TBI) and internal injuries sustained during his service. Podcast listeners will hear about Josh’s early life, his time in the Army, sustaining a head injury, and his life experiences managing the injury. Josh discusses the mental health struggles following his injury, social stigma surrounding internal injuries, and his struggle for identity and purpose after being discharged.

Josh served as a 25 Sierra, specifically in satellite communication where he performed both tactile and strategic tasks. He deployed in Korea, and then served in Kansas to set up the brigade. Josh again deployed in Iraq, where he sustained a head injury from the shock wave of an indirect fire attack. He suffered from TBI, post-concussion syndrome and headaches, which he still experiences to this day. Josh identifies suffering from post-traumatic stress disorder (PTSD), depression and anxiety. He made headlines in 2017 after he rescued a stray cat, Scout. Josh attributes Scout for saving his life. Watch the heartwarming film below of the mutual rescue between Josh and Scout. Josh currently seeks support from the VA as well as counsels’ Vets at VA.

Traumatic brain injury (TBI) is a disruption in the normal function of the brain that can be caused by a bump, blow or jolt to the head, or penetrating head injury. The most common type of head trauma from recent conflicts are blast wave injuries. Two of the most prevalent problems reported by military personnel following traumatic brain injury are headache and photosensitivity (light sensitivity), which commonly occur together in migraine-like headaches.

VA provides care and support for Veterans suffering from TBI. All Veterans who served in combat are screened for TBI. Treatment options for TBI include cognitive, speech, physical, and occupational therapy, coinciding with medication and assistive devices. Click the link to learn more about TBI treatment at the VA. VA also offers counseling services to Vets to support treatments of related conditions.

In the second half of this episode six podcast, Levi and Brandon interview Rob Otto. Listeners will hear about Rob’s early life, career in the military, and life after service and experience with mental health. Rob discusses PTSD among Veterans and suicide prevention at the VA.

Rob is an Iowa native and Air Force Veteran. He began his military career in Air Force ROTC and received his undergraduate degree in sociology at the University of Iowa. Rob served in active duty for six years, advancing to captain where he was a personnel officer leading teams, project management and administrative work. He attended the police academy and worked as a police officer. Rob is now the suicide prevention coordinator and a social worker at the Iowa City VA where he counsels Vets.

VA reports in 2018 the average number of Veteran suicided per day was 17.6, and the rate of suicide among Veterans who received recent VA care decreased by 2.4%. As of 2020 findings, there have been no significant increases. The VA supports Suicide Prevention. VA S.A.V.E. Training helps people to support those in a crisis or experiencing suicidal thoughts.

If you or someone you know is having thoughts of suicide, contact the Veterans Crisis Line to receive free, confidential support and crisis intervention available 24 hours a day, 7 days a week, 365 days a year. Call 1-800-273-8255 and Press 1, text 838255, or chat online at VeteransCrisisLine.net/Chat.