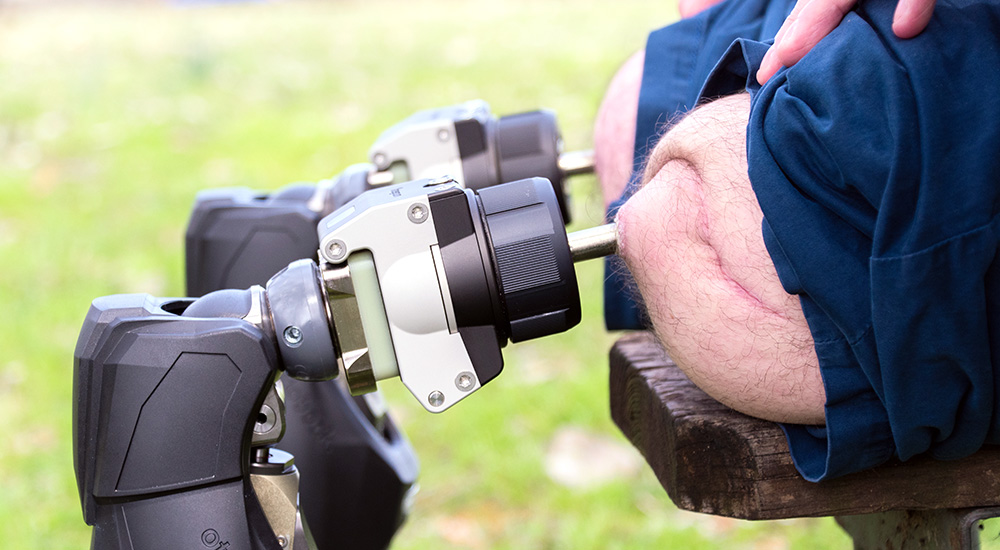 With more than 20 ships named in their honor and over 2,000 decorations of valor awarded, Navy Corpsmen have a well-deserved reputation for bravery and service to their troops. This dedication to duty often comes at a high cost, and for Ken Swartz, the cost was his legs.

The wrong spot was an IED, which Swartz said almost surgically removed both his legs due to the blast.

The IED blast ended Swartz’s Navy career. He returned to the States, where he re-entered civilian life and adapted to a new life without legs.

“Getting regular prosthetic sockets wasn’t an issue for me. Things were going fine until I had a fall in 2018,” Swartz continued. “I tore a muscle. It took over five months of healing and rehabilitation until I was able to get back to walking again.”

The fall was enough to make him consider osseointegration, a new treatment option that would give him greater freedom of movement.

Technology has been a game-changer for amputees, providing independence for our Veterans.

Osseointegration – more specifically, the Osseoanchored Prostheses for Rehabilitation of Amputees (OPRA) Implant System – consists of two parts. There is an anchoring element (the fixture) and a skin penetrating connection secured with a screw (the abutment).

The prosthetic knee is attached to the abutment using a component that secures using a chuck-like tightening feature. This makes it quick and easy to put the limb on and go.

“The process of implanting metal, in this case titanium, directly into bone has been around for decades. It’s most commonly used in dental work,” said Patty Young, VA’s national program manager of the Amputation System of Care. “This technology has been a game-changer for amputees by providing a greater sense of mobility and independence for our Veterans.”

The OPRA Implant System eliminates the socket and socket-related problems such as skin irritations, ulcers and excessive perspiration, and allows a greater range of motion leading to more mobility.

“It’s a complex procedure with a two-stage surgical approach process over the course of six months and a time commitment to rehabilitation of over one year from the first surgery,” Young said.

“I love the freedom osseointegration has provided me.”

Osseointegration may be appropriate for those who have experienced amputation due to trauma or cancer, and for those who experience difficulty with rehabilitation using a conventional prosthesis.

While rehabilitating from his fall, Swartz made the decision to try osseointegration through Johns Hopkins Medical Center. After a few delays in device manufacturing and COVID-19 limiting surgical procedures, he underwent his first surgery in October 2020. His second surgery was April 2021 and, six weeks later, he was able to do weight bearing rehabilitation.

“Balance was pretty easy for me because I had been walking on prosthetic devices prior to the surgery and, by December 2021, I was pretty well done with my rehab,” said Swartz. “I am lucky that I live in northern Virginia and had surgery and rehabilitation in Maryland, so I was able to go home at night.”

Osseointegration has given Swartz a newfound freedom in both his personal and professional life.

“I love the freedom osseointegration has provided for me,” said Swartz. “It’s helped more in daily life. I can stand longer than I used to stand. That helps in my professional life because I don’t have to worry so much about the physical limitations. I have better balance and alignment, and that helps in the gym and gives me greater confidence. Traveling is easier too. Recently I drove from Virginia to Massachusetts, and it was awesome to not have to take off prosthetic legs in order to drive.”

In January 2022, VA began offering the newly FDA-approved OPRA Implant System for use in patients with above knee (transfemoral) amputations. Today, Veterans can receive osseointegration surgeries and rehabilitation care at several VA Amputation System of Care specialty locations across the country.

The osseointegration screening process starts with your local Amputation Care Team. It continues with the Regional Amputation Center (RAC) or Polytrauma Amputation Network Site (PANS) for secondary screening before referral to the surgical team.

Learn more about the Osseointegration and VA Amputation System of Care.

By Dr. Joseph Webster is a physical medicine and rehabilitation physician in the Veterans Health Administration