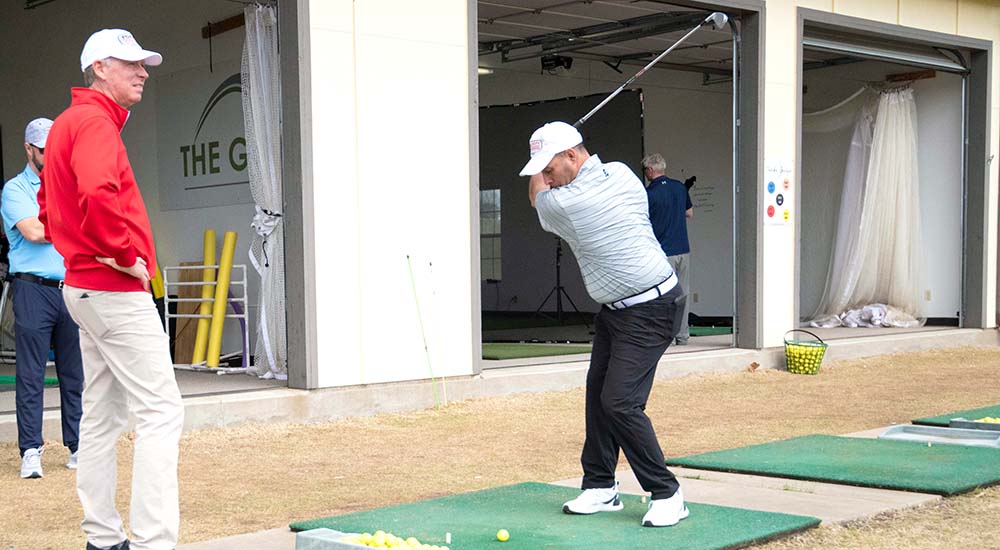 Robert Rodriguez played his first round of golf at 29 while still in the Air Force. He quickly fell in love with the game.

“A friend at work invited me to play and I just enjoyed it,” said Rodriguez. “I just took a passion for it. It’s a very challenging game.”

When he got out of the military, he played sparingly.

“I tried to play as soon as I retired,” he said. “But at that time, I didn’t have many friends. It was hard to get out and meet new people to golf.”

At Eastern Oklahoma VA, where he works as an IT specialist lead, Rodriguez became friends with Marine Veteran Waco Blakley, a VA Health systems redesign coordinator. Blakley is also a PGA HOPE (Helping Our Patriots Everywhere) ambassador in Tulsa. He invited Rodriguez to attend the first PGA HOPE class in spring 2021 at Indian Springs Golf Club.

The program is free to Veterans and is funded by PGA REACH, a charitable foundation with a mission to positively impact the lives of youth, military and diverse populations.

The PGA has an agreement with VA that lets VA recreational therapists refer Veterans to the program as a form of therapy.

“It’s giving me the opportunity to enhance my wellbeing,” said Rodriguez. “What I mean by this is I can get out and get some physical exercise but, more importantly, it gave me the ability to engage socially with others. Knowing that all the participants were Veterans made me feel better. We all had a common bond and, by the third lesson, we all seemed to be able to talk to one another and even shared some of our military experiences.”

Prior to the first class in 2021, Blakley laid the groundwork for the Eastern Oklahoma VA Health Care System to refer Veterans to the program.

Helps Veterans assimilate back into their communities

“Waco has been instrumental in bringing the program to us,” said Dr. Nathan Williams, Whole Health director. “It’s a wonderful opportunity for Veterans to learn a new skill, encourage activity, build camaraderie with other Veterans, and enjoy the wonderful game of golf.”

Kyley Tetley is the PGA director of instruction at Indian Springs. He said it has been rewarding to teach the game to Veterans, especially those who have never played before.

“Watching them learn how to play golf and see their reaction when they actually hit a golf ball and see it go in the direction they intended, it’s pretty cool,” he said. “Once I realized how rewarding it is for them and what they get out of the program, it meant that much more to me.”

The PGA professionals are also certified in adaptive golf and military culture.

“It makes it a great environment for Veterans of any era who choose to participate, especially our Veterans who recently left military service,” said Blakley. “PGA HOPE helps Veterans assimilate back into their communities through the social interaction the game provides.”

Making the program an extra bit special is the opportunity for local Veterans to participate in the nationwide PGA HOPE Secretary’s Cup. That tournament will be held this year at Indian Springs on May 16.

This annual event started in 2016 and is held during the week of the PGA Championship. It is named after the Secretary of Veteran Affairs in recognition of the agreement between PGA REACH and VA. Each team is made up of four Veterans and one PGA or LPGA professional.

Rodriguez is one of the four local Veterans selected to participate in the prestigious tournament.

“It is an honor to be asked to represent South Central PGA HOPE Chapter in the Secretary’s Cup,” said Rodriguez. “I am thankful to PGA professional Tetley for selecting me. I have high hopes that our team can win. We have two players who are strong off the tees and two who are great with their short game.”

PGA HOPE currently has a waiting list for the Tulsa chapter, but Blakley said the program will add new chapters in the Tulsa metro.

“We are excited about a new chapter starting this spring in Owasso at Bailey Ranch Golf Club,” he said. “Future plans include adding another chapter in Tulsa for 2023 to expand opportunities for our Veterans.”