Korean era Veteran leaves behind a legacy of service 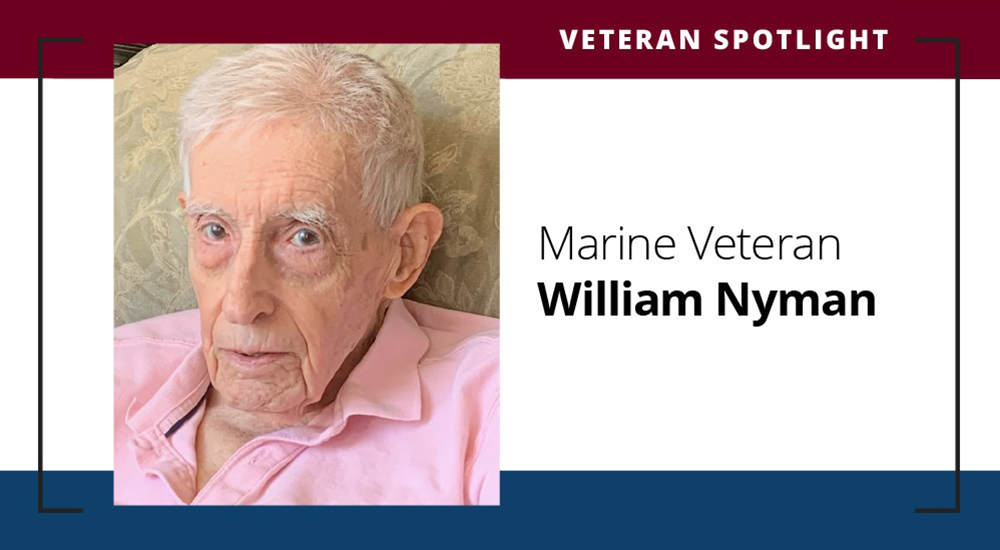 President Harry Truman once said, “Do your duty and history will do you justice.” Korean War Veteran William Nyman did his duty. Now, the latter part of Truman’s promise is proving true.

On Dec. 1, 1950, North Korean troops attacked Nyman’s encampment near the Chosin Reservoir. As he heard the enemy’s advance, Nyman threw off his sleeping bag. He grabbed his gun, rushing outside to protect his fellow Marines without even putting shoes on.

North Korean troops had Nyman pinned down for several hours, but he refused to surrender. He was finally carried to an aid station after being knocked unconscious by a grenade.

It was not until seven decades later that Nyman shared his story. Like many Veterans, service seemed to be in his DNA. He credited his Marine father as his inspiration for joining the military.

Stunned to learn Nyman had never been honored

When Anthony Irby, Nyman’s Veterans Benefits Administration (VBA) representative, accessed his records earlier this year, he was stunned to learn of Nyman’s heroism in Korea. He was in disbelief that he had never been formally honored for his actions.

“For unusual gallantry and extraordinary fidelity.”

Irby met Nyman when the Marine Veteran was living at West Lane Home, an Arizona-based facility that cares exclusively for Veterans. Nyman had used his savings account to pay his rent. When Nyman’s savings could no longer support his expenses at the facility, the team at Golden Life refused to stop caring for the Veteran. The facility’s manager, Rebecca Siddiqui, believed Nyman served his nation honorably. She felt she was responsible for doing the same for him.

Siddiqui reached out to Phoenix VA  to learn if any VA programs could help him. She describes the response she received as “phenomenal.”

VA’s homeless programs quickly stepped in to cover the cost of the Veteran’s rent, ensuring Nyman could continue receiving excellent care from his team while also benefiting from the support additional VA caseworkers could provide.

The staff at Golden Life appreciated Nyman’s sweet demeanor and love of sweets. His favorite activity was stopping for ice cream on the way home from his doctor’s appointments.

When he began to receive support from hospice, his care team believed the Veteran with a heart of gold deserved a Purple Heart. Irby nominated Nyman for the prestigious medal. Coined by President George Washington, the medal honors, “Not only instances of unusual gallantry, but also of extraordinary fidelity and essential service.”

We will never forget

From his service in Korea to his final battle with COVID-19, Nyman’s bravery reminds us of what it means to be a hero.

Thank you, William Nyman, for your service to our nation. May you rest in peace knowing that your country is forever indebted to you. We will never forget you.