Lost his wife of 55 years, needed to make a change 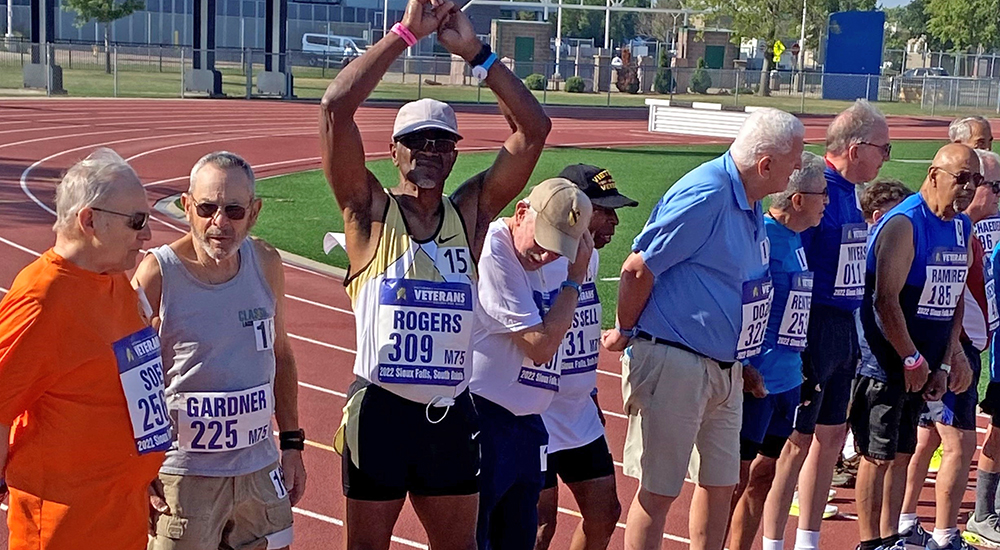 Following the recent passing of his wife Gwendolyn of 55 years, Army Veteran Owen Rogers Jr. felt like life was over and he was having difficulties coping.

“My wife was it. She was everything. She was the force behind me. I met her in May of 1965 at the Royal Peacock in Atlanta. September of 1966, we got married,” said the 76-year-old Rogers.

Admitting he needed help, Rogers went to see Recreation Therapist Chauncy Rozier at the Atlanta VA, whom he knew from past inpatient care. Timing was good for the intervention because of the upcoming National Veteran Golden Age Games in Sioux Falls, South Dakota; Rozier suggested he try to attend.

Rogers began his strategy with the help of his family and Coach Rozier.

They created a workout regimen and plan to rebuild his strength and health. He trained with his daughter Tissilli Rogers-Wood and son-in-law Kendall Wood in preparation for the events.  He reported how his training was going and what, if any, difficulties. He embraced a new edge on life through adaptive sports.

“I have to have my support system to continue to be successful,” Rogers said.

Initially, Rogers was placed on a waiting list by the games. Rozier wrote a special request letter for him to be accepted so he could, “Gain another leg on life.”

“I basically pleaded for this Veteran to have this opportunity and they heard it,” Rozier said. He was accepted.

“His attendance meant so much to him as these games were on the dates of his final time with his wife trying to save her life, but to no avail. One of the dates we were in Sioux Falls was the anniversary of her passing,” said Rozier.

According to the event planners, nearly 400 Veteran athletes, ranging in age from 55 years to 90+, participated in the National Veterans Golden Age Games, which ended on July 23 in Sioux Falls, South Dakota.

To show support, Tissilli, Kendall and their other sister, Tammy Rogers-Cooke, flew out to be with him on his new efforts in life, and it meant the world to him. “My dad is a strong man. He is mentally tough,” said Tissilli. “I am honored to be able to serve my parents and am proud of my dad.”

It all paid off. Rogers received a silver medal in boccia ball mixed doubles, a bronze in shuffleboard, along with ribbons in discus, javelin, 1500mm Powerwalk and shot put. In all, he partook in six events.

Participation in adaptive sports has provided a new outlook on life for Rogers, yet something else is now playing a major role in his journey: Just before leaving Atlanta, Rogers received an electric guitar from Guitars 4 Vets. This was arranged by Community Development on Civic Engagement and Dr. Anthony Cooper.

Sings in honor of his wife

Guitars 4 Vets pursues its mission to share the healing power of music by providing free guitar instruction, a new acoustic guitar and a guitar accessory kit in a structured program run by volunteers.

Rozier said, “He brought his guitar along and found time to make it over to the Sioux Falls VA, and he played for the Veterans and their families there.”

“I told Dr. Cooper what I wanted to do. It makes me feel good,” said Rogers. “It is like medicine to me and I do this in honor of my wife.”

No stranger to performing, while in Vietnam, he sang on the ships for the sailors.

Rogers has been getting treatment at Atlanta VA since June of 1968. The facility had only been open four years when he first arrived. “Dr. Joseph Bishop has treated me for 30 years. He is one of the best. All of the people who have helped me have been good. If they are not, I won’t stay with them,” Rogers said.

His advice to other Veterans concerning treatment at the Atlanta VA is quite simple. “You need to talk to the Veterans. Most Veterans will tell you. Everything ain’t perfect but you can get everything you need.”