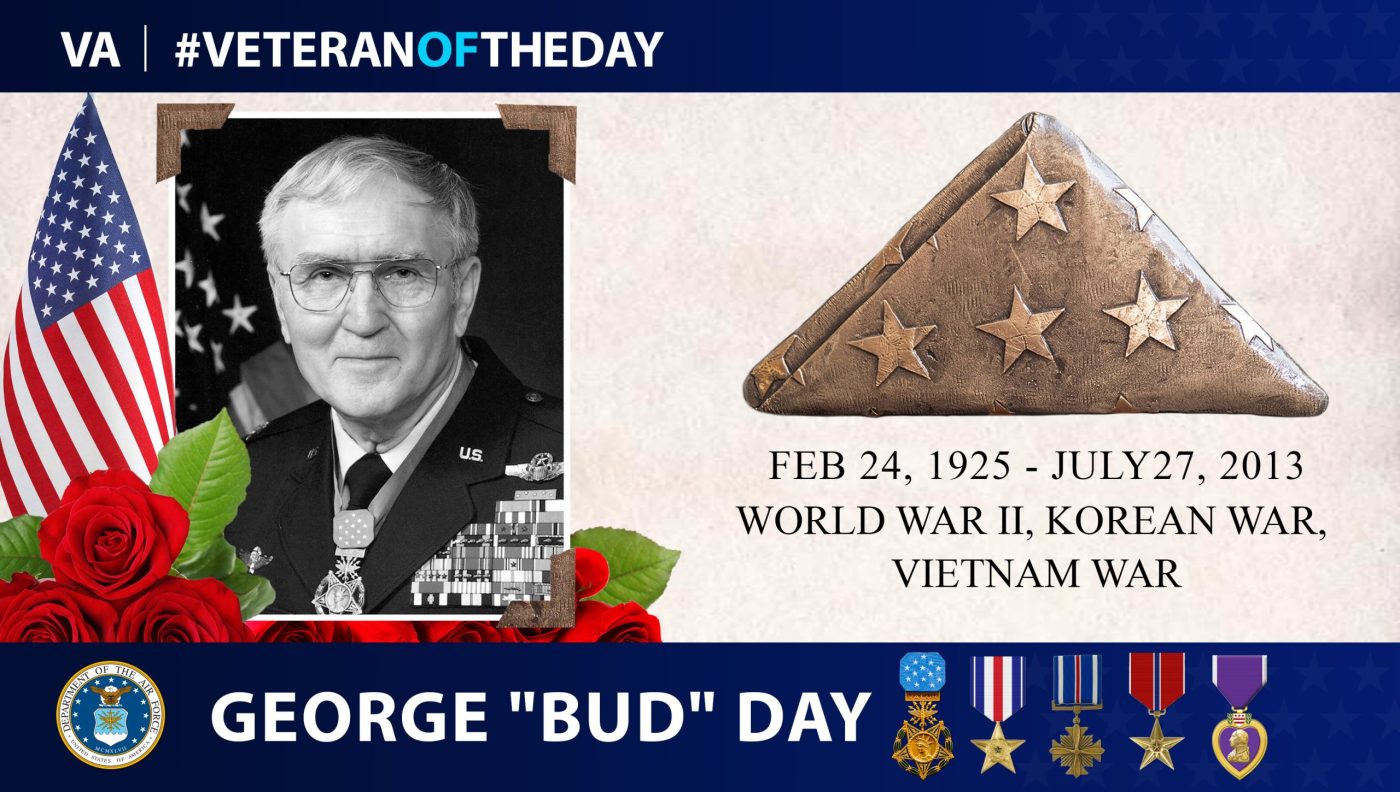 George Everett “Bud” Day was born in February 1925, in Sioux City, Iowa. He began his military career at age 17 when he dropped out of Central High School to enlist in the U.S. Marine Corps. He served for 30 months with a gun battery group of the 3rd Defense Battalion on Johnson Island, and was discharged in November 1945. He joined the Army Reserve and served until December 1949.

During his time in the Reserve, Day earned a law degree from the University of South Dakota. In May 1950, he was commissioned a second lieutenant in the Iowa Air National Guard. He was called to active duty in March 1951, completed pilot training at Webb Air Force Base in Texas and received his pilot wings. He also completed training at All-Weather Interceptor School.

Starting in February 1953, Day piloted the F-84 Thunder Jet in the 559th Strategic Fighter Squadron. He deployed to Hokkaido, Japan, then Misawa, Japan, to provide squadron support during the Korean War. Next, he served as an F-84 and F-100 Super Sabre pilot with the 55th Fighter Bomber Squadron, 20th Fighter Bomber Wing, as well as the wing staff at RAF Wethersfield, England.

Afterward, Day became an assistant professor of aerospace with the Air Force Reserve Officer Training Corps detachment at St. Louis University in Missouri. He attended the Armed Forces Staff College for Counterinsurgency Indoctrination training at Norfolk, Virginia. Next, he served as an Air Force advisor to the New York Air National Guard at Niagara Falls Municipal Airport, New York, and was promoted to major.

In August 1967, Day volunteered for duty in Southeast Asia and was given command of Detachment 1, 416th Tactical Fighter Squadron, Commando Sabre. The unit was also known as “Misty,” since that was his favorite song. In August 1967, while on his 65th mission of the war, he and his crew were shot down and forced to eject from his F-100F. Day was captured while the remaining crew escaped. He attempted an escape, traveling 25 miles for 10 days and crossing the Ben Hai River into South Vietnam. Only two miles away from a Marine base, he was re-captured by Viet Cong insurgents and spent 67 months as a POW. After enduring torture and beatings from North Vietnamese prison guards, he was released during Operation Homecoming in March 1973. He was awarded a Medal of Honor by President Ford in March 1976 and retired in December 1977 at the rank of colonel.