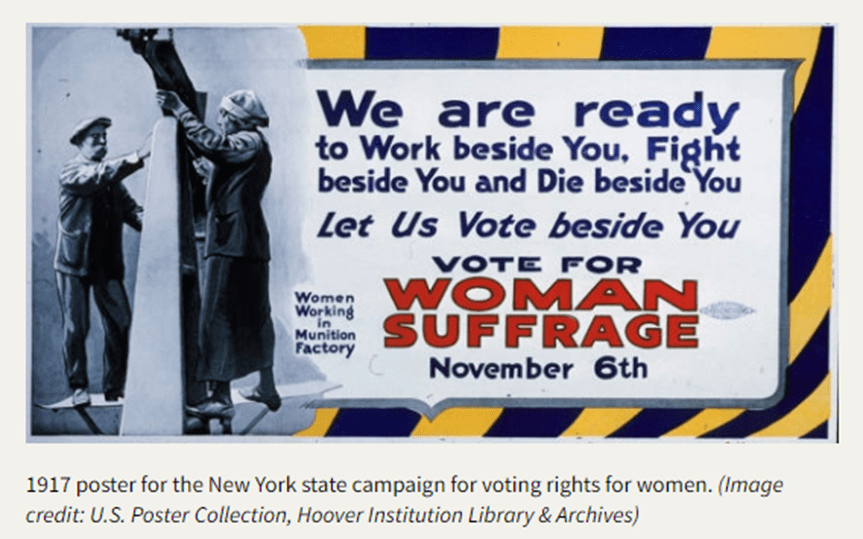 August 26 is Women’s Equality Day. One hundred two years ago this month, the 19th Amendment was ratified solidifying the right to vote for women. The battle was not earned over night, rather it took decades. From the Seneca Falls Convention of 1848 to World War I and beyond, it was an uphill battle for all women in the home to the halls of Congress.

World War I was the tipping point in their struggle.

When the U.S. formally entered the war in 1917, NAWSA president Anna Howard Shaw began mobilizing American women for the war effort and founded the Women’s Committee of the Council of National Defense. National American Woman Suffrage Association’s strategist Carrie Chapman Catt saw the support of women in the war effort as a patriotic demonstration of citizenship, and she was not wrong when she gambled that it would tip the balance toward women’s suffrage.

American women went to work en masse during the war, replacing men in the workplaces and carrying the load at home just as they had done throughout history. This time the value of the nine million women who joined the war effort became clear to all. Women worked at home in munitions and other factories, sewed surgical masks and rolled gauze as Red Cross volunteers. Librarians built makeshift libraries in camps and distributed nearly 10 million books and magazines to soldiers. Women volunteered to care for those who came home, often working with their children at their sides, while other women volunteered to care for the children of women who were working.

When we cast our votes, we do so on the shoulders of the millions of women who served during the WW1, as well as those who volunteered to serve as members of the U.S. Armed Forces.

Hello Girls – 7,000 applied but only 223 selected. They took the same oath, received the same pay and wore the insignia of the signal corps. They were sent overseas, some very near the front lines. However, they were not recognized as members of the military and did not receive Veteran status upon discharge.

Army and Navy Nurse Corps – 22,804 nurses served at home, abroad, and on hospital and troop ships as well as overseas, in France, Belgium, England and even Siberia. Many were wounded and more than 200 Army nurses and 36 Navy Nurse Corps nurses died in service.

During WW1, over 600 service women died in service to their country. Their sacrifices during the war only hammered home the equally great injustice they experienced back home as their own country denied them the same rights and privileges they were fighting for abroad.

On September 30, 1918, President Woodrow Wilson, who previously opposed women voting, finally stood before Congress in support of Suffrage, speaking these words: “We have made partners of the women in this war… Shall we admit them only to a partnership of suffering and sacrifice and toil and not to a partnership of privilege?”

On August 26, 1920, U.S. Secretary of State Bainbridge Colby signed a proclamation behind closed doors at 8 a.m. at his own house in Washington, D.C., ending a struggle for the vote that started a century earlier. In 1971, Representative Bella Abzug championed a bill in the U.S. Congress to designate August 26 as “Women’s Equality Day.”

Veterans have always been at the forefront of fighting for the rights of the people of the United States. The rights of the U.S. Constitution, including voting rights, belong to you. One of VA’s missions is to empower Veterans, and we are honored to support all Veterans and their families in this effort to register to vote and to use your right to vote at each opportunity. Please visit https://www.va.gov/initiatives/vote/ to find out more about this effort.