Passion to help those with disabilities 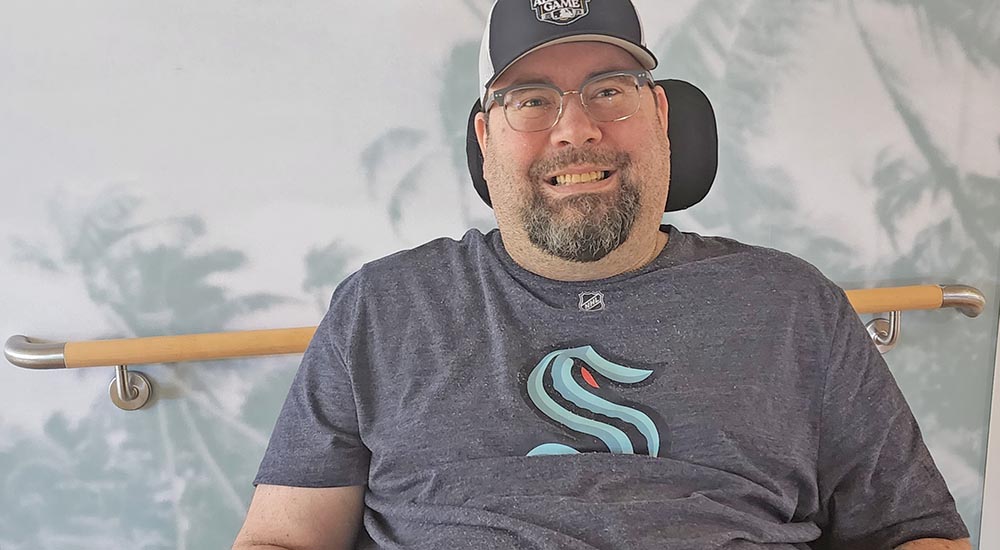 I enlisted in the Navy through the Delayed Entry Program, and began my basic training in 1991. I was a third generation seaman, with my grandfather serving during WWII, my father serving during the Vietnam War, and myself serving during Desert Storm. I was an electronic warfare technician, a position that works with radar detection. I served until 1994, receiving a medical retirement due to my MS diagnosis in 1993.

MS snuck up on me. My maternal grandmother and maternal great, great uncle had it, but when the left side of my body went numb for three days, I figured I just pinched a nerve. Then, the bottoms of my feet went numb, and I called my mom to tell her what was going on.

She told me to have someone check if I had MS, and lo and behold, I had it. Years went by before I decided to deal with my MS. I led an active lifestyle and my MS symptoms were mild, so ignoring it was easy.

Around 2010 my MS reared its ugly head, forcing me to retire from my job. I felt lost and found myself going to a dark place. The daily symptoms were a constant reminder that my body was failing me. I tried various DMTs. There were several caused side effects I couldn’t live with and I was unsure of trying more.

I learned why I was struggling

At one point, suicide felt like my only option to escape everything I was feeling and dealing with. Luckily, my attempts failed and I soon learned why I was struggling to escape the darkness surrounding me.

Through self-learning I discovered I’m an empath, taking in all the energy around me, positive or negative. I live in a Veterans’ home and am surrounded by people every day, people who have struggles of their own and traumatic experiences to overcome. Their emotions were flooding my senses, overwhelming me, and not allowing me to concentrate on my own thoughts and needs.

It took me a long time to learn how to cleanse myself and block the emotions around me. Once I did, my life was different, not just in how I felt but how I viewed the world.

In 2016 I couldn’t use my walker, so I started using my manual wheelchair. Five months later I didn’t have the leg strength anymore. I fell getting into bed. I was admitted to the rehabilitation ward at the Seattle VA where I spent three months. I got a power chair. I was going through a divorce and had to sell my newly purchased home. VA helped me find a supportive place to live also.

It was a challenging time for my MS that finally put me on a wheelchair, but I was not alone. VA kept me going.

One of the passions I discovered in myself was trying to help those with disabilities. While people with physical disabilities can do almost anything an able-bodied person can do, some of the mechanisms to help them achieve success have limitations.

I’m a huge hockey fan and though I wanted to attend one of the Kraken hockey games in Seattle, I found that because I was dependent on assistance to get to and from the games, I had no options for returning from a game in the evening.

I wondered if others had this issue, too, and decided I would try to make the community more aware of the needs of people with disabilities, at least surrounding this issue.

Soon, efforts gathered to collect funding to help Veterans with disabilities attend Kraken games, raising almost three thousand dollars in less than a day. While I was the first to receive the funding, the group was able to get several other Veterans to Seattle to attend a game. While I had watched Kraken games on tv, I had never experienced the energy of an NHL team and the experience was amazing.

I thought to myself, “This needs to keep happening,” and the nonprofit Kris’Krew, dedicated to getting disabled Veterans to Kraken games, became a reality. Someday, I’d like to expand to all sports and into different cities.

The importance of curiosity without judgement

I’ve found helping others has given me more purpose in life, and sometimes the motivation to crawl out of my dark hole when days are tough. In addition to Kris’Krew, I connected with a friend in Las Vegas who volunteers with a nonprofit focused on healing, strengthening communities, and creating equity for all people. Being a part of a group of people trying to help others and make the world a better place helps me see my future, our future, in a better light.

I get excited thinking of all the things we can do and how the organizations will grow and help so many.

Over the years, I’ve learned that I can’t let someone else’s reality become my own. I’m careful in my thinking as the outside world can influence us in ways we don’t realize or even always understand. I’ve learned the importance of curiosity without judgement.

While this isn’t always easy, I have a picture that I keep in the back of my mind to remind me that reality is what we make it. The picture is a small plant in a pot, with a quote that says “Sometimes, when you’re in a dark place, you think you’ve been buried, but you’ve actually been planted.”