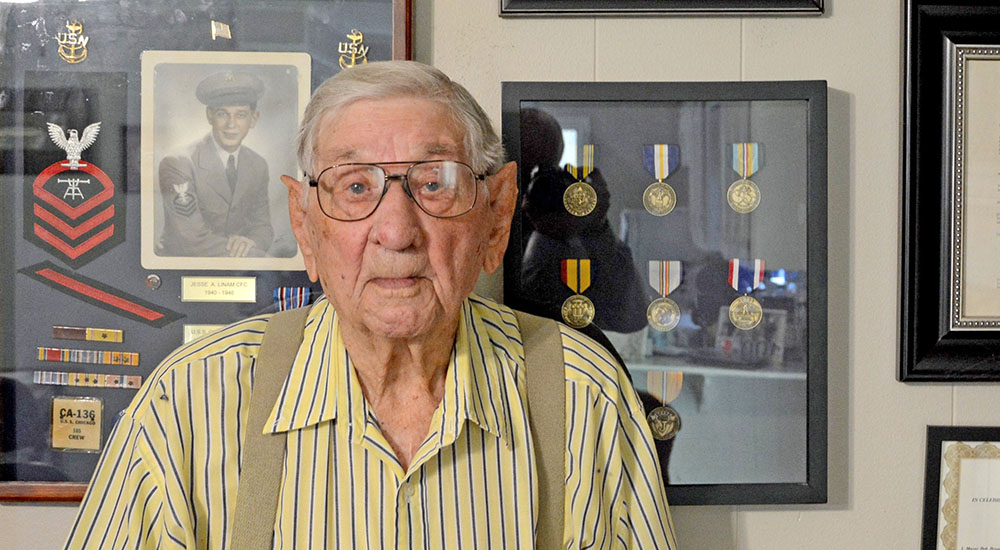 Navy Veteran Jesse Allison Linam was a chief fire controlman during WWII in the South Pacific from 1940 to 1946. He recounted several memories of his service to the team at VA’s Texarkana Community Based Outpatient Clinic.

“It was never a dull moment. We would watch those young fighter pilots come in for a landing and sometimes they couldn’t get the plane stopped in time,” said Liman. “It was one of my ship’s jobs to fish them out of the water. We never lost a pilot.”

Being a crewmember on USS Chicago meant your job was to engage in war and not just pull pilots from the drink. And the Chicago did engage.

“The Japanese thought they had us figured during the battle at Guadalcanal. It started with a B-25 Mitchell spotting a Japanese fleet coming out of Tokyo and reported it. It was determined that the fleet wasn’t headed toward our location, so we were told not to worry about them.”

According to Linam, reports kept streaming in that the Japanese fleet would change direction from time to time and maintained a slow cruising speed. The last report before night fell was that the fleet had turned toward the Chicago’s position but maintained a slow speed. Predictions were set for an early morning attack. It wasn’t until during the cover of night that everything changed.

“Torpedoes blew off our bow.”

“When the Japanese arrived a little after midnight, the ocean became illuminated with star shells and floats, and here we were protecting transports in no condition to fight. The Japanese fleet opened up on us. We lost four of the cruisers and torpedoes blew off our bow and damaged the superstructure.”

The Chicago swung back around to engage the Japanese,” said Linam. “By the time we got into the fight, our destroyers had sunk four of their cruisers. The rest of the Japanese fleet disengaged from the fight when they saw the Chicago coming back because they thought there was an aircraft carrier nearby. Why would a crippled ship reengage if it didn’t have some heavy backup?”

After the battle at Guadalcanal, the Chicago went to the shipyard to be repaired and refurbished with new guns and radar before heading back out to the Pacific. 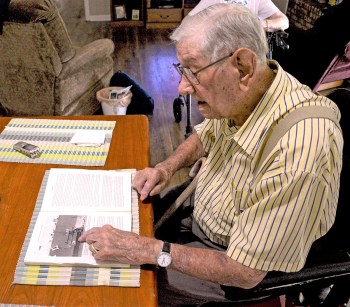 Navy Veteran Linam points to a picture of the USS Chicago

Linam and the Chicago’s last mission was to go back to the South Pacific and go island hopping, attacking Japanese bases and depots located on different islands. The Chicago met its demise while en route to attack a Japanese stronghold on the Island of Rennell.

“A friend and I were on lookout on the observation deck a little before midnight when we saw this Japanese scout plane dropping little blue flares,” said Linam. “As soon as the plane got overhead, it turned 90 degrees and kept dropping flares. Soon after, we were hit by four torpedoes. Apparently, there were several Japanese torpedo bombers waiting for the scout plane to finish marking our location before they attacked.

“We were able to do enough damage control to keep the ship from sinking and to get a tug to come out and tow us for repairs. A short time later as we were getting towed, another wave of torpedo bombers came in and hit us with four more torpedoes.”

The second round of attacks sealed the fate of the Chicago to a grave under the waves.

“Before I was able to abandon ship, I had two new sailors come running up to me and ask what they were supposed to do,” Linam said. “I told them to start running, and when they get to the edge of boat to jump off as hard as they can and to start swimming. They need to do this to get away from the ship or the vacuum from the ship going down will pull them under.

“One of the young sailors started crying and said he didn’t know how to swim. I asked him how in the hell did you get into the Navy, and he said that when he was asked that, he lied. I asked him if he knew how to dog paddle and he said yes. I told him I will run and jump off the boat with him and when he hit the water to paddle as hard as he could. We lined up and started to run. When we got to the edge of the boat I stopped… and he jumped.”

Before the ship gave its final salute, Linam was called to help the wounded get overboard.

“I was helping sailors in the infirmary get overboard. These sailors worked in the engine room and when we were attacked, the engine room was heavily damage and hot steam burned several sailors badly. I was approached by an engine room sailor asking for help to tie his life vest on. I put a loop in the waist belt of his vest and pulled it tight.”

Linam was injured when he was blown into a steel door and received shrapnel wounds to his foot. Today, he receives his care from VA.

I get good service from VA. They are very kind and eager to help. This new CBOC is marvelous. The doctors are great and I recommend them.”

Linam has been married for 77-years to his first love, Irene.