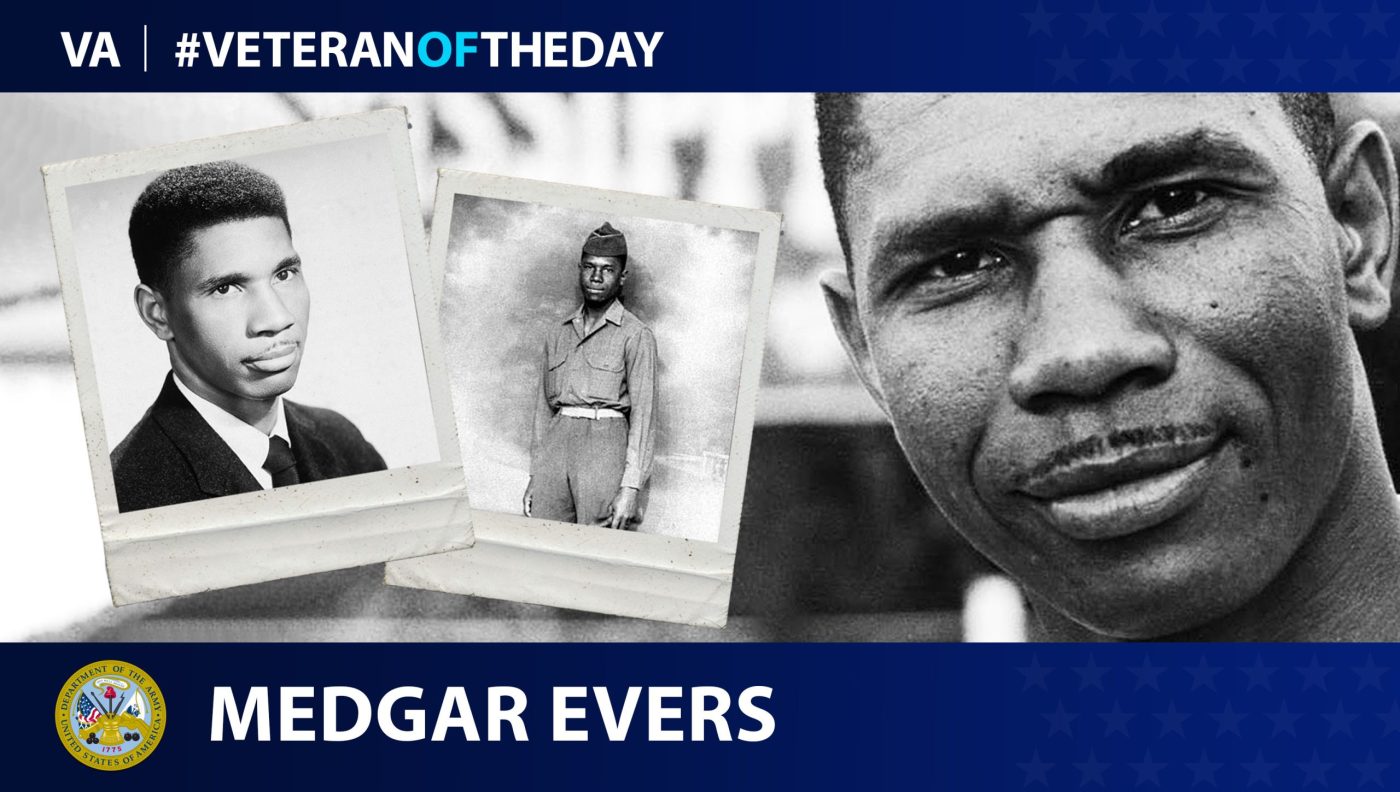 Medgar Evers was born in July 1925 in Decatur, Mississippi. Growing up in the South during the Jim Crow era, Evers experienced segregation, discrimination and racially motivated violence firsthand. Throughout his early childhood, he wondered why there were never any protests or any unified responses to violence against the African American community.

In 1943, when Evers was 17, he dropped out of high school and joined the U.S. Army. He served in the 325th Port Company, a segregated, all-Black unit tasked with unloading weapons, vehicles and supplies from transport ships. His unit took part in the famed Red Ball Express, which kept Allied units supplied following the successful Allied invasion at Normandy. Evers saw action in Liège and Antwerp, Belgium; and Normandy, Le Havre and Cherbourg, France. He was honorably discharged with the rank of sergeant in 1946.

Like many African American soldiers serving in World War II, Evers’ service in Europe boosted his confidence in fighting for civil rights back home because they experienced many more freedoms in the European countries they served in than in the U.S. Evers even told his brother, “When we get out of the Army, we’re going to straighten this thing out!”

Evers went on to attend what is now Alcorn State University, obtaining a degree in business administration in 1952. There, he met his wife Myrlie Evers-Williams, a future civil rights leader who would become chairwoman of the National Association for the Advancement of Colored People’s (NAACP) board of directors from 1995 to 1998. After graduating, Evers worked as a traveling salesman for an insurance company.

After traveling through impoverished Black communities in Mississippi for work, Evers was inspired to become an active volunteer with the local NAACP in Mississippi. With the NAACP, he coordinated boycotts against gasoline stations that denied African Americans access to their restrooms. Evers continued to take an active role in organizing and public activism, gaining the attention of national NAACP leaders and becoming Mississippi’s first field secretary for the organization.

Evers’ prominence as a civil rights leader made him a target of white supremacists. Just after midnight on June 12, 1963, hours after President John F. Kennedy’s historic speech asking Congress to enact civil rights legislation, Evers headed home from a Jackson Movement meeting. While walking up his driveway, a white supremacist shot him in the back. Evers died an hour later.

Evers was 37 when he was killed.