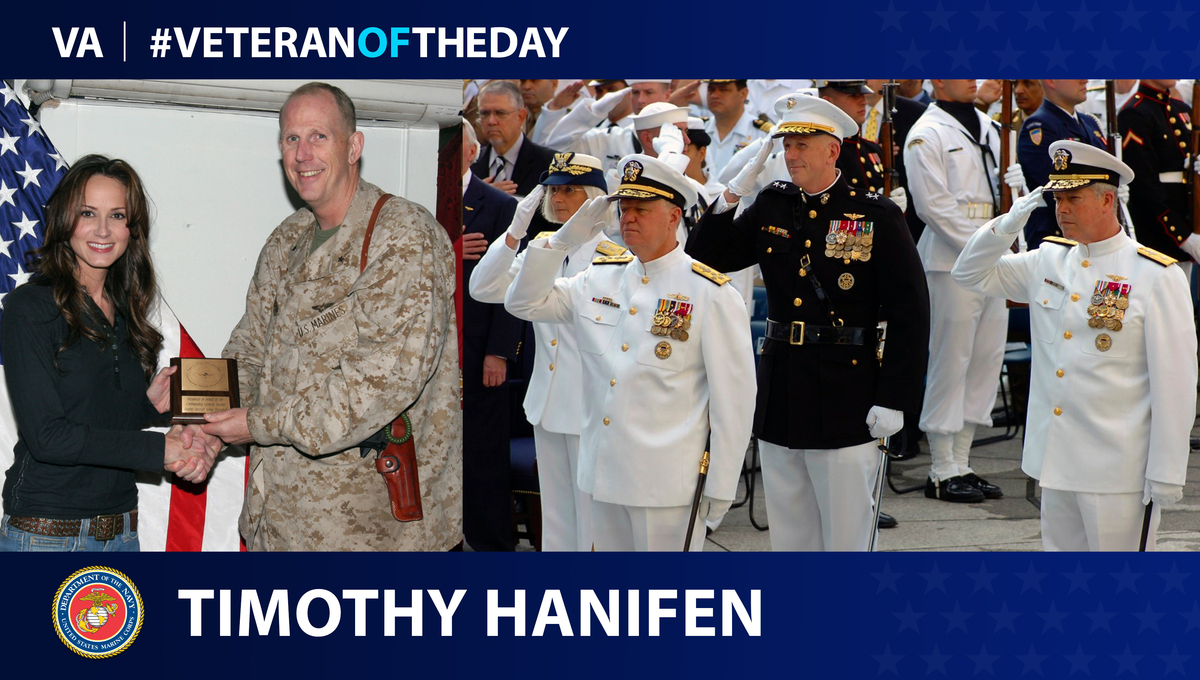 In 1974, at the age of 17, Tim Hanifen turned down his acceptance to West Point to attend the Naval Academy in pursuit of his childhood dream of becoming a United States Marine.

After graduating from the Naval Academy and attending flight school, Hanifen deployed in the early 1980s as part of a Marine Expeditionary Unit (MEU) responding to the 1983 bombing of the Beirut barracks. Hanifen was part of the Marine Medium Helicopter Squadron 263. While in Beirut, he served as the squadron’s weapons tactics instructor and trained air crews to land PVS5s on amphibious ships. He also worked with Delta Force to create contingency plans for the possibility of a noncombatant evacuation and rescue attempts for kidnapped CIA Agent Buckley. In 1984, his unit was one of the last to return to the United States.

Hanifen then received the opportunity to attend Marine Aviation Weapons Training School Squadron One, an elite weapons tactics instructor school. His success prompted the Marine Corps to offer him a teaching position there. To spend more time with his family, he instead took a position as an air crew training officer and rear security officer at the fleet of Marine Force Pacific Headquarters in Honolulu, Hawaii. He spent his evenings there writing a series of articles on the future employment of the MV-22 Osprey Tiltrotor aircraft. These three articles earned him the Marine Corps Association’s Roy S. Guyger Best Aviation Articles of the Year Award.

Due to his wife’s health, Hanifen resigned from the Marines after this assignment. He took a position with an Air Force agency and then with the State Department. Though he enjoyed his work in the State Department, Hanifen chose to return to active duty with the Marine Corps in 1988. After persistent letters and calls, including to the Marine Commandant and Secretary of the Navy, he was the only one out of 495 applicants allowed to return to active duty that year.

In August 1990, Hanifen joined HMM 365 as a tactical plans officer and deployed as a part of Operation Desert Storm. He set up the casualty collection system and helped to create the false pretense of a larger force during the ground campaign by faking a landing to give the Army more time for its assault.

Because of his previous articles on the Osprey, Hanifen was selected to be a requirements officer for the CH-46E Sea Knight Helicopter (the Osprey’s predecessor) and the MV-22 in 1992. Eventually, he moved to Aviation Plans and Policy as a MV-22 officer. After two of his friends died while flying the MV-22, the military placed the aircraft on probation. As an officer, Hanifen helped lead three Cost and Operational Effectiveness Evaluations, which helped get the MV-22 back in the air in 1994.

After continuing his education at the National War College, Hanifen served in the office of the Chairman of the Joint Chiefs of Staff at the Pentagon. It was there where he experienced the events of Sept. 11, 2001. After watching the first plane crash on television, Hanifen, who was a member of a 24-hour cycle for crisis action teams, received orders to stand by. Suddenly, a voice came over the intercom and ordered an evacuation of the building because the Pentagon had been hit. Hanifen’s office was located directly across the courtyard from where the plane crashed. In an interview with the American Veterans Center, Hanifen described the environment at the Pentagon the next day as being cathedral-like quiet, and angry, but not fearful. In 2002, he took command of Marine Aircraft Group 42, one of the first reserve Marine air units to be activated for duty in the Middle East. He left his command in 2004 to work for General Mattis in the Capability Development Directorate.

In January 2007, Hanifen achieved the rank of brigadier general and was assigned as the air wing commander and base commander at the Al Assad Air Base in the Al Anbar Province of Iraq. Despite his military success at the height of the Iraq War, Hanifen’s proudest moment from his 35 years of service was organizing a state visit for the presidents of America, Iraq and Kurdistan, as well as the Iraqi Prime Minister, within four days while serving as base commander.

After logging nearly 3,300 flight hours and earning the Defense Superior Service Medal, Hanifen eventually retired from the Marine Corps in 2013.