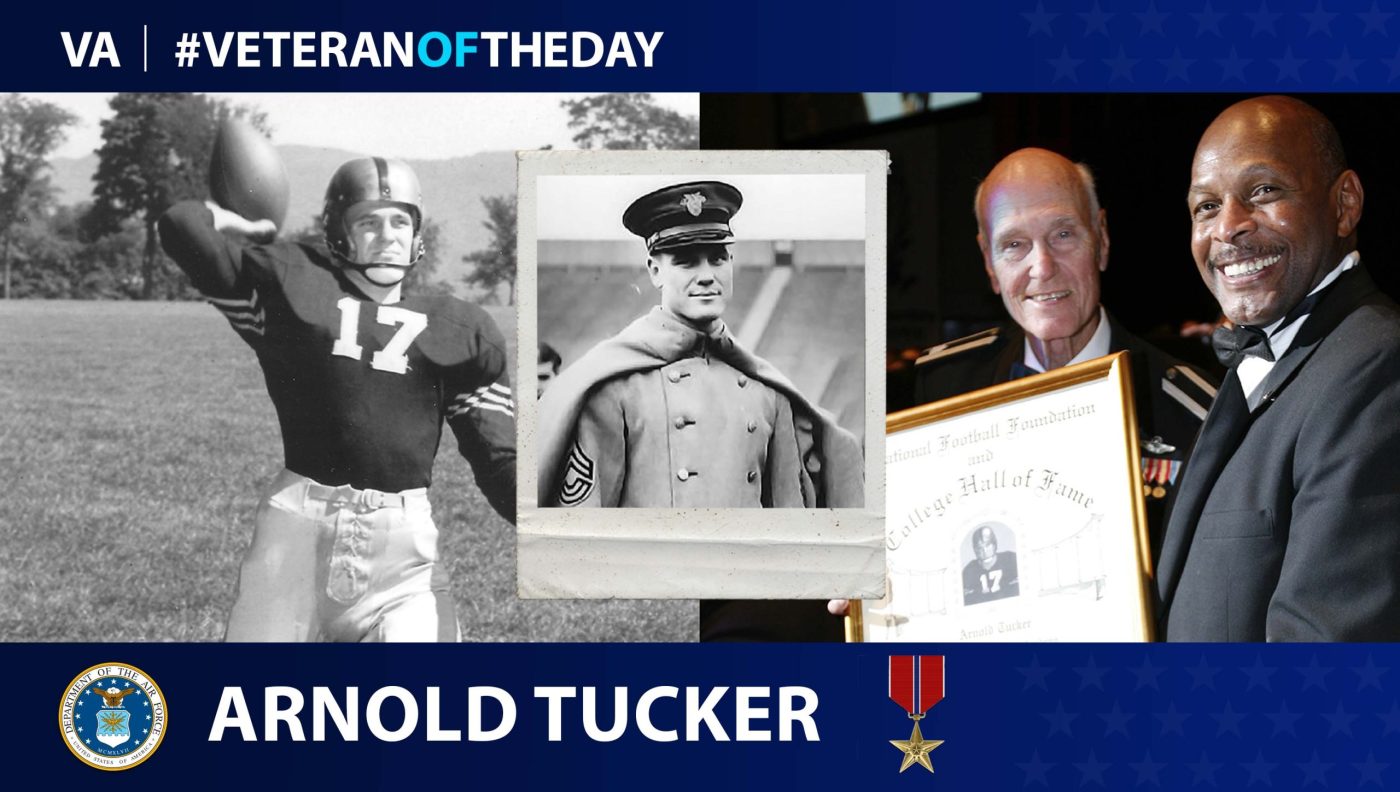 Air Force Veteran Arnold Tucker was respected by many, not only for his honorable time in service but also for his impressive career as a football quarterback. Growing up in Miami, Florida, Tucker graduated from Miami Senior High School in 1943 with two state championships under his belt. He then entered the Navy V-12 College Training Program designed to prepare students to be commissioned as officers upon graduation. He enrolled in the program at the University of Miami in Florida before being discharged in July 1944 to attend the U.S. Military Academy at West Point, New York.

Tucker first joined the West Point football team, the Black Knights, as the third-string quarterback in 1944. Alongside his teammates Felix “Doc” Blanchard, a fullback, and Glenn Davis, a halfback, Tucker led the team as starting quarterback during the 1945 and 1946 seasons. Together, they made up the famous 1946 Army backfield, commonly regarded as the greatest of all time.

The Black Knights achieved a 27-0-1 record across Tucker’s three years on the team, which also won national championships in 1944 and 1945 and tied with Notre Dame in 1946. Tucker lettered twice and was selected to be part of the 1946 College Football All-American Team. He played a critical role as quarterback, directing the team through each game as coaches were banned from calling offensive plays from the bench. Due to additional rules limiting substitutions, he also played several other positions on the team, securing countless interceptions as a safety. He was also captain of the Army basketball team his senior year.

In 1946, Tucker received the Amateur Athletic Union’s James E. Sullivan Award, which is presented to the nation’s best athlete. Alongside Blanchard, Tucker is one of only nine football players to receive the award. He was also the fifth choice for the 1946 Heisman Trophy, with the honor going to his teammate Davis. Tucker was inducted into both the College Football Hall of Fame and Army Sports Hall of Fame in 2008.

Following his graduation in 1947, Tucker was a tenth-round draft pick for the Chicago Bears but turned down the offer to continue his service after being commissioned as a second lieutenant that June. He served in both the Korean and Vietnam wars before joining the Fifth Air Force in Japan from 1968-1970 as a deputy chief of operations. In July 1970, he was appointed commander of the 16th Operations Squadron in Thailand—a unit focused on providing highly accurate air support in dynamic operations worldwide.

Tucker received several honors during his service, including a Distinguished Flying Cross, awarded for his service with the 5th Air Force; the Bronze Star Medal, awarded for his heroism during ground combat; and the Meritorious Service Medal, in recognition of his non-combatant service.

In 1971, Tucker returned to the University of Miami to command the Army ROTC program. He retired in 1976 as a lieutenant colonel following 30 years of dedicated service within the Army and Air Force. Tucker died on Jan. 10, 2019. He was 95.