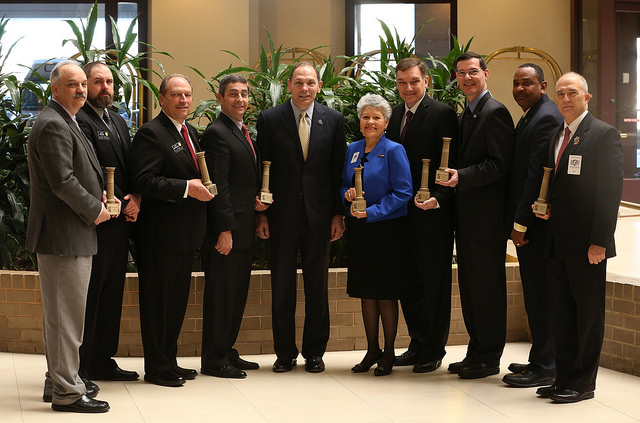 One hundred fifty years ago, during his second inaugural address in 1865, President Abraham Lincoln articulated what would become the nation’s obligation to Veterans: “to care for him who shall have borne the battle and for his widow and his orphan.” Next week marks the 150th anniversary of that promise.

Today, there are more than 21 million Veterans – two-thirds of the 31 million total U.S. population in 1860. Caring for their particular needs, and their dependents’ needs, requires more innovation and collaboration between federal and state governments than even a visionary like Lincoln could have forseen.

On Feb. 24, VA Secretary Bob McDonald announced the recipients of the 2015 Abraham Lincoln Pillars of Excellence Awards at the National Association of State Directors of Veterans Affairs (NASDVA) winter conference in Alexandria, Va.

VA and NASDVA worked together to establish the Pillars of Excellence Awards to identify and formally recognize outstanding state programs that support or exemplify VA’s strategic goals and priorities. Awards were presented for programs in three categories: Elimination of the Disability Claims Backlog, Improving Veteran Access to VA Benefits and Services, and Outstanding State Programs.

The award for Elimination of the Disability Claims Backlog category went to Ohio Department of Veterans Services for its Inter-Agency Paperless DD-214 Project. Since 2011, the Ohio Department of Veterans Services pursued an initiative with the Department of Defense (DOD) to gain access to military personnel records to assist in expediting the VA claims process. The initiative led to a pilot program, which later expanded to six additional states. In 2015, all states will have access to electronic DD-214’s as a result of their efforts.

The award for Improving Veterans Access to VA Benefits and Services went to the Alaska Division of Veterans Affairs for the VA / Alaska Tribal Health Agreement. In the most rural state in the country, with many locations only accessible by plane, boat or snowmobile, the Alaska Office of Veterans Affairs crafted an agreement with Alaska Native Healthcare Programs to dramatically increase access to care for Veterans residing in these areas. Veterans can now access care at all of the tribal health clinics that are part of the Tribal Sharing Agreement – saving Veterans as much as 4 days of travel per medical visit; increasing enrollment of Veterans in Alaska VA Healthcare System by 14 percent in the first year of the agreement, and reducing travel costs by $3.5 million.

The Florida Department of Veterans’ Affairs (FDVA) was also awarded the Improving Veterans Access to VA Benefits and Services Pillars of Excellence award for its outreach and branding campaign “Honoring Those Who Serve U.S.” With more than 1.5 million Veterans, the third largest Veteran population in the nation, FDVA rebranded the 25-year-old state agency to include encouraging “never-before-reached” Veterans (Vietnam Veterans, Women Veterans, and returning Veterans) to access earned benefits and services by raising awareness about FDVA. The Department also redesigned its website, developed an app to locate services, and improved its social media presence.

The first award for Outstanding State Programs went to the Idaho Division of Veterans Services for the Veteran Music & Memory Project. More than 80 percent of people with dementia will eventually display agitated behaviors. Implemented in April 2014, the Veteran Music & Memory Project works with individual professionals and caregivers within Idaho State Veterans Homes; nursing aides; music therapists and nurses, along with family members, to create a powerful personalized music program for each Veteran who chooses to participate. Music decreases symptoms of agitation and offers an enjoyable, fulfilling activity for persons in dialysis, on a vent or bed-bound. It also increases cooperation, engagement and socialization; reduces resistance to care—a real boost for staff morale; reduces agitation and sun downing; and provides a valuable tool for the effort to reduce reliance on anti-psychotic medications. The Idaho State Veterans Home – Boise recently became certified to offer the Music & Memory program in its long-term care facility. Out of more than 16,000 long-term care facilities within the United States, less than 400 have achieved this certification.

The second award for Outstanding State Programs went to the Texas Veterans Commission (TVC) for the creating the Military Veteran Peer Network. The Military Veteran Peer Network (MVPN) is a collaborative program between the Texas Department of State Health Services (DSHS), the Texas Veterans Commission (TVC) and Texas’ Local Mental Health Authorities (LMHAs). DSHS began developing mental health services for Veterans and their families in 2009 using peer-to-peer counseling services. Thirty-five volunteer coordinators have recruited more than 1,000 volunteers and trained 986 in peer support skills, providing statewide coverage by the MVPN. Coordinators and volunteers are charged with identifying any and all mental health resources in their communities that could play a role in meeting a veterans’ need.

The final award for Outstanding State Programs went to South Dakota Department of Veterans Affairs (SDDVA) for Operation Reach All Veterans. SDDVA designated 2014 as the year to reach an estimated 75,000 veterans living in South Dakota. Operation RAV was conceived to identify and contact South Dakota’s Veterans to make them aware of the benefits and services available to them. This effort included manning an Operation RAV booth in the State Capitol during the 38-day legislative session, conducting Open Houses in all 66 counties and a phone campaign. The Department intended to reach Veterans from all eras and their families, and assist with their existing claims or file new claims.

The Abraham Lincoln Pillars of Excellence Awards only showcase a small fraction of the innovations that states implement every day meet to Veterans’ needs. VA will continue to work with states, tribes and territories to ensure Veterans receive the care and benefits they have earned, and live up to its mission – Lincoln’s promise – to care for those “who shall have borne the battle” and for their families and survivors.