Connecting with the community through service 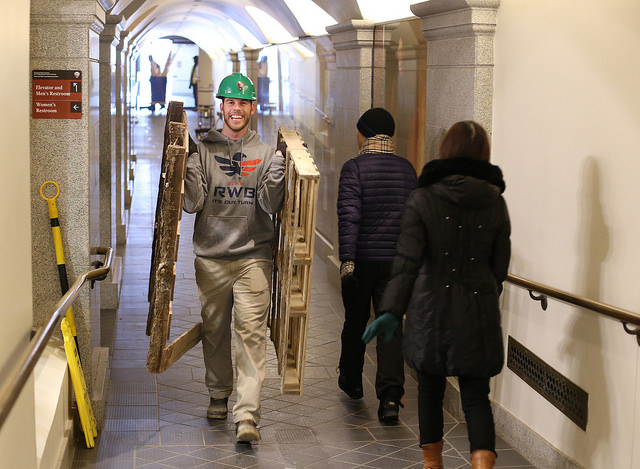 Team RWB members recently gathered at the Thomas Jefferson Memorial to remove clutter and junk that has collected under the iconic monument over the years.

Despite the freezing temperatures and snow, the “Eagles” moved everything from old chairs, signs and rusted pipes from the memorial into two industrial-sized dumpsters for a thankful National Park Service (NPS).

James Pierce, volunteer program coordinator for the National Mall and Memorial Parks, wasn’t surprised a Veterans organization wanted to help; however, he was surprised at what 15 motivated people could accomplish in only two hours.

“They did an amazing job,” he said. “We’ve been trying for 6 months to clean that area out and we did more in two hours worth of work than in all that time thanks to Team RWB,” Pierce said.

While Team RWB is known for bringing Veterans and civilians together with a variety of physical activities like running and rock climbing, the organization also sees community service as a way for its members to find purpose after military service. According to volunteer coordinator Rebecca Foster, helping at a site her chapter runs by on the National Mall at least twice a week is just one of many ways to build authentic connections between members and the community.

“Each chapter may have different service events because its unique members influence each chapter,” she said. “We are fortunate to have so many monuments and amazing national parks here in D.C. … We picked the Jefferson Memorial because NPS needed help and it was important for us to support them, just like they support us in our regular activities.”

While the community service helps them to connect with their community, it also strengthens the bonds between RWB members themselves. Rebecca Cunningham didn’t know anyone when she first moved to the D.C. area from California, but that changed when she became involved with Team RWB. She said volunteering at the Jefferson Memorial this weekend brought her closer to the people who have become her friends.

“I [got] a sense of accomplishment from it,” she said, “and I got a strong sense of belonging and camaraderie from it. “

Want to become more involved in your community? Here is a list of Veteran organizations that can help you: