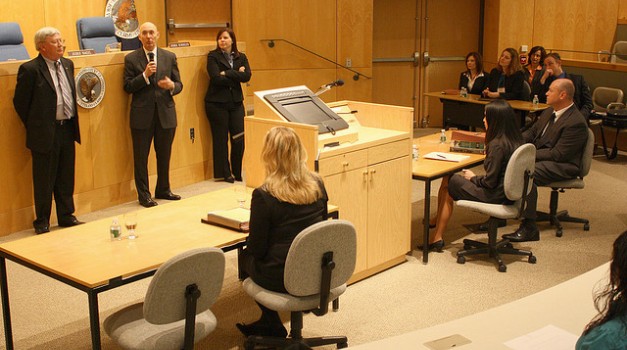 When a Veteran returns home from war, they trade adrenaline-soaked firefights for mall shopping and combat patrols for classrooms. When life screeches to a relative halt, there tends to be a common question among Vets: Now what? The false sense that life will fall perfectly back in place, coupled with the idea of what is supposed to come next and the realization that the rush felt during deployment is gone forever can lead some Vets to go heavy on alcohol and drugs, ultimately catapulting them into a legal system that, until recently, was unable to adequately deal with the unique challenges faced by Vets.

As Kurt Vonnegut wrote in Slaughterhouse-Five, in war, “absolutely everybody gets a little something.” For Iraq and Afghanistan Veterans, unfortunately, that can mean coming home with post-traumatic stress, an increased risk for homelessness, and—in a tiny minority of cases—a temper that can lead to problems. For these reasons, Veterans Treatment Courts became a phenomenon. The idea was brought to life in 2008 in western New York by Judge Robert Russell, who based the idea on making a hybrid court—one that took aspects of popular drug and mental health courts already established across the U.S. By early 2010, there were 24 operational Veterans courts—from Buffalo to Los Angeles with another 40 in development across the United States.

According to Chris Woods, a Veterans Justice Outreach Specialist with the Hunter Holmes McGuire VA Medical Center, most of the arrests he has seen among young Iraq and Afghanistan Vets are for driving under the influence, simple assaults, public intoxication, resisting arrest, and possession of drugs. Woods says the Veterans he works with do not typically have a history of violence or drug use. This makes it even more critical to get those eligible into VA treatment instead of behind bars.

To be eligible for treatment services, Veterans need an honorable discharge and two or more years of active duty service. However, with the ongoing conflicts, the two-year requirement is often waived if the Veteran has been deployed. If a Vet has an other-than-honorable discharge, he or she can file an appeal. For those with a dishonorable discharge, Woods will refer them to a Wounded Warrior program which will work with a Veteran regardless of discharge status.

Sean Clark, the National Coordinator of Veterans Justice Outreach in the Office of Mental Health Services here at VA, believes the success of the treatment courts is due to “connecting Vets with VA services at the earliest possible point.” And the first encounter for the Vet is usually with law enforcement.

The law enforcement personnel who participate in the program are trained to deal with PTSD, crisis intervention, and how to interact with someone who has mental health issues. They also receive information about VA substance and mental health programs. Law enforcement has been trained to remain calm and simply ask if the person they’re encountering is a Veteran.

“Law enforcement is receptive to the training,” said Woods. “A lot of them are Veterans themselves.”

Woods has introduced himself to a handful of courts and jails and personally links up with 40 – 50 courts and 21 jails in 43 counties and eight cities. He educates the courts on what VA services are available and how VA can be used to help the troubled Veteran. While VJO specialists identify appropriate VA services, the court ultimately decides if the program is suitable for the Veteran.

“I have not had a judge or court turn down VA services or resources yet,” said Woods.

Once a Veteran has accepted VJO services the court can pair them with a mentor, usually a Veteran, who provides peer support. The Veteran must also identify and actively pursue personal goals, which include employment and educational opportunities.

If a Veteran has landed in jail, VJO specialists still have an opportunity to reach them prior to their release. Veterans are identified by prison mental health staff and connected with a specialist. However, the biggest challenge Woods sees is that Veterans don’t actually know they are a Veteran and qualify for VA services.

“They don’t see themselves as Veterans,” said Woods. “They automatically think of old people as being Vets. . .not young people.”

Woods estimates he has helped between 50 – 100 Veterans during his year and a half on the job. His time on each case varies from simply writing up a court report to months of dedicated in order to help a Veteran succeed. But the reaction he receives is typically the same: positive and grateful.

Veteran Treatment Courts continue to spread across the country, welcomed by communities for their efforts to help Vets in need. No one who deploys anticipates returning home to life in a jail cell. With the help of Veterans Justice Outreach Specialists and Veteran Treatment Courts, Vets are being given a second chance.

“Someone in crisis doesn’t belong in jail but deserves some help,” said Clark.