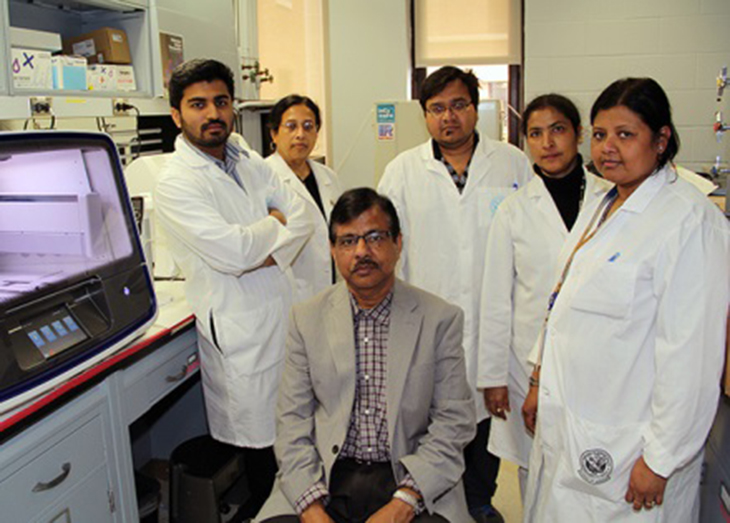 Published this spring in Laboratory Investigation online, the study found that the common household medication works to prevent the initial development of the disease, as well as its relapse following chemotherapy and cancer treatments.

Dr. Sushanta Banerjee, research director of the VAMC’s Cancer Research Unit used both incubated cells and mouse models to test his theory that aspirin could alter the molecular signature in breast cancer cells—enough that they wouldn’t spread.

Twenty mice with aggressive tumors were studied. For 15 days, half the mice were given the human equivalent of 75 milligrams of aspirin per day, which is considered a low dose. Those mice that received aspirin had tumors that were, on average, 47 percent smaller.

To show that aspirin could also prevent cancer, researchers gave an additional group of mice aspirin for 10 days before exposing them to cancer cells. After 15 days, those mice had significantly less cancerous growth than the control group.

Banerjee says the aspirin appears to ensure the environment is not conducive to the reproduction of cancer stem cells.

Stem cells, also called residual cells, are the cells that survive cancer treatments and can reappear when conditions are more favorable for them to again reproduce. “In cancer, when you treat the patient, initially the tumor will hopefully shrink,” says Banerjee. “The problem comes 5 or 10 years down the road when the disease relapses.”

Banerjee says that aspirin appears to remove the ability for self-renewal from these residual cancer cells. “Basically,” he explains, “they couldn’t grow or reproduce.”

Previous studies have shown aspirin to have a similar effect on colon, gastrointestinal, prostate and other cancers.

VA research study findings, such as this one on breast cancer, continue to inform and impact the quality of Veterans’ health care, and ultimately advance medical knowledge in the private sector. And as increasing numbers of women Veterans continue to join and, eventually, leave the military, VA remains prepared to care for those who “shall have borne the battle …”