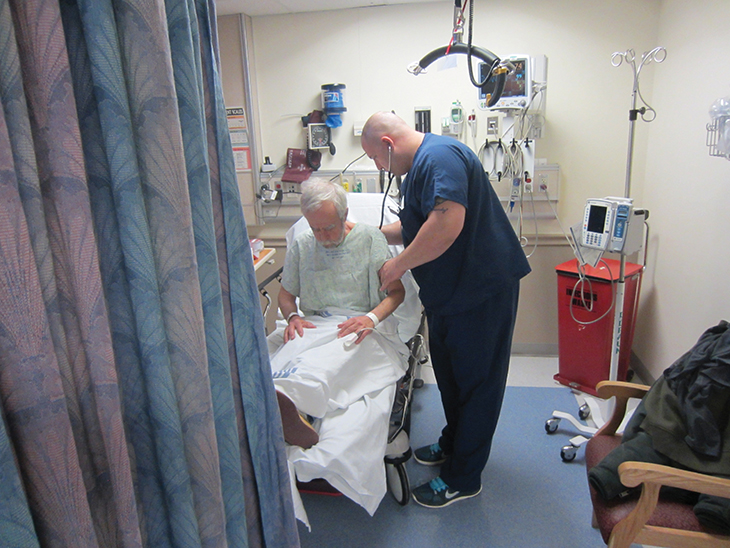 When he got out of the service in 2012 after four combat tours, Joe Carney didn’t have much trouble finding work. However,  the jobs available to him paled in comparison to the life-saving duties he had as an Army medic.

“I was over-qualified for basic health-tech stuff,” said Carney, who today works in the emergency room at the Captain James A. Lovell Federal Health Care Center (FHCC) in North Chicago. “I was told by four or five hospitals I was overqualified.”

At the same time, he didn’t have the credentials for jobs such as physician assistant or nurse practitioner. Carney decided to continue with the sports medicine college classes he began while he was still in the Army, and at the same time pursued getting into a VA program he heard about before he was discharged.

The intermediate care technician (ICT) program was piloted in 2012 in the Veterans Health Administration. The goal is to hire former military members who served as Army medics, Air Force medical technicians, and Navy and Coast Guard hospital corpsmen and help them capitalize on their valuable experience and continue working and progressing in the medical field.

Lovell FHCC Intermediate Care Technician Joe Carney listens to the heart of Veteran in the FHCC emergency room. Carney, a former Army medic, honed his skills on the battlefield and transferred them to his job at the FHCC. He is studying to become a physician assistant. (Photo by Jayna Legg)

A job as an ICT at Lovell FHCC was a good fit for Carney, who received his sports medicine degree in 2014 and continued with more college classes. Today, he is close to completing the prerequisites to enter the physician assistant (PA) program at Rosalind Franklin University Chicago Medical School.

Caring for Veterans, Servicemembers and their families made his transition to civilian life easier, Carney said.

“I’m honored to care for them … I can’t hold them up any higher… and I can identify with them. I know what they are going through.”

Additionally, Carney believes his ICT job at Lovell FHCC has positioned him well to become a PA. “I work with all the doctors and nurses, and there’s a huge emphasis on learning. I learn new things every day,” he said.

Carney has a mentor in the emergency room, Dr. Michael Bellino. “He teaches me a lot,” Carney said. “I almost get treated as a PA now. I get introduced to patients as ‘Here’s Joe, a future PA.’”

Bellino said former corpsmen and medics have the training and experience equivalent to a second-year medical resident, and the ICT program recognizes that fact.

“Former corpsmen and military medics don’t fit in when they get out of the service,” Bellino said. “The outside world doesn’t have a job that keeps up their unique and advanced skills and pays well enough, so they end up stepping down.

“This is a perfect thing to enhance the skill set they gained in combat, or in the service, so they can go into a PA program, or become a doctor,” Bellino said.

In combat, “death was everywhere,” Carney said. “There were lots of firefights, lots of casualties, and we were dealing with significant loss of life.” Carney, himself, was injured, both physically and mentally. “I still struggle with a lot of it. I’m a disabled Vet for a reason.”

A typical day on active duty could find Carney helping to save the lives of Servicemembers injured on the battlefield, as well as providing medical care to local children.

Now, in the FHCC’s emergency room on a typical day, Carney can be found performing any number of tasks, including draining and suturing wounds, starting IVs and inserting catheters, conducting medical exams and doing electrocardiograms.

“He’s an absolutely invaluable member of the staff,” said Dr. Jeffrey Dubnow, head of the Lovell FHCC emergency room. “He’s qualified to do many things, which is a great help to the doctors. We’re very happy with him.”

Carney is the FHCC’s only ICT. Two others who started with the pilot program have moved on to other opportunities. Bellino and Dubnow hope the ICT program, which currently is in transition at the national VA level, will continue and potentially develop into a training program for PAs and/or doctors.

“We need more ICTs,” Bellino said. “There will be a shortage of physicians in the future … We have this pool of qualified Veterans out there … With this program, we have the next providers for the VA system.”

About the author: Jayna Legg has been a public affairs specialist at the Capt. James A. Lovell Federal Health Care Center for three years. She is an Army Gulf War Veteran. She was commissioned a 2nd Lt. from Army ROTC at the University of Illinois, and then served on active duty and in the Illinois Army National Guard and Army Reserve, retiring as a Lt. Col. after 25 years of service. In the Army, she was a signal corps officer, command and general staff college instructor, and public affairs officer. She also is a former newspaper reporter and editor.