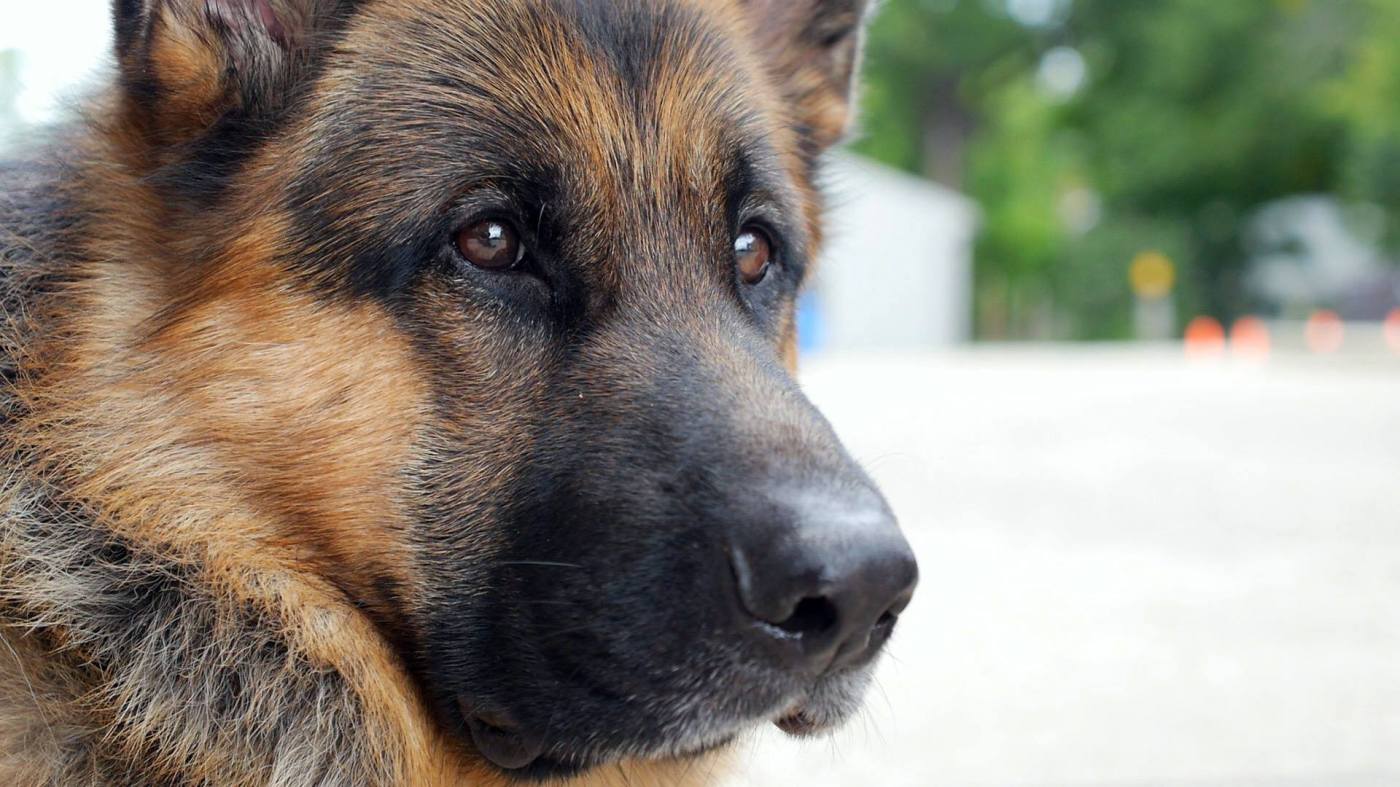 Kenny Bass liked his job. As a 22-year-old Marine participating in the initial invasion of Iraq, life couldn’t have been more exciting.

“I was part of the combined anti-armor platoon,” he explained. “It was the ‘CAAT platoon.’ We were doing a lot of counter-ambush patrols, the insurgents were attacking Red Cross personnel, civilian contractors and other non-combatants. So we were tasked with going out and trying to solicit an attack. We were Infantry Marines, and young, so most of us were pretty excited about doing that kind of work. We had heavy-duty machine guns and anti-tank missiles.”

About four months into his tour, the odds caught up with the young Infantry Marine. The unarmored Humvee he was riding in struck an IED.

When Veteran Kenny Bass was at the Dayton VA, receiving medical attention for a kidney stone, Atlas was there by his side.

“I was sitting in the passenger side rear, and the IED blew up by the right front bumper,” he said. “Nobody got killed, and I just took a couple pieces of shrapnel to my face, nothing major. I think the blast wave injury was the major thing.”

Nevertheless, by the time he returned home from Iraq in early 2004, Bass was a different man.

“My friends noticed a change in me,” he said. “I was depressed. And I was anxious. I remember going to a flea market one time and that’s when I had my first panic attack, because of all the people there. It was like I was still in Iraq, where just about everyone you see is a potential threat. I hated going out to eat or going to the mall or anything like that.”

As if depression, anxiety and panic weren’t enough, another symptom began to surface. Anger.

“I was walking around with an anger level of about seven or eight,” Bass explained. “One time I got pulled over by the California Highway Patrol for doing 104 mph. I got mad at the cop for pulling me over. I was such a jerk. It didn’t take much to tip me off.”

At home, the 33-year-old Veteran’s garage became his haven.

“I’d sit out there all day smoking cigarettes,” he said. “I could see the street from there, which made me feel safe, and I could also hear what was going on in the house. So I had everything covered.”

From Bad to Worse

To dull the anxiety and the fear, the former Marine turned to alcohol.

I started drinking a lot,” he said. “Of course the alcohol just made things worse. I got to the point where I hated to wake up in the morning. I hated my life. I wanted to be healthy again. I wanted to work again and not be on disability.”

In an effort to get his life back, Bass headed over to the Dayton VA Medical Center in 2007. There he began therapy sessions with Bill Wall, a clinical social worker who had served in the military for 30 years.

“Kenny went through our therapy program here at Dayton,” Wall explained, “but it was clear that he was still having some issues with personality changes, hyper-vigilance, anxiety, depression, anger and other symptoms related to post traumatic stress. When he would go out in public, he just didn’t feel safe or in control. I thought maybe a psychiatric service dog might be a good next step for him, so I recommended he look into it.”

Wall, a Veteran of Operation Iraqi Freedom, had good reasons for thinking a service dog might be the game-changer Kenny Bass was desperately in need of.

“You can feel a lot more safe with a dog around you,” the social worker observed. “The dog has been trained to pick up on any fear or anxiety you might be feeling. They can actually smell it. The dog then does something to distract you or make you feel less anxious. When you become overloaded, the dog knows it and helps you refocus. Even before you realize you’re overloaded, the dog will pick up on it. For example, if you’re in a crowd of people and you begin showing subtle signs of distress, your dog will try to create a buffer zone around you. The dog is trying to give you a sense of safety.”

“A psychiatric service dog is…always focused on taking care of you.”

And when the world seems like a safer place, chances are you’re more likely to get out there and participate in it, Wall observed.

Back From the Brink

In 2012, after doing a little research, Kenny Bass was able to get himself paired up with an 18-month-old German Shepard named Atlas, a highly-trained service dog provided by a non-profit called Instinctive Guardians.

Kenny Bass and his dog Atlas.

“Atlas became my support system,” Bass said. “He could tell when I was having nightmares. He’d jump on the bed, lick my face and wake me up. A few weeks after I got him I was sitting alone in my garage, as usual. He came over and dropped his ball in my lap. Five minutes later I was out in the backyard with him, in the sunshine, throwing the ball for him.

“If you’re a Veteran, and suicidal, a little thing like that can be lifesaving,” Bass continued. “Atlas definitely brought me back from the brink. He’s such a character now. He gets me laughing.”

Aside from being a natural comedian, Atlas also serves as a competent body guard.

“When we’re out, I can trust Atlas to be vigilant for me,” Bass said. “I’m experiencing more things now because of him. When we’re somewhere crowded, he’ll block for me. He’ll walk back and forth behind me to keep people from getting too close.

“And when I tell him to ‘post,’ he sits down on my right side, facing the other way. If somebody approaches me from behind, he’ll nudge me. He’s alerting me. It’s a good feeling knowing he’s watching and that I don’t have to.”

Having turned his life around two years ago with the help of Atlas, Bass decided it was time to start giving back. In 2013 he helped found The Battle Buddy Foundation, a non-profit that trains service dogs for Veterans struggling with post-traumatic stress.

“When you’re in combat, you don’t go anywhere without a buddy, someone to watch your back,” Bass said. “That’s where the term ‘Battle Buddy’ comes from.”

He added: “It’s a good feeling to know someone always has your back.”