Home / Honoring Vets, Top Stories / Meet the Veterans invited to the State of the Union

Meet the Veterans invited to the State of the Union 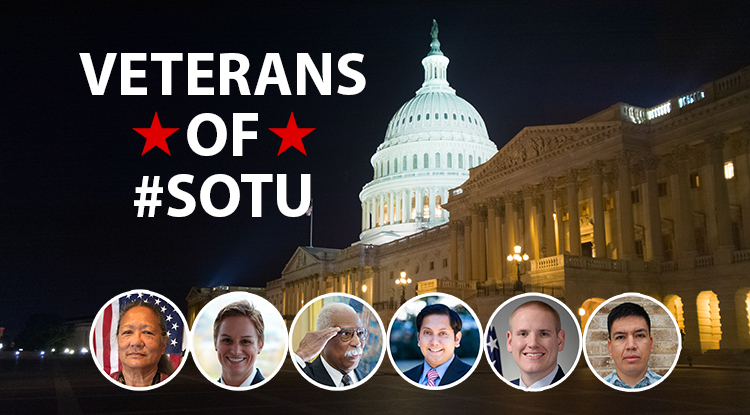 Six individuals who have served the United States will be honored at President Obama’s final State of the Union address tonight as guests of the White House.  The Vantage Point team met two of them this week.

Naveed Shah met with VA Secretary Bob McDonald on Jan. 11, 2016. Shah, an advocate with Iraq and Afghanistan Veterans of America, will attend the 2016 State of the Union address. (Photo by Robert Turtil/U.S. Department of Veterans Affairs.)

Naveed Shah’s story of service is similar to most Post 9/11 Veterans. He was 13 on September 11, 2001, and living in Northern Virginia. Some of his friend’s parents worked at the Pentagon and he remembered the fear they had during the attacks.

“Their fear stuck with me and made me feel like joining the Army was something that would allow me to give back to a country that has given me so many opportunities,” Shah said.

It was that same year that Shah learned he could never be president because he was born in Saudi Arabia.

“I asked my parents and they told me, I did not know that. Never occurred to me that I was anything other than an American,” he said.

Shah enlisted in the U.S. Army in 2006 and  was assigned to 1st Brigade, 2nd Infantry as a public affairs specialist. He later deployed to Iraq in 2009 with the 13th Sustainment Command out of Fort Hood, Texas. Operating out of Joint Base Balad, Shah traveled the country and remembers seeing how the country was shaping, especially on Iraq’s Election Day.

“I remember we were pulling security and there were reports of violence all over, but the lines were still full. That made me never want to take voting for granted again,” Shah said.

Shah left active duty in 2010 and had a rough time transitioning. Like many Veterans leaving the service, the immediate void of purpose and direction can take its toll. Ultimately Shah joined the U.S. Army Reserve and only recently finished his commitment in 2015.

“I came to the realization that there is an entire community of Veterans and supporters who want to help,” he said.

Shah vowed to always be part of the solution. He became active with Iraq and Afghanistan Veterans in America and helps to organize Veteran-civilian partnerships in his community.

He’s now a real estate agent and has used the Post 9/11 GI Bill for a degree in finance, which he is still pursuing.

So what was it like being invited to the State of the Union? “I didn’t believe it,” he said. “I was floored.”

This will not be the first time he’s been a guest of the president though. He’s been to the White House twice. This past Veterans Day, he  “had a brief conversation with the President and Vice President, I thanked them for their service, which was kind of funny.”

While Shah doesn’t know what kind of role he is playing in the president’s address, he is hoping to use the opportunity to share a message with his fellow Veterans.

“You are never more than a phone call or a Google search to get the help you need.”

Earl Smith is a U.S. Army Vietnam Veteran who gave then-Senator Obama a 101st Airborne patch he had carried for 40 years. Smith met with VA Sec. Bob McDonald before attending the State of the Union address as the president’s guest. (Photo by Robert Turtil/U.S. Department of Veterans Affairs)

“Beyond excited! Overjoyed! I felt like a new born baby, I was so happy!”

That is how Earl Smith described his feeling when the White House informed him he would be the president’s guest at the 2016 State of the Union.

“It means the world to me,” Smith said.

“It took me 30 years to get to the Vietnam Wall, and I think it is because I wasn’t ready, but [attending the State of the Union] is just a validation for me that we are not forgotten, that the men and women who gave their all are not forgotten.”

Smith, the former director of security for the Hyatt Regency in Austin, Texas, found himself in an elevator with then-Senator Barack Obama on an early February morning in 2008. He could tell Obama was tired, but he spoke up anyway. “Senator Obama, I have something I want to give you,” Smith said.  “I’ve carried this military patch with me every day for 40 years, and I want you to carry it.”

Smith recalls Obama’s initial refusal, as anyone who is offered a gift by a stranger would, but Obama accepted and carried the iconic U.S. Army 101st Airborne patch in his pocket for the remainder of the campaign.

Smith was only assigned to the 101st a short time. He spent most of his Army career with the 173rd Airborne Brigade and told Vantage Point he is a proud Sky Soldier.

The patch he gave then-Senator Obama was part of pair he held dear, saying, “I could look at those patches and remember that we are America, and this is what we are about. We are about service and sacrifice, and that we are all in this together.”

Unfortunately, during a move his 173rd patch was lost, along with his dog tags. The day he met the Senator, he had the Screaming Eagles patch with him.

Smith was unaware of how important the patch would become to the future president. It will be archived in the Obama Library, a testament to the people who ushered Obama into the presidency and a fitting tribute to a humble Veteran and his wife of 35 years.

Smith visited with VA Secretary Bob McDonald a few hours before the State of the Union address, where they talked about their military careers, both of them paratroopers, and bantered back and forth with the good-natured ribbing of rival combat brigades.

“No one told me I was going to be jumping out of perfectly good airplanes,” Smith said to McDonald. To which McDonald replied “Or what it would do to our knees!”

As Smith was leaving the Secretary’s office, he thanked everyone for meeting and joked about waving to people from the balcony during the State of the Union.

“I am overjoyed being here,” Smith exclaimed. “Seeing this, seeing everyone and how important their mission is to them, it is just overwhelming.”

“I could not be prouder than I am right now, surrounded by great Americans.”

Also attending the State of the Union address are Veterans Cynthia Dias and Oscar Vasquez and Servicemembers Spencer Stone and Lisa Jaster.

In the offices of Veterans Village, Cynthia Dias, left, who was a Navy corpsman in Vietnam, shares a laugh with 83-year-old Violet Young, who was in the Women‘s Army Corps during the Korean War. (File photo by Michael Quine/Las Vegas Review-Journal)

A Navy Veteran who served during the Vietnam War as a nurse, Cynthia Dias now lives and works as a volunteer at Veterans Village, a non-profit group in Las Vegas working with homeless Veterans.

Dias ended up in Las Vegas at the invitation of her niece, she told the Las Vegas Review Journal. “[But] it didn’t work out and I ended up back on the street because of PTSD issues,” she said. Dias was then diagnosed with PTSD by Las Vegas’ VA Medical Center mental health professionals.

Now, she uses her experience to help homeless Veterans make the transition from life on the street to a more stable life and employment.

Oscar Vasquez came to the United States when he was 12 years old. After attending high school and college in Arizona, he returned to Mexico to apply for a visa and was granted a green card in 2010. Six months later, to show his thanks to his new country, Vaquez enlisted in the U.S. Army. He served until 2014, including a tour in Afghanistan.

An advocate for science-technology-engineering-mathematics — or STEM — education for under-served youth, Vasquez now works as a business analyst in a web development team. “It’s hard to describe what it means to have the ability to influence people to better their lives, but if I can just convince another kid to pursue education, to stay in school and stay out of trouble, what more can I ask for, right?,” Vazquez told his local television station.

Maj. Lisa Jaster participates in the Darby Queen obstacle course as part of their training at the Ranger Course on Fort Benning, Ga., June 28, 2015. Soldiers attend the Ranger Course to learn additional leadership and small unit technical and tactical skills in a physically and mentally demanding, combat simulated environment. In 2015, she became the third woman to earn the Ranger Tab. (U.S. Army photo by Staff Sgt. Scott Brooks/ Released)

Major Lisa Jaster is the first female Army Reserve officer to complete and graduate from Ranger School. She was one of 19 women who attempted the course last April and one of three to graduate.

“I want my presence [at the State of the Union] to symbolize the fact that there are competent people out there, and as long as the standards don’t change, the best person for each job needs to be placed in that job,” she told the Washington Post.

Spencer Stone, the Airman who helped foil a terrorist attack on a train in France, Aug. 21, 1015, arrives at Travis Air Force Base, Calif., Sept. 3, 2015. Stone was promoted to Staff Sergeant following the incident. (USAF Photo by T.C. Perkins Jr.)

Staff Sergeant Spencer Stone is a medical technician at the 60th Medical Operations Squadron at Travis Air Force Base in California. But it was his actions to thwart a terrorist attack on a train en route to Paris earned him a Purple Heart, an Airman’s Medal and a two-rank promotion.

Stone told the New York Times that after four years in the Air Force, “he plans to go to college, major in international relations and perhaps go into law enforcement.”