Women Veterans honored at the Capitol 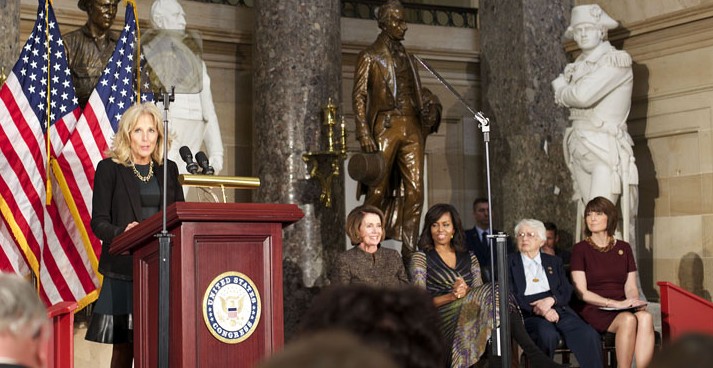 Women Veterans gathered in Statutory Hall at the U.S. Capitol this week to be honored for their service by some of the most influential women in Washington. On March 2, House Minority Leader Nancy Pelosi hosted her annual Women’s History Month reception at the Capitol, which included remarks by first lady Michelle Obama, Dr. Jill Biden, House Republican Conference Chair Cathy McMorris Rodgers, and retired Air Force Brig. Gen. Wilma Vaught.

Vaught was one of the first female generals in the Air Force and the first woman promoted to brigadier general from the comptroller career field. She served as chairperson of the NATO Women in the Allied Forces Committee and was the senior military representative to the Defense Advisory Committee on Women in the Services. She also served as president of the Women in Military Service for America Memorial Foundation. As she rose through the ranks, she recalled the challenges that women Veterans faced.

In 1957, there was only one colonel position that she could compete for: the director of Women in the Air Force. At that time, women were restricted to make up only two percent of the military workforce, and the law prohibited women from becoming generals and admirals. Women did not receive the same benefits as their male counterparts, were forced to leave the service if they became pregnant, were not allowed into the Reserve Officers’ Training Corps or the military academies. Over time, women spoke out against their discrimination, which led to action being taken and progress being made.

“In 1985 I retired as a brigadier general, and I remember it well. There were seven women generals or admirals, and I was the ranking one, a brigadier general. And when I think about today, we have three four star women, two in the Army, generals, and one in the Navy as a four star. We have come a long way,” said Vaught.

Today, there are nearly three million women serving in the armed forces and make up 20 percent of the military workforce. Women are one of the fastest growing segments of the Veteran population.

“Thanks to brilliant, fearless women like General Vaught, today, more than 200,000 women are serving our country in just about every role and rank.  They’re flying fighter jets, training new recruits; they’re graduating Army Ranger School — and I met those graduates.  They are awesome.  Fierce! And as you’ve already heard, they will soon be welcome in every combat unit in our armed forces,” first lady Michelle Obama told the crowd. She added that while there is much progress to celebrate, women in uniform “still face plenty of challenges as they serve this country and then transition back to civilian life.”

Shockingly, many women don’t self-identify as Veterans and may be missing out on the benefits they have earned. Far fewer women use VA Healthcare and services, like the GI Bill, largely because they don’t know it’s available. VA offers women Veterans primary care, cancer screenings and maternity care coverage.

At the close of the ceremony, the first lady called on women Veterans to share their stories so that future generations of women, their daughters and granddaughters, will know that the women who served this country and have worn the uniform have also guaranteed their freedom.