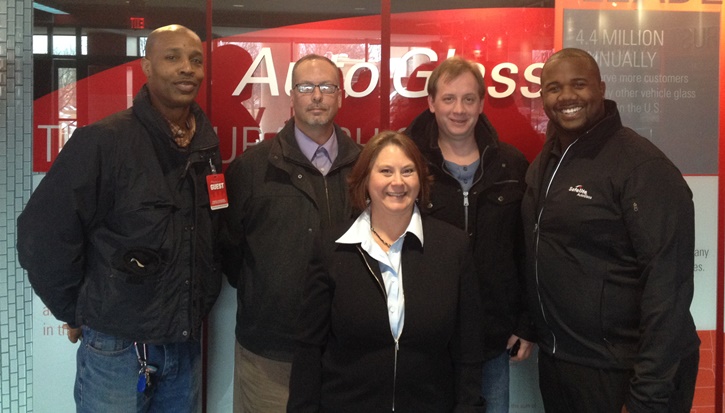 Justin Gallaher, a VA Community Employment Coordinator (CEC) in Columbus, Ohio, knows that employment is critical to helping Veterans exit homelessness. At the same time, being homeless makes it challenging for Veterans to search for a job, secure a sit-down with an employer and practice interviewing skills. In 2015, Gallaher realized that he needed a more effective way to quickly connect homeless Veterans with prospective employers to help those Veterans become and remain stably housed.

Along with his team, Gallaher—one of roughly 150 CECs working at VA medical centers (VAMCs) nationwide to help homeless Veterans secure gainful employment—looked at how his housing-focused counterparts used a “caravan” model to introduce several Veterans to multiple landlords in one day.

Gallaher saw how this approach vastly improved each Veteran’s chances of finding housing. Could it work for employment, too? He decided to give it a try.

The Columbus homeless program team analyzed its caseload and assigned Veterans to groups by skillset and job category. Then, Gallaher set out to find employers with vacancies in those categories who would be open to holding what he referred to as “mass interviewing” events for Veterans who were homeless or at risk of homelessness.

“To be successful, we needed to build strong relationships with employers that had the right types of job openings in accessible locations,” Gallaher said. “I made calls, attended networking events, scoured social media, got referrals from recruiters and worked with local military organizations and my VA colleagues to identify employers and sell them on the concept.”

The mass interviewing program officially kicked off with an event at the Boar’s Head distribution center in Groveport, Ohio, on October 26, 2015. Before each event, the CEC help Veterans submit applications for employment and improve their interviewing skills. Given that the lack of transportation can be a barrier to getting a job in the first place, the team coordinates transportation to the interview for the entire group. This has the added benefit of giving interviewees time to help each other prepare and offer encouragement.

Each employer’s interview process varies. Most provide a group tour, followed by one-on-one interviews; others hold group-panel interviews. Regardless of format, the Veterans receive immediate feedback from interviewers to understand what they did well and what they can improve on, boosting their chances for success in securing employment, even if they don’t get that particular job.

After the event, the VA team follows up with Veterans individually and as a group to review the overall process and adjust, if necessary, the planning of subsequent events.

“This is still a very new model for us, but we’ve developed strong practices and we learn something new from each event,” Gallaher said.

Late last year, the homeless program team also began hosting job fairs and hiring events at the Columbus VAMC, where employers can disseminate information and interview Veterans who have applied in advance or that day. Gallaher uses these opportunities to strengthen relationships with employers and discuss the concept of mass interviewing with them.

The Columbus VA homeless program staff’s shift in strategy has yielded impressive results. To date, 28 Veterans have been hired after mass interviews. The events generated second interviews 91 percent of the time and an employment rate of 80 percent. Since mass interviewing was implemented, the employment rates for Columbus’s Grant and Per Diem and Department of Housing and Urban Development-VA Supportive Housing programs have both risen significantly, to approximately 53 and 50 percent, respectively. The Columbus VAMC’s overall homeless program employment rates have more than doubled, from 22 to 45 percent during the same period.

The on-site job fairs are making an impact, too—five events to date have brought more than 17 companies to the Columbus VA. More than 100 Veterans have attended, and several received on-the-spot job offers.

The Columbus homeless program team is looking forward to continued success and has plenty in the works for March 2016: a mass-interviewing event with Safelite, an exclusive job fair with Central Ohio Transit Authority, and a broader job fair that is expected to bring in 26 employers with jobs paying in a range of $10 to over $20 per hour.

“These tactics could help Veterans in other locations find great jobs, too,” Gallaher said. “You just need to build employer relationships, raise awareness about the unique skills that each Veteran offers and convince everyone that mass interviewing is worth a try.”

Learn more about VA’s Homeless Veterans Community Employment Services and find your local CEC here. If you encounter Veterans who are homeless or at imminent risk of becoming homeless, encourage them to call or visit their local VA Medical Center, where VA staff are ready to assist. Veterans and their families can also access VA services by calling 1-877-4AID-VET (1-877-424-3838).

Carl Landry is the the community outreach coordinator for the Columbus VA.  He has served as the Community Outreach Division coordinator since 2013 and has more than 13 years of leadership experience in program development and implementation.  Carl is a graduate of Tulane’s School of Social Work and has specialized in homeless policy and practice.