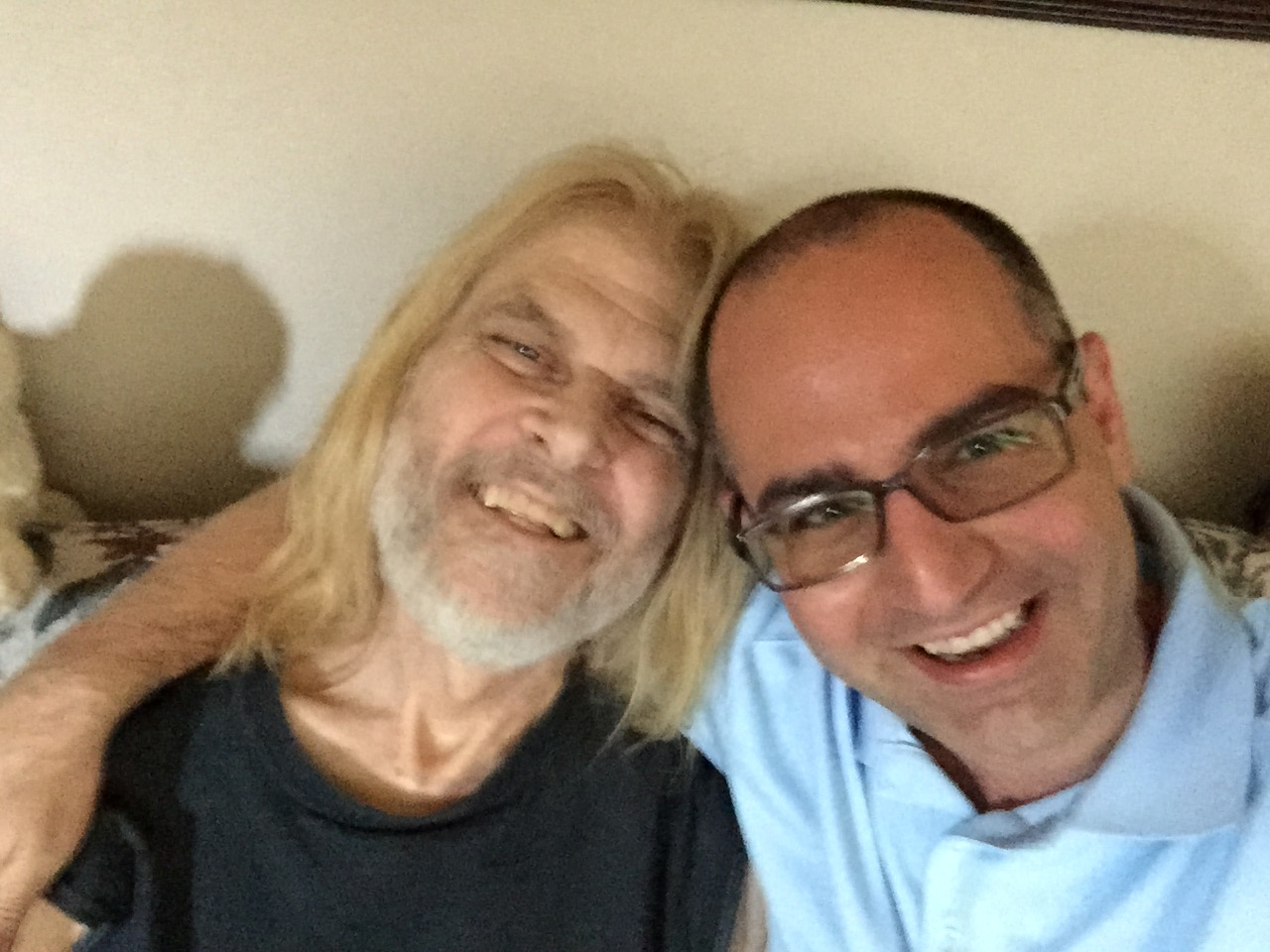 “Dino, you’re my best friend. I love you. It’s time for me to die now.” Five days later, Mark Danforth succumbed to his six-month fight with cancer.

It was an unexpected and unplanned journey that Milwaukee VA employee Dean “Dino” Mantzavrakos took with an unlikely friend who seemed to be a polar opposite. Danforth was a quiet, 6-foot-9, truck-driving, heavy metal rocker with long shaggy hair — “like a blond Jesus,” Dino said.

Dino, a medical records administration specialist, is a smaller, balding man who loves the spotlight. And for more than 400 hours between June and November 2015, Mantzavrakos visited with his friend, did his laundry, cleaned his house, paid his bills and watched him die.

Mantzavrako was honored recently at the Milwaukee VA with the President’s Volunteer Service Award for providing end-of-life care for his friend when no one else would. The President’s Volunteer Service Award is given to Americans nationwide on behalf of the White House, to recognize and encourage those who live a life of service and help change the world.

But this was one spotlight the normally gregarious Mantzavrakos would prefer shine elsewhere. “The thing you really have to get is this was a very independent man who took care of everything. He was strong mentally and physically and didn’t have to rely on anyone for anything.

“When I was told I was considered for this award, I said, ‘Thank you, but no.’ This was very personal and I don’t consider it volunteer work. It was just something I had to do on my own time.’”

Dino and his husband, Gregory, first met Danforth in June 2012 while moving boxes into their new home. He came out into our driveway and introduced himself and within minutes of knowing him, he said, ‘If anyone screws with you guys, I’ll blow their head off.’ Then he drew a smiley face in the dust in our garage.

Wanted us to know we were OK

“That was just the way he was. He wanted us to know we were accepted by him and we were OK. He was a truck driver in a macho industry, but he just wanted to let us know in a socially awkward way that we were OK.”

The brief exchange became a neighborly friendship. “Here’s the thing,” said Dino. “Every time you meet a new person, you come out. You don’t come out just the first time. It’s every time you meet a new person, and whether you’re talking about your spouse or past relationships. Whenever you have to add a gender, you have to come out as a gay. You might get acceptance or you might not. You never know what you’re going to get.

“And here was this macho, straight guy, the heavy metal, rocker dude who loves guns and always dressed in black. He had a big, black truck that could swallow both our cars whole. But we all got along. We’d say ‘Hello’ when we were mowing our grass, or have barbecues.”

Danforth lived with and took care of his elderly aunt and uncle. But when they passed, the house was sold and money shared with the cousins. He used the same realtor as Dino and moved to a ranch home a couple miles away. They kept in touch here and there until Dino got an ominous text from his realtor friend, Jo Ann: “Our buddy Mark is not doing well, he’s got Stage 4 cancer,” she wrote.

Mark didn’t want chemo. He had cancer twice before, and knew this was it.

“And then it just became an everyday thing after work. We both really love cool cars, and even though I’m not a huge sports fan, I’d watch games with him. He loved the Brewers and really liked the Bulls. He liked the Raiders, Packers and the Bears. We’d talk about women and sports and relationships,” Dino recalled.

Talked about what life means

“A lot of times we talked about just what life means. He wanted to know if it meant anything. And I would respond, ‘Does the time here mean something to you? Because it means something to me.’”

Dino said there were times the daily visits were exhausting, but he knew it was important to his friend. “Here’s something caregivers don’t talk about,” he said. “There were days I was just tired, but my fear was there would be nobody to help him. I’d shop, clean and do everything.”

Slowly, Mark began to slip away. “The nurse said he would only perk up when he heard my name. He was pretty much incoherent by then.”

Finally, Mark opened his eyes and grabbed Dino’s hand. “Dino, you’re my best friend. I love you. It’s time for me to die now,” he said. “I know,” Dino replied. “You just let go, my friend. You are home now. It’s OK.”

Mark slipped into a coma and lived five more days.

Did not want the recognition

Will Johnson, the Equal Employment Opportunity program manager who oversees the President’s Volunteer Service Award each year, said because Dino didn’t want to be recognized is why he deserved it. “We had to convince Dino to talk about this. It was a very personal journey for him. Anyone who knows Dino knows he’s a nice guy, but the compassion he gave went so far beyond what people ordinarily do. I told him his story would empower others to step in.”

And that is why Dino ultimately was OK with the honor. “I never shy away from the spotlight. I am the center of attention and want all eyes on me. It’s the theater in me. But this thing I did was not about me. So, in a way, this was so uncomfortable getting the credit.

“But what I learned, and what I tell others, is this shows how important it is to have someone advocating for you who can help make decisions so you aren’t at the mercy of an institution.”

“I’m coming to accept that maybe if someone in their life needs help, even if it’s not end-of-life, don’t be afraid to offer that help. You might be the only kind person someone has.”