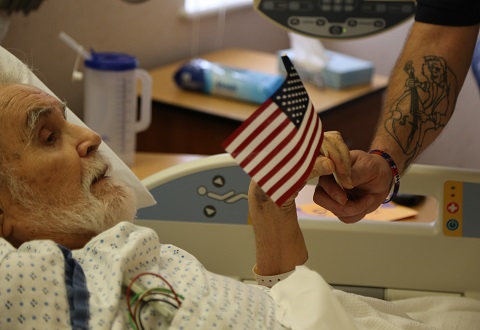 A small gesture can go a long way.

Because gratitude is so important, it stands out when we devote time and mental energy to crafting our thank-you messages. And even though we all know that saying thank you is meant to make one another feel good, it isn’t always that way with Veterans.

For recently returning Veterans who are still in transition, receiving a “thank you for your service” may not always be simple.  Sometimes the Veteran just isn’t familiar with the simple “thank you” just yet, or maybe they are apprehensive about the gesture because they may think that it may be followed up by more questions about combat experience.

Sometimes the response may be awkward, silent, overly appreciated, or simply received with the same “thank you” in return.  Knowing what to say or not to say is important for welcoming home our warriors in transition.

We asked a few OIF/OEF Veterans at the Marion VA Medical Center on how they feel about being thanked for their service.  We discovered some common themes and developed a list of alternatives to saying “thank you for your service” to our returning Veterans.

“When somebody knows that I’m a Veteran and they say thank you for your service I feel honored and know that they appreciate what myself and other Veterans who fought to keep their freedom established.”

“It sometimes throws me off when someone says that to me. Partially because of the environment I work in and all my patients are Vets and older than me …  It’s not till I’m participating in an event for Veterans that I stop and think of it in the ‘first person’ so to speak. The question itself doesn’t bother me, it’s nice that people still say the statement, but I often wonder if people grasp the meaning of the statement.  In response, I normally just say ‘Thank you.’  When someone says thank you for your service are they saying it because they think it’s the right thing to do or is it heartfelt?”

“It’s nice to hear, but can also feel awkward.  I actually had one lady follow me for like five miles until I pulled over into a gas station just so she could say thank you for your service and tried to pay for my gas.  It was nice to feel appreciated, but awkward as hell.  Now, I just say ‘thank you for the support’ and go about my day, it’s just a part of life now.  It’s nice when you’re out and someone buys you a beer, but only when it’s a family member of a Servicemember either deployed or killed, and I always ask to know more about their loved one.”

“I know a lot of Veterans that say it bothers them. For me I just respond with “Anytime.’  I am not offended. I would rather get the appreciation than the manner in which soldiers like my uncles got returning from Vietnam. It doesn’t bother me at all.”

“For a while it used to bother me. I’ve never been one to accept pats on the back well. It was like: you don’t have to thank me. I wanted to do it and I was happy to do it. Now I just say ‘welcome’ and ‘thanks for your appreciating all Servicemembers. But at first, it was hard for me to accept the fact that random strangers wanted to thank me.”

“It gives me a sense of pride that I did something that the average citizen is thanking me for. At first it was strange, but I got used to it. And no, I don’t accept any gifts of any kind. To me I was just doing my job.”

“It makes me a little uncomfortable.  Since I spent my whole enlistment in Okinawa, I never deployed to a combat zone, so sometimes I feel like I don’t deserve it, at least as much as combat Vets do.  A lot of the time, though, it’s more of, I didn’t enlist for the recognition. I don’t think I really did anything extraordinary, just something necessary.”

“Typically when people thank me for my service, I thank them for thanking. Most people wouldn’t understand what it was like to be in though. They don’t know what we went through or how mundane a lot of life was. A Veteran thanking another Veteran is different than civilians for me because it really is an automatic reaction these days – people feel obligated to thank us for stuff they have no clue about because it’s socially accepted. What they’re failing to understand is that each and every one of us did our service for our own reason. So when someone thanks me, they’re not really asking the important question of ‘How was service, and how do you feel about completing it?'”

“When I first got home, I just didn’t really know how to respond other than maybe say, ‘thank you’ or ‘thank you for your support.’  I didn’t think I felt like I really made a difference.  It was just still kind of sinking in that you just deployed, and you know you volunteered, so a part of me just didn’t know how to respond. Now that I have been home for ten years, people still thank me and I say “you’re welcome” or thank them for their support.”

Alternatives to saying “thank you”

Combined, the thanks we give and receive improve our mental health and relationships.  If you do not feel that simply saying “thank you for your service” is enough, or you want to explore different gestures, there are a few other ways to show your appreciation for our Veterans.  Below are a few alternatives to getting to know the Veterans in your community:

If you would like to carry on a conversation with a Veteran after thanking them, but aren’t familiar with what is okay to ask, you can try some of the following questions to get to know the Veteran better:

And of course, there are DO NOTs when asking a Veteran about their service:

Do not ask if they’ve hurt anyone.  Should the Veteran be a combat Vet who is either unwilling to share or plainly states what they went through, be supportive without being intrusive. Sometimes you don’t have to say anything, just listen and give them your full attention.

Ultimately though, building a relationship with that Veteran is definitely the most effective way of saying “thank you”.  So next time you are out in the community and see a Veteran, get to know them by making small conversation with them – ease your way into a “thank you for your service.”

Williams Martinez is an OIF combat Veteran (USMC Infantry) who receives his care at VA, is the father of a beautiful little girl named Maria Belle and is a Veteran advocate in the community not only as a VA employee, but as an athletic director for Team RWB.