It’s “game on” for our Veterans at the Invictus Games 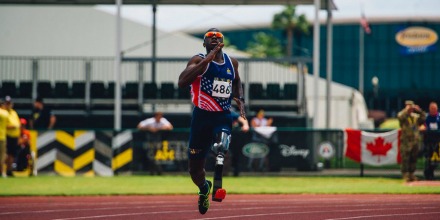 The Rio Olympics are only months away, but some of the most driven and tenacious athletes are wrapping up their own competition on the international stage right now at the Invictus Games.

The Games – held in Orlando, Florida, from May 8-12 – are a multisport event for wounded, injured and sick Servicemen and women, both serving and Veterans. “The Games harness the power of sport to inspire recovery, support rehabilitation, and generate a wider understanding and respect for those who serve their countries.”

This event holds special significance for me, because here at VA we treat Veterans who are recovering from many of the same injuries as these athletes. The professionals at VHA – physicians, nurses, physical therapists and more – are doing fantastic work at our hospitals and clinics throughout the country and at our overseas facilities. In fact, the characteristics common to all Invictus Games athletes – strength, fortitude, determination – are the qualities VHA looks for when recruiting new team members.

If you’re driven to have a challenging, fulfilling career, I encourage you to consider an opportunity with VHA. We have more positions in more locations than any other health care system in the U.S. With exceptional benefits and competitive salaries, you’ll enjoy a high quality of life while helping those who have worked tirelessly to defend our Nation. Find out more and Join VA.

Invictus Games: 5 things to knowThe Invictus Games were established by England’s Prince Harry, who was inspired by seeing the Warrior Games during a trip to the U.S. in 2013.