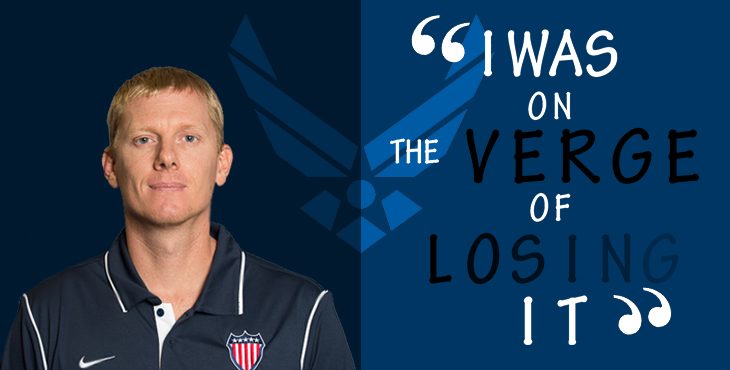 Mortars began to land near Matthew Burke’s location in Afghanistan on Sept. 10, 2011. The base had prepared for a Sept. 11 “anniversary attack,” but the offensive came a day early.

During the attack, Burke set out to find a missing Airman. While searching, he hit his helmet on a cement lip while entering a bunker, causing an injury to his neck and spine. He fortunately found the person he was looking for, but had suffered a physical injury in the process.

A couple days later, he began to experience symptoms of chest pains, difficulty breathing, a rapid heart rate, and trouble sleeping. Even when he managed to sleep, he saw images of conflict. His wounds appeared to be more than just physical.

The reality of what he experienced hadn’t truly set in. So, when he was facing his anxiety, Burke was unsure what to make of it. “I didn’t understand what was happening,” he said.

Burke didn’t report his condition right away. He was afraid of having his reputation ruined. He was in line for a promotion to Master Sergeant and didn’t want to risk losing it. Using discretion, he visited the base clinic, but saw that the medical staff was very busy handling injuries coming from outside the wire. He didn’t want to become a burden on them. “I just embraced the suck,” he said, deciding to deal with it himself.

Six to eight months after he returned from deployment, he was having issues. He felt emotionally imprisoned. He started to have hostile feelings toward poor leadership. Not wanting to become a hazard to himself or those around him, he sought help. Burke worked with a few different doctors, one that even challenged the legitimacy of his mental health issues. “I was on the verge of losing it,” Burke said.

Finally, a nurse case manager helped Burke navigate the medical system and guided him to the care that he needed. “Once I really raised the flag and said, ‘I’m about to hurt somebody,’ they finally stepped up,” Burke said.

The psychologists Burke worked with recommended that he be open about his experiences. “We were taught that we should talk about with our family,” he said. “So, I did, but it was opposite of the effects that I wanted.” He began seeing the residual effects of post traumatic stress disorder (PTSD) at home. His wife began to act irrational and less understanding. His children didn’t understand what he was trying to tell them. His behavior, in a way, became their behavior.

Burke contacted the family support center and talked with a child psychologist. He was disappointed in the response to his children’s situation. He needed to do more for himself and for his family. That’s when he put himself in the Evaluation and Brief Treatment of PTSD Unit inpatient program at the Southern Arizona VA Health Care System in Tucson, Arizona. The 30-day course was meant to help him transition while he coped with PTSD. The course included a number of treatments including yoga, exposure therapy, talk therapy, putting names to feelings, and other approaches to healing. On day 30, Matthew did an exercise requiring him to look into a mirror and describe what he saw and how he felt.

That’s when he finally broke.

He graduated from the inpatient program and went home. Following his moment of frailty, Burke was healing, but facing a new challenges. He had trouble with patience, decision-making, and risk assessment. Even so, Burke recognizes he his finally capable of coping with his trauma and managing the effects.

Now, he uses horticultural therapy and his work through his faith-based non-profit 10-CAN to foster his mental health. Both have established a new sense of purpose, which the veteran community has learned is crucial among post-military Veterans in their recovery. Burke also received many unique opportunities including the ability to compete in the 2014 Invictus Games.

“There’s so many positive things that have happened to me since that one negative thing that’s happened to me, that the only way that I end up worse than I started is by my own demise.”