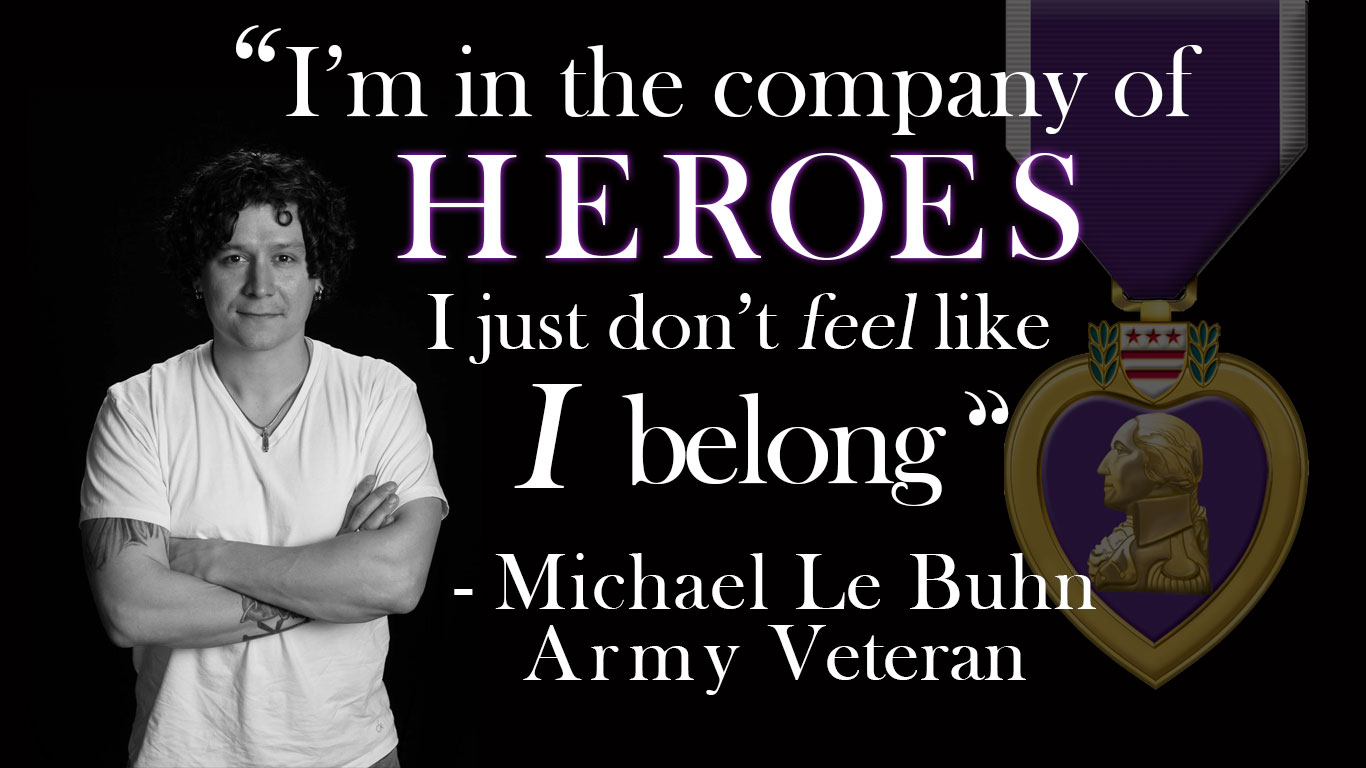 Michael Le Buhn has learned to laugh at his injury. It’s not because he finds it funny, but so he can continue to embrace it.

Le Buhn was on a deployment to Iraq in 2007. His base was attacked nightly and the troops there ran into trouble on nearly every patrol. “Being there means you are always in danger,” he said.

He’s the only one of his friends that joined the military. Ask them, and they’ll say he did amazing things. To Le Buhn, it was ordinary. His job was finance. He was hardly the tip of the spear, but he was there doing his part of the mission.

One day, a local national working on base had drawn a map of the compound and passed it on to the enemy. That night, the base took heavier, more directed fire – hitting the chapel, the gym, the transportation office, and then the living quarters.

He was alone in his room enjoying a new couch he acquired when the rounds began raining down. The blast knocked him back and damaged his inner ear. He couldn’t get it to stop bleeding.

“It happens all at once,” Le Buhn said. “It stretches, as if every second is a life time, but in an instant, it’s over.”

When he saw medical the next day, they talked to him about the damage that had been done and how to care for it.Ultimately, suffered a concussion and a ruptured inner ear.

“I didn’t even think to myself that I had been wounded in war. I didn’t feel that way. There were guys that took shrapnel that night. There were guys who were severely wounded. One of my friends lost his life that night. I did not feel at all that I was even in their category.”

He didn’t believe he deserved to be in the same group as other Purple Heart recipients. The military disagreed and a few months later he received the orders for a Purple Heart. “I thought it was erroneous,” he said. “I didn’t even tell my family at first, I thought for sure someone had made a mistake.”

When he first received the award, he argued it. “I thought that it was wrong that I was receiving this. There was some mistake about me earning the same award as someone who lost both of their legs. That’s how I felt in my heart at the time.” He doesn’t like to be considered a hero. “I served with heroes. I can name them. Not me. That wasn’t me.”

He even went to his command trying to reverse the orders. That’s when a colleague explained the significance his awards truly held: regardless of how they felt about their awards, they wore them for those that could no longer. The uniform they wore, the awards they displayed, and the pride they expressed was not theirs to question, but it was their responsibility to their fallen friends. “This is bigger than me. This isn’t just about me and my particular experiences, but it is about something bigger.”

So, Le Buhn embraced his fellow soldier’s advice and embraced the symbolism his medal held. When he left the military, he still had to address the affects that the damaging night in Iraq had on him.

“I’ve been diagnosed with severe PTSD; I’m rated through the VA,” he said. “It’s a hard life. I’m not trying to get any sympathy; it makes things a lot harder than they should be.”

Le Buhn now uses VA for primary health care and mental health care and has been since getting out of the military in 2013. The most significant services he’s received are marriage counseling and treatment for PTSD. It’s at Kankakee CBOC that he’s worked on getting a handle on all of his PTSD symptoms. Therapy started once a week, then every other week, and then once a month.

VA has helped Le Buhn handle his PTSD, but it’s his passion for comedy that has helped him cope with it.

“Comedy has given me this way of looking at my life through a particular lens where I’m looking for the punch line. Instead of feeling down in the dumps and low on myself, how do I tell this to a crowd of people and make them laugh? Without that in my life I don’t know where I’d be now.”

The end of his performance is his telling of the story that led to his Purple Heart. While his retelling of the story is skewed and is not historically accurate for entertainment purposes, the stage is still the same, a blast goes off, and he’s wounded. However, Le Buhn uses the fictional retelling to express the truth of how he felt about receiving the award.

It gives him a certain sense of satisfaction as well as a sense of peace doing something productive with his experiences by bring joy to people. He’s now able to balance how he feels in the heart: that he is in the company of heroes, but doesn’t feel like one.

“As a comedian, this is what I really want my life to be about. I want to say something meaningful in an unforgettable way. That is my goal every time I take the stage.”