Finding help and hope with a 3 a.m. call to Veterans Crisis Line 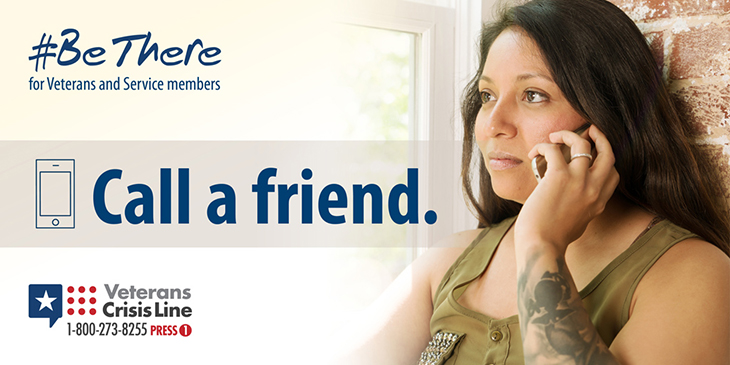 I did something the other night that I never thought I’d do. I called a crisis hotline.

It was 3 a.m. and I’d been crying for hours. All of the pent up emotions of the past few months had surfaced and I was drowning in a sea of despair.

I have no idea how I got to this point. I’ve always considered myself a half-glass-full kind of person, buoying myself up with an inherent optimism even when life threw me a few curve balls. But this divorce had knocked the wind out of me; left me gasping for breath.

Night after night sleep evaded me.  I couldn’t staunch the flood of tears, the exhaustion or the overwhelming sadness and regret.

I meticulously analyzed every decision and step that had led me to this point. The pain I saw in his face when I asked for a divorce after nearly a decade of unhappiness. That awful, 10-hour day of mediation where I let fear of court and mounting debt drive me to sign a terrible agreement –less than 50 percent time with my son and no child support. I walked away with nothing that day except for a sick feeling and a confusing custody schedule for our 7-year-old son.

My son spent a week with me and my older two kids this summer, and the first time my ex came to pick him up he had a meltdown. His young mind couldn’t grasp the fact that he had to leave one parent behind for the other. He screamed and cried and begged me to let him stay, and my heart shattered as he drove away.

Sick with regret, I talked to lawyer after lawyer, begging for a modification to the mediated agreement so I could have more time with my son. Most mocked my ignorance at the permanence of contracts, and all drilled home the fact that I had painted myself into a corner. Once I signed the agreement I was stuck for at least a year.

It was a hard pill to swallow. I had never felt so stuck. I felt I had completely failed my son by acquiescing out of fear and guilt, and sickened by the immense collateral damage I’d caused in my quest for happiness.

I couldn’t sleep or eat and my thoughts raced every night. I didn’t want to die but I didn’t want to live. I just wanted the pain to stop. I finally understood the deep, dark place that leads people to take their own lives.

“Would everyone be better off without me?” I thought in a fleeting moment. I knew that wasn’t true, but I couldn’t seem to get my footing as I spiraled out of control. So distraught over the decisions I’d made, I felt frozen in my pain.

My thoughts were so dark and ugly that one night I did something I’d never done before. I grabbed my iPad and searched for crisis hotlines for Veterans, scrolling as the words on the screen blurred from my tears. I felt fortunate I knew of these resources from my time as a military journalist.

After a quick Veterans Crisis Line survey, I was connected to Heather. I poured out my heart to the stranger on the other end of the chat; thoughts I was unable to share with even my closest friends. How I felt like a failure as a parent. How terrified I was that nothing would change. The immense, suffocating guilt I felt about causing pain to my children.  The fear I wasn’t strong enough to move on.

Heather wasn’t able to tell me anything new. She couldn’t offer a solution, just a sympathetic ear. But airing my most awful, shameful thoughts with someone neutral made me feel a little less alone, a little less like a horrible person. We chatted for a while before she linked me with a VA counselor for further evaluation.

I woke up the next day for the first time in a long time with a glimmer of hope. I knew I had to stop beating myself up and bucking against the damage already done for the sake of my children. Stop thinking about what I’d lost and focus on what I still had.

I’m not sure how talking to Heather shifted my thinking. Maybe it was airing my thoughts to someone who didn’t judge me rather than keeping them festering inside. Maybe it was knowing there was support out there. Or, maybe just talking about my problems made me realize that things, while not perfect, can always be worse.

I don’t believe I would have taken my life that night, but I know there are people out there who would, who feel that ending their lives is the only way to stop the pain. No matter how bad things feel, you are not stuck and the pain will lessen. I promise you, it will get better –maybe not drastically or right away, but in time. It always does.

Just do this one thing. Before you take any action, call a friend, a family member, counselor, or call a hotline. Find your Heather and tell her exactly what’s going on. Don’t rush into something that can’t be reversed. The one thing you do have is time; so take that time to get help.

My life didn’t drastically change because I called a hotline. My heart still breaks when my son cries for me on FaceTime during our evening chats and I still beat myself up for not fighting harder, but I am hopeful the good days will soon outnumber the bad.

I hope to never return to that 3 a.m. darkness. But if I do, I know I don’t have to bear that pain alone.  There’s support out there that can sustain me through the night.

About the author: Laney S. lives in San Antonio, Texas. She is an Air Force Veteran who currently works as an Army civilian. Laney shared with us that she loves working for and around the military and hope to make a difference for our nation’s Veterans.