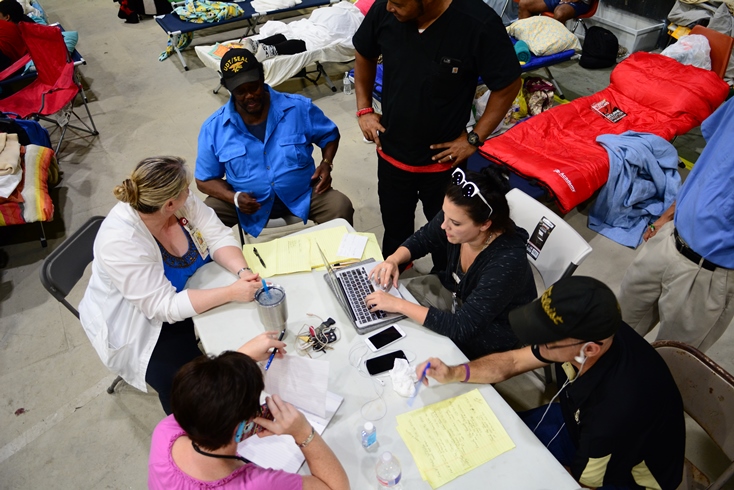 “The safety of our patients and our team is a priority.”

For the last 24 hours, rain had been steadily falling and rivers were overflowing their banks, forcing roads and interstates to close. Homes were flooding and emergency shelters were being set up in the local communities. Nearly everyone was affected in some manner and for thousands the flooding was devastating. For Rivera and the SLVHCS team, there was no time to waste in assessing damage and implementing emergency plans.

“I can’t make it to the clinic,” said Hammond clinic manager Gina Hontiveros. “Every path there is flooded, but I know the clinic is fine” as a clinic secretary who lives nearby and was able to check it out.

The Baton Rouge Clinic story was similar – safe but inaccessible.

“For the safety of all, I think it’s best if we close both clinics tomorrow,” said Rivera.

But the next morning, a few roads had cleared and several team members showed up for work anyway, spending the majority of their day either calling to check on patients, or seeing walk-ins and refilling their medications lost in the flood.

“Despite their losses, the majority of the staff presented to the clinic to provide care to Veterans,” said Stephanie Slaughter, nurse manager at the Baton Rouge clinic. “On Aug. 15, 44 employees reported for their tour of duty.”

In light of the employees being able to make it to work, Rivera made the call to “reopen both clinics for any patient who needs to be seen.”

Throughout the whole ordeal, the hospital command center was fully operational and mental health staff and social workers visited shelters to assess the needs of any Veterans temporarily residing in them.

“They kept bringing in more and more busses with people until they were filled,” said psychologist Dr. April Foreman, who went to work in shelters right away.

Social worker Jennifer Hannon was at another shelter helping to organize medical triage. Together, they called in some additional resources, assessed the needs at the shelter, and met there to help those in need.

“I had to leave my house in a quick second,” said Veteran Louis Gray, who made it safely to a local shelter. “I didn’t have time to get my meds – the water was rising. But the VA, Dr. Howard, a volunteer [at the shelter], saw me earlier and sent me over there to get my prescriptions lined up. They’re going to deliver them to me tomorrow.”

Teams of VA Police officers, pharmacy and nursing staff traveled to the clinics throughout the area each day to support the teams there, as at least 70 other staff members were impacted including 37 flooded and 11 more employees called up for duty with the Louisiana National Guard.

Employees actively reached out to reschedule more than 230 appointments, as well as assess the status of all Veterans Choice appointments, and Veterans in home-based primary care, the “Hospital at Home” program and local nursing homes.

The flooding across Louisiana is being called the largest natural disaster since Hurricane Sandy, with an estimated 40,000 homes damaged due to flooding. By Aug. 19, there were more than 30,000 people rescued and 110,000 people signed up for disaster assistance with FEMA. Forty shelters opened across 11 parishes and at the height of the flooding, more than 11,000 people were sheltered.

After more than a week, Louisiana is still recovering from this natural disaster that deposited more than 7.1 trillion gallons of water throughout the region, according to the National Weather Service. Throughout it all, VA’s Southeast Louisiana Health Care System continues to provide quality health care to its Veterans.

“We are still working this every day. And throughout everything, we never took our eye off of our patients,” said Rivera.

About the authors: This article was written by Amanda Jones, Chris Cox, Debra Ceaser-Winbush with the Southeast Louisiana Veterans Health Care System.