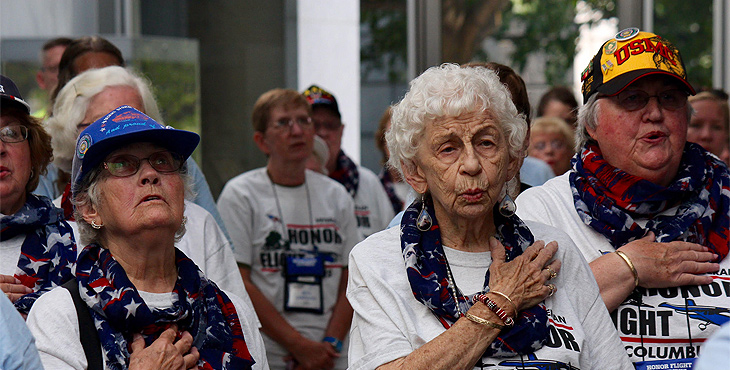 Honor Flights from across the country bring Veterans to Washington, D.C., several times a week.

But Sept. 10, the Honor Flight Columbus organization out of Ohio sent the group’s first all-women Veterans’ Honor Flight to the nation’s capital. While there, 81 women—Veterans of World War II, the Korean War and the Vietnam War—visited their respective monuments.

The trip to Washington kicked off with a hosted event at the Women in Military Service for America (WIMSA) Memorial at Arlington National Cemetery, and included stops at a number of sites: the Iwo Jima Memorial, the U.S. Air Force Memorial and the memorials for World War II, and the Korean and Vietnam Wars.

Retired Air Force Brig. Gen. Wilma L. Vaught—one of the most decorated women in U.S. military history—was among those who greeted the group at the WIMSA Memorial; in 1966, she was also the first woman to deploy with an Air Force bomber wing.

“It means so much to see this group of women come in and see what the memorial means to them, because it does mean something to them,” said Vaught. “It is seeing their service to our country paid tribute to by the nation. And yet with it all, there comes laughter and joy, and that’s the way it ought to be about serving our country.”

As the pioneers of their times, these women blazed a path that until then was only traveled for men. And yet despite their contributions, they weren’t so readily accepted as equals.

“My career field was supposed to be aerospace jet mechanic,” said retired Air Force Veteran Phyllis Collins, who goes by the nickname “Sunshine.”

“And the guys didn’t like me there … I was supposed to be working on a dead battery. They hooked it up, and I got zapped,” she said. “So I changed my career field real fast. I became a military cop.”

Decades later, there are female Army Rangers, and the U.S. military continues the push to fully integrate women into front-line and infantry units.

“It’s a lot different, what they do now,” said retired Air Force Sgt. Deb Millerberg, an aeromedical evacuation technician during Vietnam. “When I was in, I was an enlisted female, so they didn’t have female crew quarters. I got put off base when my crew was on base, or I was in TDY (temporary duty) quarters. They’ve come a long way.”

Those who took that unconventional path did so because the opportunities were greater than the challenges.

“There were a lot of difficult times, but I don’t regret a minute. Joining the Air Force opened up the world,” said Millerberg, who served in a number of overseas locations during the war. “We flew throughout Southeast Asia, all the bases, into Tan Son Nhut and Saigon (Vietnam); Japan; Korea; Okinawa, [and] Thailand. I went to Jungle Survival School in the Philippines. Everything was really exciting.”

One of Millerberg’s greatest memories was working with the crew members who helped with Operation Babylift, the mass evacuation of hundreds of thousands of children from South Vietnam to the United States and other countries (including Australia, France and Canada) at the end of the Vietnam War.

The women were just as eager as the men to do their part for the nation, but there were only so many roles available to them.

“Most times, women were not wanted overseas unless you had a nurse’s degree, and you could take care [of] or nurture the men that were injured,” said Dorothy “Dottie” Wolfe, who served in the Marine Corps, Marine Corps Reserve and Air National Guard. “But I served, and I was proud to have served. I would have gone had they sent me, under any situation. That’s what you signed the contract for, and I knew it.”

Wolfe eventually got activated for and deployed to Iraq during Operation Desert Storm, as she was approaching 60 years old.

“I don’t know how many years I’ve got left, because I’m an old woman,” she mused, “but God has been good to me, and I love this nation. If we were in need of people today, I would go back.”

The Columbus Honor Flight was much more than a group of tourists looking to take in the sights.

So many had personal stories of loss for which the memorials could provide a measure of solace and connection to the past.

It was Barbara Murray’s first chance to visit the Vietnam Wall, and she wanted to look up the captain for whom she’d worn a POW bracelet back in high school, a memento she still keeps close to her heart. “About 10 years ago,” said Murray, once a cryptographer with the Women’s Army Auxiliary Corps, “they found his remains … I’m interested in looking up my MIA’s (missing in action) name on the wall to see that it’s been changed from MIA to KIA.”

“It’s going to be quite an impact,” said Millerberg, trying to hold back the tears. “I actually flew with two people who are on the wall; so yeah, I want to see it.”

“It breaks my heart to think of so many thousands [who] died,” said Wolfe. “They had goals. They had things they wanted to do, and probably had plans that never took place because they were sent to Vietnam, because they signed that contract with the United States government, promising fidelity and whatever was required up to and including their life. But it just breaks my heart, because there were so many of them that were so young.”

VA estimates there are 21.9 million living Veterans in the United States, and about nine percent of them are women. Nationally, the majority of female Veterans served in the modern wars in Iraq and Afghanistan, with only about 13.5 percent serving in Vietnam and three percent from both Korea and World War II.

For more on women Veterans, including a number of resources for women Vets, visit VA’s Center for Women Veterans.

You can also read more about the Columbus Honor Flight at the Columbus Dispatch:  Honor flight solely for female veterans a first for Columbus.