VA psychologist is ending Veteran homelessness one job at a time 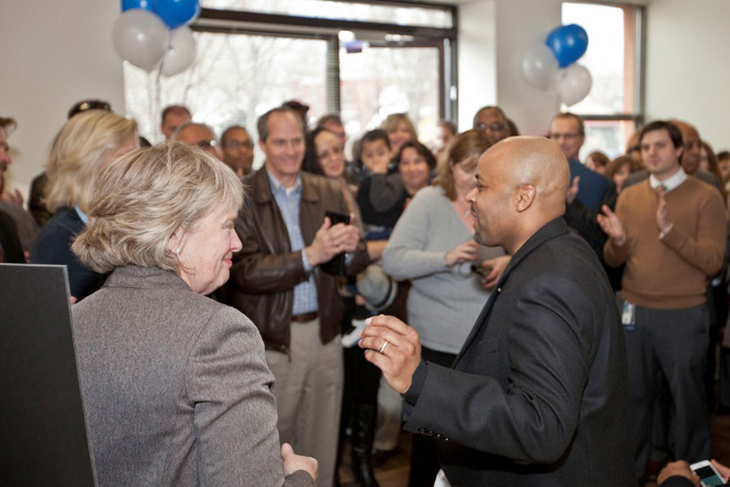 When the Air Force Association (AFA) sought nominations for the VA 2016 Employee of the Year, it received many excellent submissions. In the end, however, one candidate stood out: Dr. Carma Heitzmann, a clinical psychologist with the Veterans Health Administration (VHA) Homeless Programs Office who has devoted her nearly 30-year VA career to helping end Veteran homelessness and improve Veterans’ lives.

For the last 20 years, Heitzmann has been directly involved in VHA’s efforts to integrate community-based employment into VA’s specialized programs for Veterans who are homeless. She saw early on that for many Veterans, work is not only about earning income, but can be a critical part of their recovery and reintegration into the community after homelessness.

Dedicated to the idea that employment is a critical element in ending Veteran homelessness, in 2014 Heitzmann initiated the Homeless Veterans Community Employment Services (HVCES) and serves as its national director. She currently oversees roughly 150 community employment coordinators (CECs) who work locally from VA medical centers to connect Veterans with competitive employment.

Data shows the program is improving employment outcomes for Veterans. Between fiscal years 2014 and 2015, the employment rate for Veterans exiting VA’s homeless residential programs increased by 9 percent. As the program matures, that number is expected to rise.

Heitzmann is quick to credit these results to the CECs’ tireless advocacy in the community on Veterans’ behalf, and feels as though the HVCES team is the true Employee of the Year.

“Collaboration drives this initiative, and the CECs are behind the wheel,” she says. “CECs build relationships with local employers, arrange and attend job fairs, set up mass interview sessions, work with Veterans to improve resumes and soft skills, and do so much more—all with the goal of generating more opportunities for Veterans exiting homelessness.”

Heitzmann said CECs are expanding VA’s network of collaborators, which is essential as VA works toward functional zero homeless Veterans. CECs have partnered with, among others, American Job Centers, chambers of commerce and state vocational rehabilitation offices; with staffing agencies such as Aerotek and Spherion; with employers like CORT, DHL, Salute Inc. and the U.S. Postal Service; and with nonprofits like Catholic Charities, Goodwill Industries, Volunteers of America and The Salvation Army.

More employers are now reaching out to VA CECs to hire Veterans who have experienced homelessness. CECs in turn pre-screen Veteran resumes so employers get access to the most qualified Veteran for the job. The program now regularly receives job listings from national, regional and local employers, which creates a streamlined process for linking Veterans with open positions. Once hired, CECs continue to work with Veterans to help them stay on the job.

On  Feb. 10, 2016,nearly 200 people were on hand at a dedication ceremony to open the VA Eastern Colorado Healthcare System’s new Community Resource and Referral Center in Denver.

In addition to improved hiring collaborations, HVCES-initiated partnerships have led CECs to create bike donation drives for Veterans so they can get to and from jobs in rural locations, secure gifts of laptops for Veterans’ use in job seeking and host a career expo that drew the participation of a governor and U.S. senator.

Success is no accident

Although quick to share her award with VA staff, Heitzmann’s colleagues nevertheless say her success is no fluke. They attribute it to her flexibility as a leader, willingness to innovate and dedication to team up with just about any entity—inside or outside VA—if it means one more Veteran will thrive.

“It’s thanks to Dr. Heitzmann’s ingenuity that employment is now a central pillar of VA’s work to end homelessness among Veterans,” says Samantha Loving, who works closely with Dr. Heitzmann as the HVCES national program manager. “It may seem now like a natural area of focus, but it took Dr. Heitzmann’s vision to make it a reality, and her drive to build the program from the ground up.”

Heitzmann’s direction has also led to employment success being added as a performance measure to assess the effectiveness of the Housing and Urban Development-VA Supportive Housing (HUD-VASH) program, another key initiative that’s helped VA cut homelessness among Veterans by nearly 50 percent since 2010.

On Sept. 19, 2016, Heitzmann was honored at a formal awards ceremony outside Washington, D.C., in conjunction with the 2016 Air & Space Conference and Technology Exposition.

If you’re interested in more information about helping homeless Veterans, please visit some of the links below.

Danielle P. Latimore, a licensed social worker, is executive assistant and director of business operations for VHA’s Homeless Programs Office. As principal staff adviser to the office’s executive director, she manages the office’s administrative operations and personnel management activities. Latimore has a master’s degree in social work from Washington University in St. Louis and a bachelor’s degree in psychology from the University of Virginia.