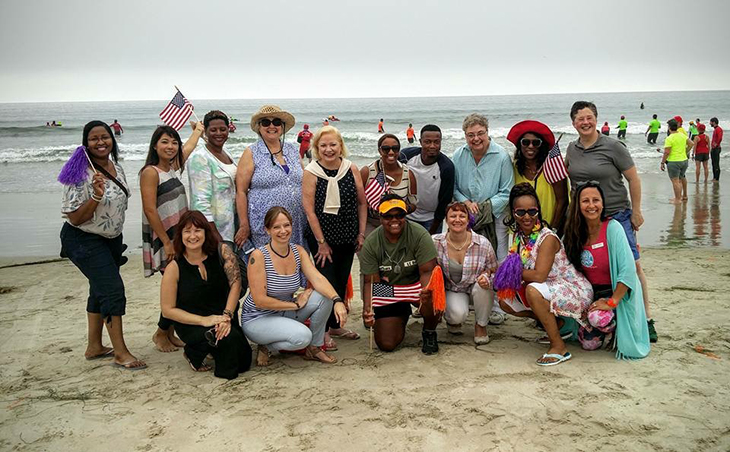 It was an absolute honor and pleasure to attend the recent Advisory Committee on Women Veterans site visit to San Diego, California.  As a newly established San Antonio, Texas resident, it was also a great homecoming.  In 2012, after 30 years of Naval Service my last duty station was in San Diego, and that is also where I transitioned from the DoD to the VA healthcare system.  There are many new programs that weren’t in place when I enrolled; particularly in support of omen Veterans.

My transition experience was fine, but this site visit gave me an inside view into how far VA has come in its women Veteran programs and advances including gynecological services, primary and specialty care, therapies and protocols for military sexual trauma, homelessness, vocational rehabilitation, claims processing, and recreational therapy.  Additionally, visiting Rosecrans and Miramar National Cemeteries demonstrated there is immense effort and care to ensure the utmost respect and dignity is given to those who served and their loved ones. VA, along with private organizations, works together diligently to ensure beautification throughout the grounds.  Both cemeteries were maintained well beyond my expectation.

It was evident there is “top down” engagement in supporting over 500,000 Veterans in the (southern) Pacific catchment area, specifically the 48,500 Women Veterans across four large counties.

Touring rehabilitated facilities and hearing from the various program managers and VA leaders was informative and impressive, but the highlight for me was the National Veterans Summer Sports Clinic. Various public and private organizations collaborated with the San Diego VA’s Recreational Therapy Program to bring together 130 Veterans who participated in various team building and sporting events, including surfing, kayaking, bicycling, paddle boarding, and my personal favorite, rock climbing.  I even had the opportunity to experience what the other Veterans did by taking a ride on one of the adaptive bicycles and even participated in the thrill-seeking rock climb – it was fantastic!

This level of hands-on support and recreational training led to an enormous demonstration of increased self-esteem in the Veterans and gave them a renewed sense of “normalcy” as many were adapting to uses of special kayaks and surfboards, bicycles, wheelchairs, and even being around others if they were previously crippled by the invisible wounds of post-traumatic stress disorder, severe anxiety, or depression.  I’d never seen so many happy faces than I witnessed that day, not only from the Veterans participating but also the volunteers, which included many active duty men and women who saw first-hand what they can expect once they too become Veterans in the VA Healthcare system.

The biggest takeaway from this impressive week was the concerted effort and dedication from VA leadership, staff, and the public/private collaborations, which I believe embodies the Secretary McDonald’s vision, goals, and mission for all VA Healthcare systems.

Octavia D. Harris is a retired U.S. Navy command master chief and a member of the VA Advisory Committee on Women Veterans.  She currently resides in San Antonio, Texas, and serves on the local Community Advisory Board for Veterans.