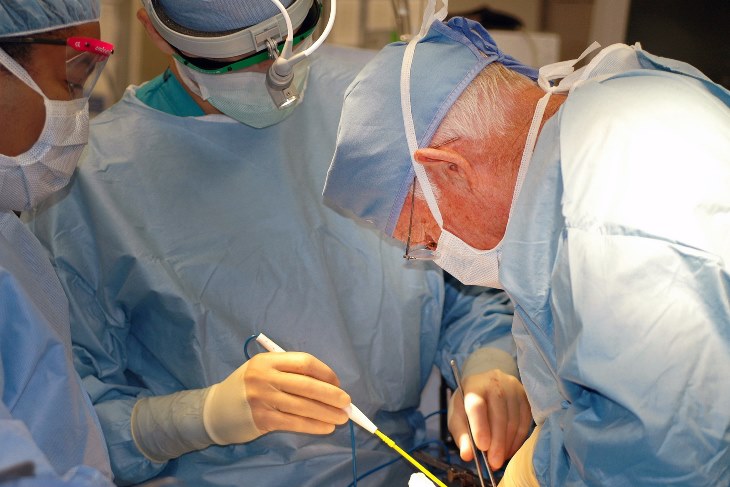 Dr. Hilliard Seigler has been making a difference in the world of medicine since 1967 when he walked through the doors of the Durham VA Health Care System in North Carolina to his research laboratory and surgical clinic.

At age 82, the retired Army colonel and staff surgeon is VA’s oldest Veteran employee. Though modest about his civilian and military career successes, Seigler is not shy about sharing his commitment to serving Veterans, VA’s strong relationship with its Duke University affiliate and teaching medical students and residents how to best care for the nation’s heroes.

When Seigler is discussing his military, VA or Duke positions, he makes it clear that interconnected relationships have been the foundation of all his careers. After volunteering for military service in 1961, Seigler served in the 3274th U.S. Army Hospital in Durham, North Carolina, trained with the 5th Medical Brigade and headed to Fort Bragg’s Womack Army Medical Center to treat patients each time troops deployed. He said serving in the military and having dual careers at VA and Duke was ideal, helping him to better understand both missions, which have led to exceptional outcomes.

“I began as a general surgeon in the military,” Seigler said, adding that he was fortunate to receive valuable training that strengthened the relationship between the military and industry. “I taught at a variety of DoD medical centers, to include my specialty in transplants, because the military was just getting into that and this benefitted everyone.”

Since he graduated from the University of North Carolina as a trained surgeon and during his 49 years at VA’s Durham Medical Center, Seigler has bridged the field of immunogenetics between VA and Duke, exploring the relationship between the immune system and genetics for organ transplants. Then a science in its infancy, Seigler explained that transplants were just beginning to be performed (pointing out Duke’s first in 1965), and smiled as he recalled those exciting times of discovery.

“Defining and identifying what the human response would be to ’‘immunogens’ [the antigens that can trigger the immune response to organs resulting in its acceptance or rejection] allowed me to pursue both academic and clinical paths,” Seigler said. “Research was very big, even back then, and we were very successful in getting research support and grants, which is why I began my career at the VA.”

Dr. Hilliard Seigler, a researcher and surgeon at the Durham VA Health Care System as well as Duke University, where the Durham VA shares an affiliation, is VA’s oldest Veteran employee. (VA photo by Linnie Skidmore)

“Seig,” as he is affectionately known to friends and colleagues, praised VA’s continuous commitment to funding research, which he said he’s been privileged to receive throughout his tenure.

VA’s research funding is available only to VA employees, Seigler said, which is why many of the best researchers and clinicians in the world choose to wear the VA emblem on their lab coats. Further, collaboration between VA researchers and academic institutions can significantly benefit to Veteran’s health care, he said, because it enables a direct connection from patient needs expressed in clinical visits, to innovations developed in labs, which are then applied to address those needs. According to VA, more than 60 percent of its researchers are care providers, making all of this possible, and Veterans remain central to the process throughout VA’s advancement of health care.

“It’s important to remember that although VA may be a research program that focuses on the needs of our Veterans, the VA’s tremendous successes have both changed the lives of Veterans, as well as had a positive impact on all mankind,” Seigler said, adding he’s been honored to be a part it. He makes no bones about that the fact that a team effort has driven the success of, not only his long career, but also VA clinicians across the country.

“Without question, Seig has been one of our most productive and universally respected surgeons for many years,” Lawson said. “Our patients, trainees and staff have benefited greatly from his wealth of knowledge, surgical expertise and sincere dedication to the VA. Truly, he is a living, breathing national treasure.”

Servicemembers deserve the best medical care, and the Durham VAHCS meets that expectation every day, Seigler said. “The faculty at Duke University Medical Center is the same, residents are the same and we share these responsibilities of caring for these men and women equally, which is why we can say there is no better care in the world than here at the VA.”

Seigler shared a recent story about mentoring a medical resident, who was treating a Veteran patient for skin cancer. During the exam, he said he was coaching the resident about the importance of being thorough, to include recognizing signs a patient might have received an organ transplant. During the discussion, the patient said he had, indeed, received a kidney, 38 years earlier. He said he was thankful to VA, and would never forget the doctor. Seigler asked the doctor’s name, then shared that he was the doctor who had performed the surgery.

The patient responded with surprise, “My gosh! You look older!”

“As do you!” Seigler replied with a chuckle.

Seigler said he applies that same enthusiasm to debunking misinformation about VA whenever he has an opportunity. From how he and his Duke colleagues determined why a transplant was rejected, to the construction of a team “care map” to ensure optimal oversight after a heart or kidney transplant, Seigler is passionate about setting the record straight. He said Veterans can trust VA and have confidence that it’s because of committed relationships that they are being treated by the “cream of the crop” when it comes to health care. And he is always prepared to share VA successes to emphasize that point. “I have enjoyed my VA career,” Seigler said, pausing to adjust the black and gold Army pin on his VA lab coat. “I believe in this mission and the dedicated people who are doing it.”

About the author: Jennifer Askey is the VISN 6 communications director, responsible for providing Public Affairs, Community Relations and Legislative Affairs support to the VISN organization. She previously served as the medical center Public Affairs Officer in Philadelphia, Pa., and Hampton, Va., where she oversaw all aspects of the Communications Department.