Veteran, VA employee proud to honor Veterans past and present 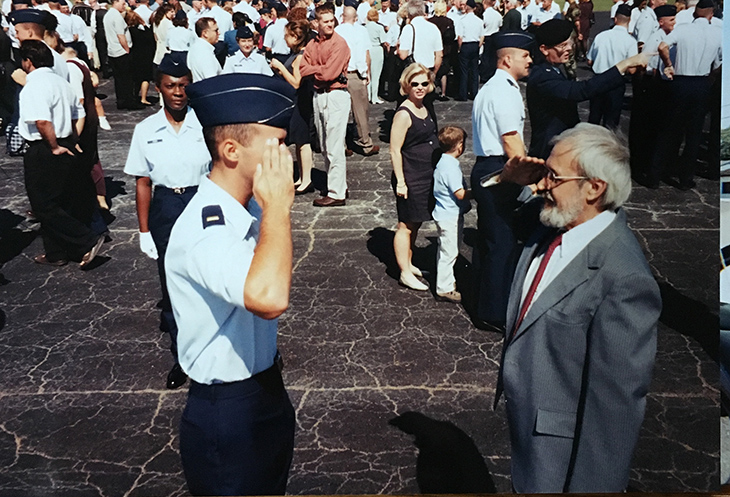 A few weeks ago, I submitted my father-in-law Jack Shannon for VA’s Veteran of the Day. He is the poster child for “war hero” – he jumped out of planes, took fire, mourned fallen brothers in arms and wielded his M1 carbine to take out enemy forces advancing southward into the Republic of Korea. He wore the uniform for two years and two days, and when he came home, he hung it up, started a family, and got on with carving out from his youth his piece of the American dream.  He passed away in 2014, and would have been 87 on Nov. 1. On behalf of my wife and our family, I wanted to honor his life by honoring his service, and the Veteran of the Day feature let me do just that – you can read more of his story here.

I’d also like to honor my dad, who also passed away a few years ago, and who also served in the Korean War. He was in the Air Force, and his short career was just as colorful as my father-in-law’s, but in a more sordid way. He enlisted when he was 17 to escape a difficult home life, with a neglectful mom and an overbearing step-dad.

He couldn’t have known it at the time, but his technical training put him on the ground floor of the nascent computer industry. His job was to work on room-sized computing machines that chewed up paper punch cards and spit out information. To help him troubleshoot problems and be more efficient in this work, he created his own tech support manual – a binder of hand-written notes and drawings detailing repeat problems and how he fixed them. The tool should have been mimeographed and couriered to every station across the globe, and he should have been promoted for his initiative and cost-saving efforts. Instead, when a new guy showed up three months into his tour, Dad simply handed over the binder and all of his duties, and took up dealing blackjack at the Officer’s Club. Apparently that was something you could do in the service back then.

The devil played well with all of this idle time and cajoled Dad into other non-career-advancing pursuits. According to my father, he got himself into relatively petty crimes of selling black-market cigarettes and helping a buddy try to fence silverware stolen from the club. There may or may not also have been a scheme to smuggle Korean refugees to Japan or elsewhere. This “freelance work” was certainly not motivated by compassion and a calling to do humanitarian work; for my still teenaged dad-in-uniform, it must have been all about the won, if not the excitement of simply seeing if he could pull off deeds of that magnitude. Whether because of these schemes or not, Dad had the dishonor of being busted down in rank at least twice. When I enlisted in the Air Force a few decades later, my 47 college credits started me at a higher rank than what he separated as.

Dad told me these stories over coffee just a few years ago. I had just spent the morning with him at a doctor’s appointment at the VA in Wichita, where his oncologist reminded him – and told me for the first time – that while the chemotherapy for his lung cancer was slowing the growth of his tumors, it was all borrowed time. I wasn’t ready to hear that, and Dad probably wasn’t ready to talk about it, either. So instead, our conversation drifted to something enduring and endearing to each of us: our shared experience in uniform.

Jeff Bishop with his parents George and Dorothy Bishop at his graduation from Officer Training School in 2000.

When I enlisted in 1995, like father, like son, it was for all the wrong reasons – though I had weaker excuses: I was simply an aimless, broke college drop-out. The Air Force was my best opportunity to make some money, learn a fall-back trade and get the G.I. Bill to resume my studies, if and when I ever did find myself. Integrity, service and excellence had to be painfully drilled into me at basic training. Along the way, like my Dad, I grew up a lot: I finished my degree and earned a commission. I deployed a few times – and returned home with my own stories. I have raised a family, and today, I wonder if my two young sons will enlist – and if either does, I wonder what stories they’ll have to share with me.

Though I left the active duty in 2007, I was drawn back to service in 2013 – for all the right reasons, including patriotism, a desire to serve, pride and esprit de corps. I was accepted into the Missouri Air National Guard, and today, when I’m not serving my state and my nation, I work for the VA, helping doctors and nurses and social workers and clerks find and access the best-quality education and training programs to help them remain the best-qualified experts to care for today’s Veterans. It’s been a great ride so far – and it’s one that I’m glad to still be on.

I love my father all the more today; simply for who he was: a hard-working, stoic, introverted man of high principles – but also, for who he was then – and by nature, who he must always have been: a rogue scoundrel simply making his way through life.

My dad eked out a general discharge from a less-than honorable military career. My father-in-law was a snake-eater’s snake eater (though he lost his taste for ham after always finding maggots in his C-rations). Meanwhile, I’ve had an above-average career as a white-collar military professional, serving on the fringes of nearly 20 years of constant warfare. And yet, the VA honors us all: for who we are, for what we did – and sometimes even despite what we did. All because we served.

I’m extremely proud of my service to my nation in uniform, and that both of my fathers served before me. But more than that, I’m proud that United States has established a Department of Veterans Affairs, whose work force – as I know first-hand – is today and forever dedicated to keeping the promise first made by President Abraham Lincoln in his second inaugural address: “To care for him who shall have borne the battle, and for his widow, and his orphan.”

Jeff Bishop is associate director for marketing and communication with the VHA Employee Education System.  As an active duty Air Force Veteran, he deployed in support of Operations Southern Watch, Enduring Freedom and Unified Assistance, and continues to serve his nation and his state as a member of the Missouri Air National Guard.