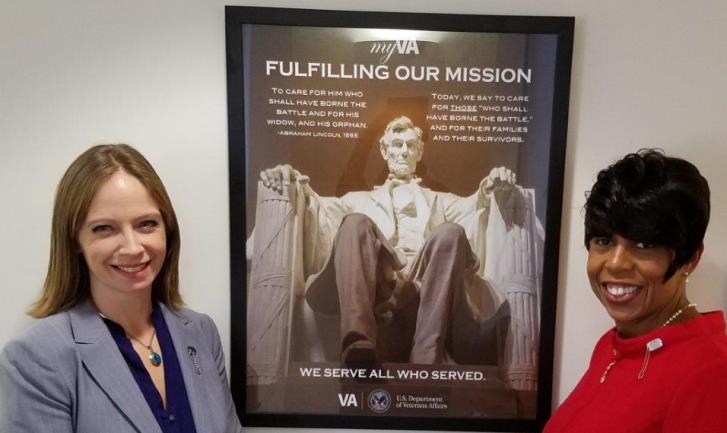 Since I arrived at the Center for Women Veterans in 2004, we’ve received countless requests to “change” the words from Abraham Lincoln’s 1865 Second Inaugural Address that form VA’s motto, “… to care for him who shall have borne the battle and for his widow, and his orphan.”

While the spirit behind Lincoln’s words has stood the test of time, Secretary McDonald has updated their use in our motto by showing how the VA of today – “MyVA” – fulfills our mission: “Today, we say to care for those ‘who shall have borne the battle’ and for their families and their survivors.”

This language, while retaining the core message and key words from Lincoln’s speech, is more inclusive and representative of those who serve today, as well as those left behind when one of our nation’s heroes makes the ultimate sacrifice.  Hats off to VA’s office of Women’s Health Services, which developed a poster reflecting this changed emphasis.  They also offer many other thought-provoking outreach posters that may be downloaded.

Kayla M. Williams, director of the Center for Women Veterans, and I had the pleasure to replace this poster in our office where a poster with the previous motto’s words hung.  I’m reminded of the Lao Tzu quote, “The journey of a thousand miles begins with one step.”  Women have served in the military from the birth of this nation, even when they had to disguise themselves to do so – and even today, gender still plays a significant role in how women are recognized and portrayed.

Today, there are roughly 2 million living women Veterans, and while we are over nine percent of the total living Veteran population, our military service often is hidden in many articles, books, research and images depicting military heroes.  When will the “she-roes” of the world get their due accolades?  I believe that our young girls and boys are paying attention to our words and images and that one day, they will notice the many awards of valor that were earned by both men and women; they will understand that when we speak of wars, both genders were present and both men and women have died for our freedom.

So by hanging this new poster here in VA’s central office and more consistently using this more inclusive language throughout the department, I believe that we are taking another step toward a time when all Americans recognize that women and men have served in our military and uniformed services, and that one day all Veterans will be recognized for the jobs we do during our military service. Until that day arrives, we must continue to press for greater recognition.  I encourage every woman who has ever served in the military (active or reserve) or her family to make certain her name is in the database of the Women in Military Service for America or the Women’s Memorial (WIMSA), located at the gates of Arlington National Cemetery.