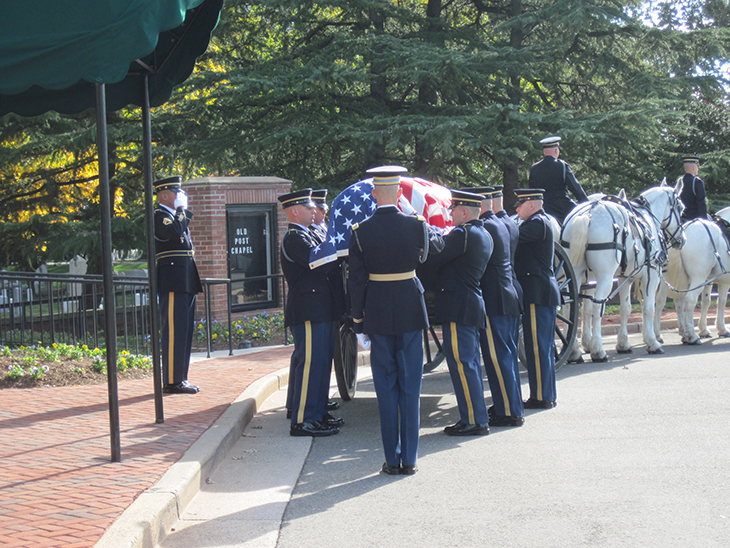 As we welcome in the new year and reflect on all those we’ve bid farewell to in 2016, I’d like to add a final farewell to the story that was shared in April 2016 on World War II retired Lt. Col. Luta “Cornie” McGrath – one of the oldest known women Veterans, who passed away April 14, 2016, in her home in Annandale, Virginia. She was 108 years old. In November 2015, McGrath was featured as VA’s #VeteranOfTheDay.

On Oct. 31, a large group of family and friends gathered at the Old Post Chapel, Ft. Myer, Va. to say a final goodbye to our beloved comrade. Cornie, as most of us knew her, was a legend, known for her dedication to her country, her community and her church.

Her military service began as a private in the Women’s Army Auxiliary Corps in 1943, and continued until she retired in 1961 as a lieutenant colonel. Initially assigned to an Ordnance Corps position at the Red River Ordnance Depot, Texarkana, Texas, she had many repeat assignments with ordnance. She was the first woman inducted into the Ordnance Corps Hall of Fame in 1985.

She continued serving in retirement, supporting community, Army and Veterans, and church activities. She was a frequent speaker or guest at Memorial and Veterans Day events, and at World War II Memorial activities, and attended bi-annual women Veterans’ luncheons until shortly before her death.

Services for Lt. Col. McGrath began at the chapel with a memorial mass and brief eulogy from Ordnance Corps representative, Col. Sean Davis, who came from Ft. Lee, Virginia. Transfer from the chapel to the grave site was by caisson with full military honors. Graveside honors included a three volley rifle salute, a bugler playing taps, and the folding and presentation of the flag.

Following the graveside services, a reception was held at the Women’s Memorial. A brief program featured Brig. Gen. Wilma Vaught, president emeritus of the Women’s Memorial Foundation, and Col. Davis who both lauded Lt. Col. McGrath’s dedication and long service.

Thanks to Col. Pat Jernigan who provided the details and photos for this final farewell.  Cornie will be missed by so many but her legacy will always be with us.