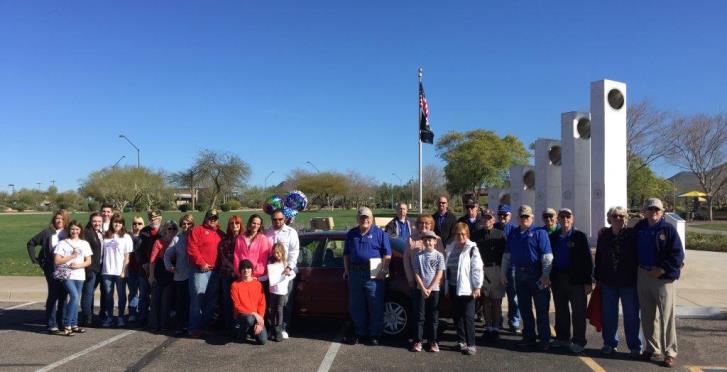 Ockomon served nine years with the Army National Guard as a tanker and also served on active duty with his unit, securing the United States’ border with Mexico. He has worked at the Prescott National Cemetery since April 2016 through the VA’s compensated work therapy (CWT) program.

Ockomon will graduate from the CWT program in April 2017 and is hoping to obtain permanent employment at the VA. The vehicle, donated by the Daisy Mountain Veterans, will provide Ockoman with dependable work transportation.

Daisy Mountain Veterans president Dennis Hider presented the automobile at a ceremony that was attended by Ockomon’s family, representatives from Texas Roadhouse, Prescott National Cemetery, members of Crossroads Church, Veterans First Ltd. and Daisy Mountain Veterans members. The presentation was the 8th made by the organization in the last three years.

“I am extremely honored and grateful for the support of the Prescott community, Daisy Mountain Veterans, Prescott National Cemetery and many others who have helped me throughout my career as a soldier and civilian,” said Ockomon. “I am very humbled to be the recipient of such a great gift.”

Jessica B. Jacobsen is the director of the Dallas Regional Office of Public Affairs where she provides support and counsel to VA facility directors and public affairs officers within a seven-state southwestern region.