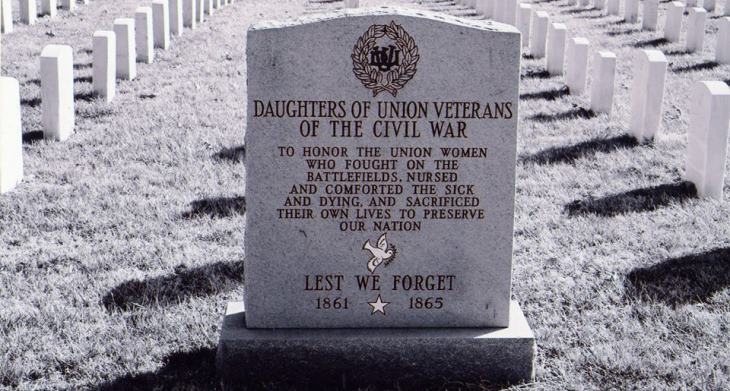 March is national Women’s History Month, where we honor the women who have been a vital part of the U.S. Armed Forces and its community of Veterans. The National Cemetery Administration has 135 VA national cemeteries across the country, which serve as eternal shrines for the Veteran community and other eligible individuals.

These monuments honor women of all positions, ranks, titles and backgrounds, and from all conflicts in our history. The Daughters of the Union Veterans of the Civil War monument, for example, located in Jefferson Barracks National Cemetery, honors the Union women who fought on the battlefields, nursed and comforted the sick and the dying and sacrificed their own lives to preserve our nation. At the Ohio Western Reserve National Cemetery, a monument honoring all “sea service women” stands in honor of the WAVES (Women Accepted for Volunteer Emergency Service), dedicated in their honor in 2003. The Women Marines Association placed a monument at Dallas-Fort Worth National Cemetery pays tribute to all women, past and present, who have served their country with honor and pride in the United States Marine Corps. Written on this monument are the words, “We are the fewer, the prouder, the women Marines.”

The National Cemetery Administration continues to partner with VA’s Center for Women Veterans  to focus outreach activities to inform women Veterans and their families about the benefits and services they have earned.

There are many monuments to women Veterans in VA national cemeteries across the country. During this month, we encourage you to find one near you, and to learn more about the contributions, serve, and sacrifice of the American women Veteran.

Jessica L. Tozer, a U.S. Army Veteran (2002-2006), is the web communications officer and digital services lead for VA’s National Cemetery Administration. She was a communications specialist and content manager for the Department of Homeland Security Science and Technology Directorate from 2015-2016. From 2011-2015 she was the social media content manager and editor-in-chief for Armed with Science, the Department of Defense science and technology blog. She is a lifelong science fiction fan, and a huge supporter of the Veteran community.

Dr. Betty Moseley Brown is the acting director of the Center for Women Veterans at VA Central Office, in Washington, D.C. The Center monitors VA’s administration of benefits and services for women Veterans, and promotes the agency’s recognition of contributions made by women who served in the armed forces.