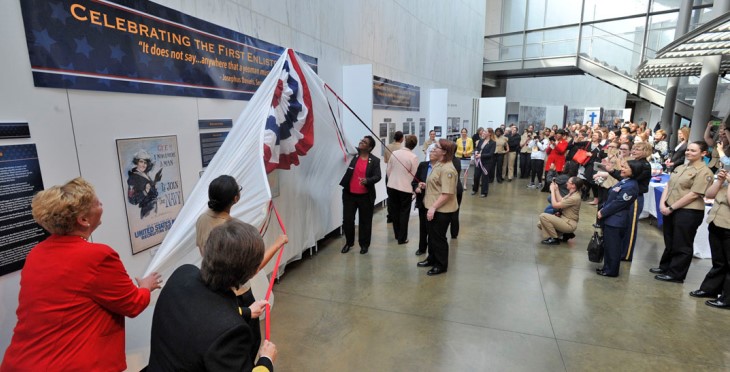 Since the American Revolution, women have served on America’s battlefield. They served as nurses, spies, cooks, and even disguised themselves as men to fight in the ranks. But it wasn’t until World War I that women officially wore the uniform. It all started on March 21, 1917, when Loretta Perfectus Walsh enlisted as a chief yeoman in the Navy.

A loophole in the 1916 law that established the Naval Reserve Force identified “citizens” and “persons” as eligible to join the force, but not specifically “men.” The Secretary of the Navy directed the enlistment of women into the Naval Reserve in order to fill the ranks of the Navy’s growing fleet and keep up with the demands of clerical and shore duties when the Great War started.

During a ceremony at the Women in Military Service for America Memorial at Arlington National Cemetery, women Veterans gathered for the centennial anniversary of Walsh’s enlistment to honor the service of more than 2.5 million women Veterans who have since served our country.

“Walsh served in the Navy before women were even allowed to vote, and yet she earned equal pay. It therefore seems fair that the centennial anniversary of her enlistment falls during Women’s History Month,” said Kayla Williams, director of the VA’s Center for Women Veterans. “As we now recognize the histories of both World War I and women in this beautiful venue, let us honor her and all our sisters in arms for the trails they blazed for all of us,” she said.

Also in attendance were a group of young women from the Rancocas Valley Regional High School Naval Science Junior Reserve Officers Training Corps from Mount Holly, New Jersey. The NJROTC unit provided the color guard for the ceremony. Navy Veteran Michelle Keyes, a Naval science instructor for the NJROTC program, found out about the program through social media and wanted to bring a group of young women to the ceremony.

Cadet Petty Officer 2nd Class Rebecca Tatum, a sophomore, had the honor of holding the school’s flag in the honor guard. She joined NJROTC to prove to her older brother that she could do anything that he could do. “I wanted to prove that he didn’t have to protect me or baby me because I was his little sister. I was going to learn how to drill and sound off and use my big girl voice and boss people around. It’s not all like that, but some of it is like that, and I definitely became a much better person, a better leader, and I definitely proved that I don’t need him to stand up for me,” said Tatum.

This event is one of many being held across the country honoring the 100-year anniversary of World War I. The U.S. World War One Centennial Commission serves as the lead organizer for the nation’s commemorative events and coordinates the activities of thousands individuals and institutions as they tell the story of the Great War. The commission’s mission is to raise awareness of and give meaning to the events of a hundred years ago, using educational experiences and programming for all ages. Find out about more event and the commission’s work at http://www.worldwar1centennial.org/