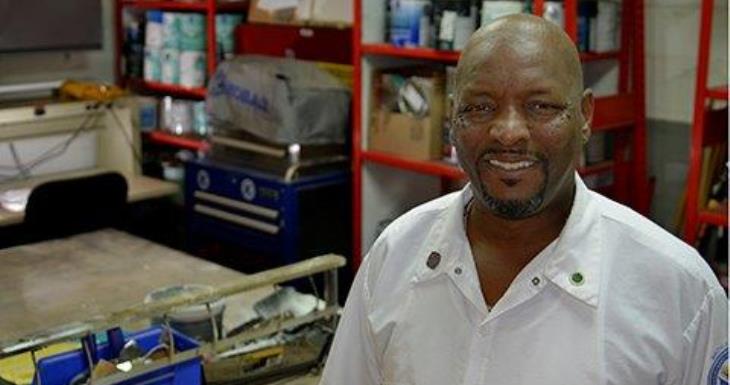 Alexander Aiken greets every day at Ralph H. Johnson VA Medical Center with enthusiasm and gratitude. While he’s always the first to share a playful wisecrack, the Army Veteran is all business when it comes to his job as a painter at Charleston VA and takes great pride in his work. However, Aiken’s approach to his life and work wasn’t always so bright.

In 1986, Aiken moved back to his hometown of Savannah, Georgia, after six years of military service. The transition from military to civilian life was not easy. After separating from the Army, what before had only been casual use, quickly turned into drug and alcohol addiction.

Aiken’s poor choices resulted in a string of dead end jobs, failed relationships, and years in and out of jail and prison. It wasn’t until 2010 when Aiken was doubled over in pain and in need of surgery for a hernia that he ever considered going to VA.

“At that time, I didn’t even know VA was an option for someone with my past,” Aiken remembers. “But at that point I didn’t have anything to lose.”

Aiken was assessed at VA clinic in Savannah, and then sent to Charleston VAMC for surgery. While there, he met VA social worker Latisha West who worked in homeless program at the time. When she learned he did not have stable housing, West encouraged Aiken to take advantage of VA’s transitional housing program. For months he resisted, but eventually returned to Charleston to begin what would become an unyielding pursuit of sobriety.

Aiken thinks back to when he made the decision to get help. “I’d always heard that one in 100 will make it. Only one person’s going to get clean and stay clean. I was determined to be the one person. Every day, I know I’m going to be the one who doesn’t fail.”

Aiken committed himself to getting clean while he was in Charleston, and enrolled in the medical center’s Substance Abuse Treatment Clinic. (This program is now called the Substance Treatment and Recovery program, or STAR.) He got a bed at Vet Villas, began taking classes through Upward Bound at Trident Tech, and was accepted into VA’s Compensated Work Therapy program. Aiken re-learned practical skills and responsibilities that had escaped him in the 24 years since he’d left the Army, and pick up principles he still carries today.

Alexander Aiken’s life has changed drastically since he dedicated himself to sober living. He credits Charleston VA Medical Center and the people he’s met along the way with helping to turn his life around.

“I see people who I went through the program with, people who went through before me, and a lot of them are doing well. I try to emulate people who have been successful, and associate myself with people who are going places. Don’t be afraid to ask questions. Watch, listen and learn.”

In 2012, Aiken was hired at Charleston VA as part of the outside grounds/maintenance staff. That same year, he met an Air Force Veteran named Karen, who’d become his wife. According to Aiken, she is the best part of his new life. He speaks with admiration about her strength.

“Iron sharpens iron,” Aiken says of his wife, who inspires him to continue life on the straight and narrow.

The couple shares a desire to help other Veterans who struggle with substance abuse, and hopes to one day establish a non-profit organization to former service members who are ready to change their lives.

“The best part about working at VA is the comradery you feel being around so many other Veterans. You always have people around you who you can share your story with, and you can listen to theirs,” Aiken explains. “There are some things that only another Veteran can understand; and some things only another addict can understand. I can always identify other Vets who are where I’ve been. And if they’re serious about changing, those are the ones you can help.”

Aiken’s dedication to sober living continues to pay off. In 2015, Aiken became a first-time homeowner. And last year, he was promoted to the position of painter. Aiken has seven years of sobriety and counting.

“Now I’m just grateful for every day. I’m glad that now I have the opportunity to share my story to help someone else.”