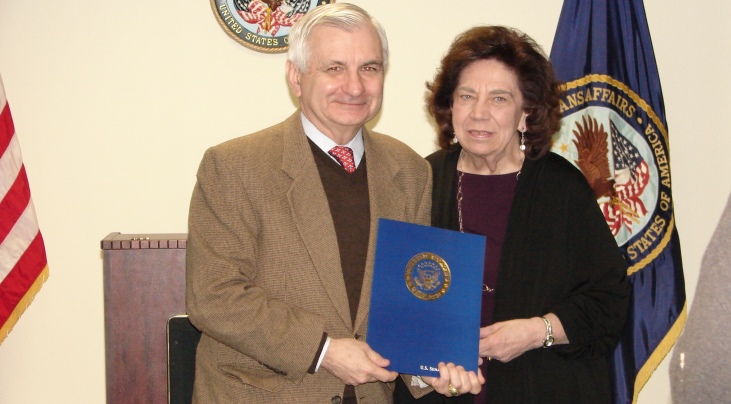 The year is 1966.  President Lyndon Johnson signs a law creating the Department of Transportation, the Beach Boys release their Pet Sounds LP to mixed reviews and a TV show where one of the main characters, an extra-terrestrial with pointy ears, comes to TV’s across America as Star Trek makes its network debut on NBC.

Also during 1966, two young women make their way into the federal building in Providence, Rhode Island to take the civil service test.

“I didn’t even want to take the test, I just went because my friend wanted company,” says Carla Murchelano, reflecting back on that day in 1966. “As it turned out, I passed and she didn’t.”

“When I started at VA, I was in the steno pool – I cried every day,” she said describing the experience.

To say that Murchelano is a bundle of energy is a vast understatement. She still keeps a remarkably busy schedule for anyone her age, which she steadfastly refuses to disclose.

“When I pick up my prescriptions and the druggist asks “date of birth”, I just say January 5, I figure the rest is on the screen anyway – no need to announce it to the whole store,” she said.

On March 27, Sen. Jack Reed took time from his busy schedule to personally recognize Murchelano’s remarkable service to VA and to Veterans.  He participated in the presentation of a 50-year VA service pin and presented her with a certificate of appreciation of his own.  He marveled at her dedication and focus and reminded us of how lucky Veterans are to have her in their corner.

The changing landscape of VA

This year – May 23 to be exact — will mark her 51st work anniversary with VA, and she has seen some remarkable changes over the years.

“When I started off, we were all on one floor in the John E. Fogarty Federal Building,“ Murchelano remembers. “Adjudication, vocational rehabilitation and Veterans’ services, the file room was upstairs.”  These days the RO has more than 250 staff, taking up space on every floor of the six-story building it presently occupies, and the “steno pool” and the file room are no more.  She has experienced three moves and countless changes in technology, but the one constant has been Carla Murchelano’s service to Veterans and the lives she has touched along the way.

“I was inducted as an honorary member of the Navy’s Women Accepted for Volunteer Emergency Service (WAVES) many years ago, and it was there I met a very troubled young woman Veteran,” she said.  “She literally had no place to go, she couldn’t live with her elderly parents because they were in Section 8 housing; she had no family and no one to live with.”  As Murchelano tells the story, a tear forms in her eye.  She’s never far from a box of Kleenex.

“So finally, we found a spot for her at the Rhode Island Veteran’s Home – she became the youngest resident of the home, all the Veterans looked out for her as she left each day to go off to college.”  The young woman graduated with a 4.0 grade point average and today is very successful.

A touching story, if that’s where the story ended, but just like Carla Murchelano, the story goes on.

“One day, I see her come into VA and she’s got her son with her, a returning Veteran from the wars in the Middle East,” she says. “We were able to get him into the system and process his claim for PTSD.”

Clearly, Murchelano formed a bond, a bond that spans multiple generations of Veterans.  “So one day, he comes by and he has a young woman with him,” said Carla, “It turns out she’s his new girlfriend and he wants to make sure I approve.”  The tear in her eye has become a twinkle.

Into her 51st year with VA, Carla Murchelano works on some of the most emotionally demanding cases seen by Veteran’s service representatives today: Post-Traumatic Stress Disorder (PTSD) and Military Sexual Trauma (MST) cases. With her vast experience at VA she has become a walking-talking directory of social service professionals, clinicians and health care providers.

Carla is also at the forefront of Women Veteran issues, working with representatives from the military.  She proudly points to her involvement in the creation and dedication of the Women’s War Memorial at the Rhode Island Veteran Cemetery.

“There’s a miniature version of the memorial that makes the rounds,” says Carla, “I get the month of March to display it in the RO’s public contact area.”

Recently Murchelano met and befriended a filmmaker, Susan Sipprelle, creator of a compelling documentary “Soldier On: Life After Deployment” chronicling the lives and challenges faced by three young women Veterans after their post-9/11 deployment.

“It’s a very moving documentary and I am proud to say I was able to convince Susan to bring the documentary here to show at the regional office,” she said.

When asked what’s next, Murchelano raises a scornful eyebrow and fires off a mocking “Retirement?  No way.”

And there are generations of Veterans, served by the Providence VA Regional Office who are extremely grateful that, just maybe, their grandchildren may one day access VA benefits with the help of the kindly, knowledgeable, and compassionate woman who passed her civil service test way back in 1966.  We celebrate Carla Murchelano’s 51 years of service – here’s to many more.