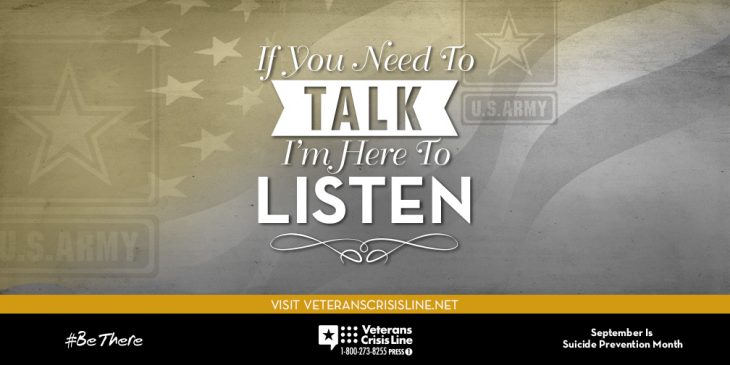 The topic of Veteran suicide is very a personal and emotional one for me. Most Veterans – and I am one – have a hard time verbalizing or showing our feelings. That’s one of the reasons why we tend to have higher rates of suicide than the population at large, and why many of us suffer silently with anger, depression and anxiety.

In my experience, most Veterans feel more comfortable disclosing painful information with those who have experienced similar events and can readily relate to the perils of military service. War is not a Hollywood set with witty dialogue and leading characters at the ready when operations go wrong. It is chaotic and unpredictable, and full of people both resilient and fragile.

My journey with suicide began with a dear friend and mentor who went out of his way to help me through some tough times. About 10 years ago, I was sending many of my own troops to war. Each of them was facing more than a year in a war zone and I, too, faced an impending deployment. I had an 18-month-old daughter and a newborn boy, and I couldn’t fathom going to the war and leaving them behind. I was distraught at the thought that I was sending others in my place.

If I couldn’t face deployment, I thought retiring was the right thing to do. My friend shared with me stories of his two deployments and helped me think clearly about what it means to serve our country and serve others. Ultimately, I did deploy and served honorably for a year overseas. My friend went on to deploy a third time. Among the horrors he experienced was being the sole survivor of a convoy hit by a roadside bomb.

He came back with deep, unseen wounds that only trained professionals could address. But he took his life the night before he was to enter an in-patient VA facility. At his funeral, his widow told me that he had said to her the night he took his life that he was falling apart faster than they [the doctors] could put him back together.

Another incident would that would shape my deep feelings about suicide was in some ways even more personal, when a sailor in my care attempted to take his own life. I noticed that we had two radio stations that transmitted music 24 hours a day, but we didn’t have any spiritual time. I recruited my friend, an Army chaplain, and we marched to the radio station to ask if we could have an hour on Sundays to air some contemporary religious music along with some friendly banter between the “chaps” and me. Our plan was to help talk through, on air, some of the issues facing our young population of soldiers and sailors who were far away from home for the first time. Without any experience whatsoever, we arrived at the radio station and virtually demanded to get air time.

I noticed that he would hang around and listen to the show with us and ask many questions about how to deal with the issues facing young people in that part of the world. I saw a young man like my own son –  looking for answers to difficult questions.

One day, I arrived at the radio station to prepare for taping and asked about the sailor. The chief in charge told me that he had attempted suicide the night before, that he had been flown off the island, and was in critical condition. He recovered after a very long time in the hospital, but it left me with a feeling that I had missed something. I felt guilty and angry at myself that I didn’t pick up on the signals and felt like a failure. Today, I still can’t say that I’m “over” it. But I’m grateful that we’re connected via social media and that he is happy married and has a beautiful son.  I continue to provide him career advice which, to some degree, has helped assuage my feelings of inadequacy.

Not a day goes go by that I don’t think about these people and what, if anything, I can do to help. It motivates me to continue to serve as a Navy reserve officer in addition to serving IBM’s federal clients in my civilian job. I’m so very proud of the work we are doing in cooperation with the Department of Veterans Affairs. I know first-hand that the people at VA are dedicated professionals totally focused on the Veteran population and its well-being. I’m humbled and honored to be part of a great group of patriots looking out for those who most need our help.

IBM is proud to partner with the U.S. Department of Veterans Affairs on programs that support our nation’s Veterans and their families. Next month, for the second consecutive year, IBM will support Brain Trust: Pathways to InnoVAtion in Boston. We look forward to continuing the valuable discussions begun last year and delving further collaborative efforts relating to brain and mental health.