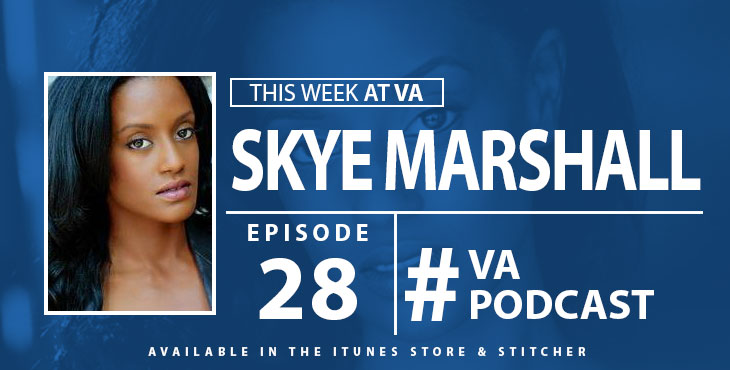 When you’re active in the Veteran community, you tend to hear names repeated in conversation and mentioned on social media. Recently, one of those names is Skye Marshall. I saw Skye in Got Your 6’s #shesbadass campaign and knew she’d make a great feature on the podcast. Skye talks with us about serving in the Air Force, following her dreams to Hollywood, working with Al Pacino, and more.

At the age of 19, Skye enlisted in the U.S. Air Force and was stationed at Nellis AFB, Las Vegas, NV. In Las Vegas, she heeded her true calling when she beat more than 8,000 college students from across the U.S. to be apart of the principal cast in the New Line Cinema feature film “The Real Cancun.” Skye made her national movie theater debut Spring 2003. Although the film offered her many opportunities to fulfill her ultimate dream of being a full-time actress, Skye was determined to finish her goal of earning a college degree.
Skye graduated with honors in May 2007 earning a Bachelor of Arts in Communication, Media & Theatre (CMT Program) from Northeastern IL University. Following her graduation, Skye moved to New York City. While working corporate during the day, in the evenings she attended acting training at Stella Adler Studio along with dance classes at The Broadway Dance Center to fine tune her skills and better prepare herself for the big move from NYC to LA October 2009.