Home / Mental Health, Vets Experience, Women Veterans / A look at some of the VA programs MST survivors chose to help them recover 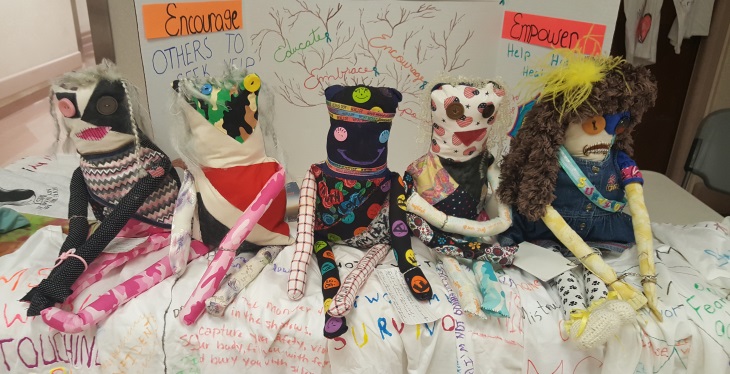 April has come to and end and it was another successful and moving month of events to raise awareness of sexual assault and in particular, military sexual trauma. I wanted to share with you a few events hosted this year in support of Sexual Assault Awareness Month by VA facilities across the country.

Tiffany Becker, the MST coordinator at the Marion VA Medical Center in Illinois, hosted a “Story Dolls Project.” This idea came from one of the Veterans in her MST therapy group and was something the group did in addition to the annual Clothesline Project, another therapeutic and awareness raising event where participants tell their story of sexual assault and recovery by decorating t-shirts that are then hung on a clothesline to educate others.

The grounds of the VA Central Western Massachusetts Healthcare System displayed not only a large banner raising awareness of MST, but also flags to represent the nearly 800 local male and female MST survivors currently receiving care at the facility.   As the banner declared “RECOVERY IS POSSIBLE.” It encouraged Veterans to learn more about MST services available in the VA by speaking with VA healthcare providers, contacting the MST program manager, or visiting the closest Vet Center.

Sara Eichstaedt, Western Massachusetts’ VA MST coordinator shared with me that she had seen similar flag displays online and thought it would have a positive impact.  The flag display stayed up for the entire month of April. The facility also partnered with the Springfield Vet Center for an Equine Therapy Day Retreat.

Another innovative event was hosted by Cara Freudenberg, a clinical psychologist, who is the MST coordinator at the VA Tennessee Valley Healthcare System, and an organization called Operation Song. Dr. Freudenberg shared that this was the fourth year they’ve partnered with Operation Song for a sexual assault awareness month event where female Veterans with a history of sexual trauma have an opportunity to express themselves and share their story through song.  Operation Song has a roster of talented, empathetic and experienced songwriters. Participants could tell their songwriter as much or as little as they would like about their story and themselves determined the focus of their song. The songwriters then took this “raw material” (sometimes very raw) and turned it into a moving song.

I could go on and on as these are only a small sampling of the events hosted all across the country. For example, many VA facilities hosted events where attendees wrote messages of support to male and female sexual assault survivors, including Baltimore, Maryland: Wilmington, Delaware; El Paso Vet Center, El Paso, Texas; Roseburg, Oregon;  Philadelphia, Pennsylvania;  and Augusta, Georgia. Others, such as Gulf Coast, Mississippi; Orlando, Florida;  Charleston Vet Center, South Carolina; Iron Mountain, Michigan; and Las Vegas, Nevada hosted “wear teal” and “wear denim” days to promote awareness.

Many others hosted training and educational events for staff and Veterans.  Each year, I find it so moving to see the photos and hear about the events, which are a great opportunity for sexual assault survivors to feel heard and supported, and an opportunity to educate others.  Our efforts are not limited to April, however, so thanks to all the staff that continues to do great things to show Veterans I CARE (Integrity, Commitment, Advocacy, Respect, Excellence) core values every day.