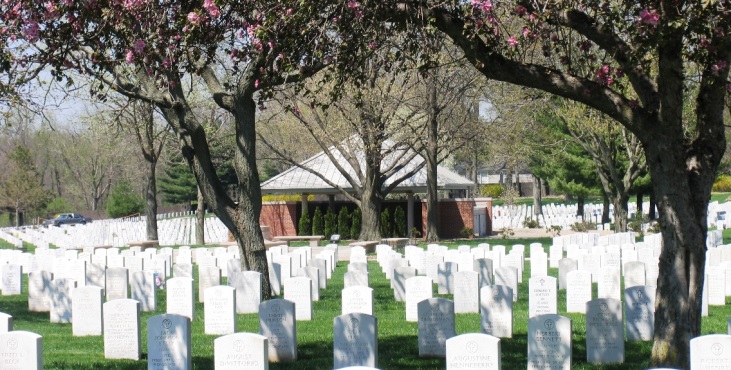 The 526-acre Jacksonville National Cemetery serving Florida’s largest city is still under construction, but interments began here in early 2009. We usually build out cemeteries in 10-year increments or phases; that is, we establish new cemeteries and expand as needed to accommodate 10 years’ worth of burials. Phase 1a is completed in Jacksonville and Director Greg Whitney expects staff to move into their permanent offices soon.

As is the case with all our new construction, the project design incorporates building and landscaping materials appropriate to the region. This approach results in cemeteries that are more sustainable and more attractive to local communities, too. It also means that a national cemetery in North Florida would never be mistaken for one in New Mexico or New England.

Even the naming of cemeteries and cemetery features emphasizes local connections—hence Jacksonville National Cemetery. Names for new cemeteries are based on these criteria: the name helps identify the location of the cemetery site; the name has broad appeal to the Veteran population; and the name provides a positive impression through its relation to history, region, community, or other notable geographic features, like lakes, rivers or mountains.

Cemetery roads and walkways are named using a combination of a proper name—such as a major figure in military history or a major campaign—and an identifier that helps visitors with navigation. The theme in Jacksonville National Cemetery is military installations in the region, so you’ll see Mayport Naval Station Drive, Moody Air Force Base Drive, Fort Stewart Drive, and Camp Blanding Drive.

As it happens, the city of Jacksonville itself is named for a Veteran: Andrew Jackson, who was the first military governor of the Florida territory and the seventh president of the United States. Fort Jackson National Cemetery in South Carolina and the city of Jacksonville, North Carolina—both destinations later in the trip—are also named for the soldier known as “Old Hickory.”

Below are photographs of the Jacksonville National Cemetery.

Ron Walters is VA’s Acting Principal Deputy Under Secretary for Memorial Affairs and Chief Financial Officer of the National Cemetery Administration. This is the third in his ten-part series exploring Veterans cemeteries in the southeastern U.S. Next in the series: Georgia Veterans Memorial Cemetery, Glennville: Partners in Memorializing Veterans.