Positive change is sweeping through Arizona under permanent VA leadership 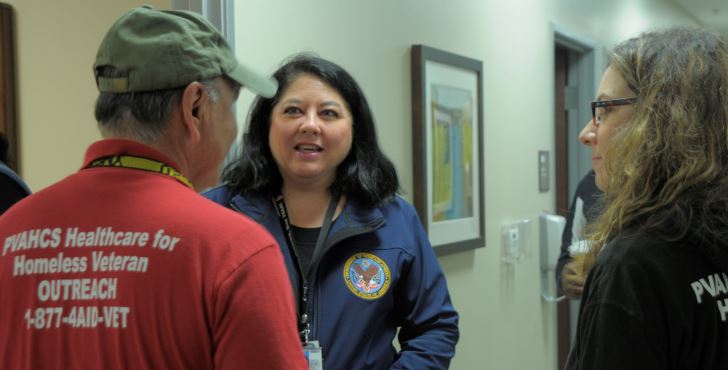 Permanent leadership is now on board at Arizona’s three VA health care systems and positive change is sweeping throughout the state.

With three VA hospital campuses, 25 clinics, nine Vet Centers, two cemeteries and one regional office, VA now has new leadership onboard that is dedicated to improve health care access to the more than 532,000 Veterans they serve.

RimaAnn Nelson, director of the Phoenix VA Health Care System, meets with volunteers prior to the local point-in-time homeless count.

“This is not the health care system it was in April 2014,” said RimaAnn Nelson, director of the Phoenix VA Health Care System.  “We still have areas to improve and we will not stop looking at ways to improve our health care delivery.  “But I am proud to say, Phoenix VA has truly become the location for innovation.”

Phoenix recently launched a new initiative with Triwest and CVS MinuteClinics that will expand access to convenient, quality health care for Veterans in the Phoenix metropolitan area. Through the initiative, Phoenix VA nurses now have the authority to refer Veterans to MinuteClinics through the Veterans Choice Program for treatment of minor illnesses and injuries.

Here are a few highlights of some of the positive changes Phoenix Veterans are seeing:

Barbara Oemcke, who previously served in leadership roles at VA’s Southern Oregon Rehabilitation Center and clinics is now at the helm in Prescott, which serves 26,000 Veterans across more than 65,000 square miles, has gone through many improvements.

The following are  some of the changes made over the last few years:

Moving the south, the Southern Arizona VA Health Care System (SAVAHCS), has a main campus located in Tucson and community based outpatient clinics located in seven other communities, to serve more than 171,000 Veterans in eight counties in Arizona and one county in Western New Mexico.

William J. Caron left a leadership role at Las Vegas VA Medical Center to become the SAVAHCS director back in March pledging to be forthcoming with Veterans and acknowledge their concerns personally.

“I will continue to engage and express where our challenges are and also our successes,” said Caron. “The staff of Southern Arizona VA and the Veterans of this community deserve nothing less than to hear directly from me on a continual basis of my plans for moving forward.”

Some of SAVAHCS achievements include:

While talking about Arizona and services for Veterans, we cannot forget about our VA regional benefits office and National Memorial Veterans Cemetery of Arizona – both based in Phoenix.

Chris Norton, who started last summer as director of the Phoenix VA Regional Office has made significant achievements in claims and benefits delivery:

Jerry Rainey, director of VA’s National Memorial Veterans Cemetery of Arizona, conducts on average 16 burials a day for honored Veterans and their loved ones with 3,750 burials conducted last year. The landscaping of the VA cemetery in Phoenix is called “water-wise” which reduces or eliminates the need for supplemental water from irrigation. The Phoenix cemetery is an example to others nationwide of the beauty that comes from natural landscaping at a national cemetery.

All this to say, that Arizona Veteran voices are being heard and VA is there to help them on the journey of treatment, recovery and well-being.  Veterans should feel a level of comfort knowing solid, permanent leadership exists statewide throughout Arizona’s three health care systems and other facilities.

We can’t erase the past, we can only work to improve, leverage our successes and talents, and focus on building a more balanced reputation than the headlines have given our VA health care systems throughout Arizona and across the country.

About the author:  Jessica Jacobsen is a public affairs specialist in Dallas with the VA Office of Public and Intergovernmental Affairs.