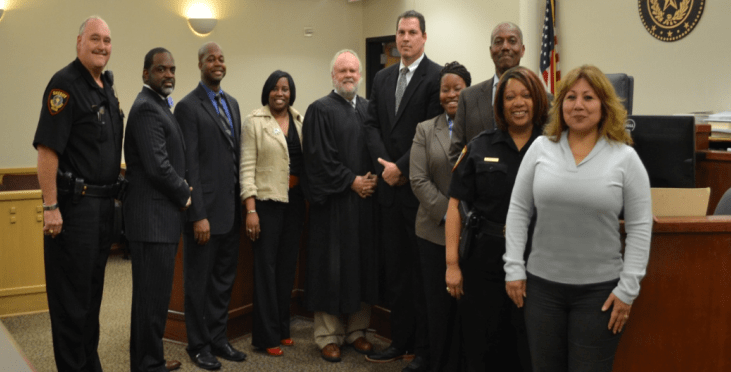 Three years after a tour in Iraq, an Army Veteran was settling back into civilian life in Texas when he witnessed a terrible accident at work.

“I applied first aid on a fellow employee,” said M.V., who requested that he only be identified by his initials. “I had this uneasy feeling the rest of the day. This building tension was like a slow tidal wave.”

On his way home from work that evening, he bought some beer. When it was gone, he decided to go to a local bar and, when it closed, he continued drinking at an after-hours place.

“When I left that place, I was lost and drunk,” M.V. said. “A police officer stopped me for failure to signal at an intersection.”

M.V. was arrested and charged with DWI. After he was released from jail, he sought help from VA, which diagnosed him with PTSD and prescribed an anti-depressant. He pleaded guilty to DWI, successfully completed two years’ probation and tried to put the unfortunate 2007 event behind him.

Seven years later, he was arrested again for DWI.

“This time, I was so drunk I passed out at a stop sign,” M.V. said. “The cops had to smash the window to get me out. I’m glad I did not hurt anyone; that would have been tough to live with.”

Realizing that he needed legal help and treatment for underlying service-related issues, he began online research into Veterans Court – a rehabilitative program he had heard about for Veterans caught up in the criminal justice system. He found Varghese Summersett, a law firm based in Fort Worth that had successfully assisted other Veterans entry into Tarrant County Veterans Treatment Court. Among other things, the website touted the program as “exceptionally successful” and described how Veterans Court focuses on judicially supervised treatment options for Veterans facing criminal prosecution.

M.V. contacted the law firm which, after an initial screening to see if he was a good candidate, began the application process to Tarrant County Veterans Treatment Court (VTC). The process is time-consuming and paper-intensive, requiring military and medical records.

Veterans must first obtain preliminary approval from the Tarrant County District Attorney’s Office. Once candidates cross that hurdle, they are required to have a face-to-face meeting with VTC Administrative Assistant Sylvia Magana and Program Manager Courtney Young.

“This meeting is very important because the VTC policies and procedures are reviewed with the Veteran so he or she is aware of what is expected,” Young explained. “This is the time for the Veteran to ask questions and express concerns.”

After the meeting, Young completes a comprehensive assessment to determine the Veteran’s needs and whether he or she is suitable for the program. Viable candidates must then get final approval by the Tarrant County District Attorney’s Office.

Once accepted into the program, Veterans must plead guilty to the offense and then dedicate themselves to an intensive correction and treatment plan that includes frequent court appearances, intensive supervision and counseling. Veterans who complete the program, which can last anywhere from six months to two years, will have their case dismissed and later expunged.

Judge Brent Carr, a Veteran himself and the founder of the Tarrant County’s Veterans Treatment Court, said the program is not a way to skirt the law or responsibility, but to rehabilitate Veterans and give them a second chance.

“When I hear the horrific details of what many of these young men and women have had to endure in their service to their country, I am convinced this is the least we can do,” Carr said. “Here in Tarrant County, we have a dedicated team of professionals who work very hard to put these Veterans back in a positon to lead a successful life.

“Over seven years, we have graduated almost 200 Veterans with a re-arrest rate of less than 6 percent,” Carr said. “These programs work and they are a proper opportunity to afford those who were willing to sacrifice everything in defense of our freedom.”

The road to recovery and redemption

Nearly a year after he was arrested, M.V. was finally accepted into the Veterans Treatment Court program. It was rigorous, to say the least.

“For the first 90 days, everyone wears an alcohol monitoring ankle machine – 24 hours a day for 90 days straight and there is a monthly fee,” M.V. said. “When that is removed, you have to have a breath monitor on your vehicle and that has a monthly fee. There are also a lot of meetings and appointments that you have to go to — a lot of them are during normal work hours.”

M.V. said the best part of the program was being around fellow soldiers again and finally receiving much-needed counseling.

“Without the counseling that was required, it would just be a matter of time before I was in trouble again,” he said. “I have been off all medication for over a year now, and I feel great.

M.V. put in the work, graduated from the program, and had his case dismissed and expunged. Best of all, he discovered a newfound sense of purpose.

“I was definitely given a second chance,” he said. “Before the Veterans Court, I was short tempered and grouchy towards my wife and kids. My relationships have improved and my stress levels have gone way down. And, I have started a new career where I can give back to society.”

Although the road was difficult at times, M.V. said the sacrifice was well worth it.

“You will be expected to commit to the program and make it your priority,” M.V. said. “Just remember that everyone there wants to help you. Their goal is for you to exceed – not just in the program but in life.”

Benson Varghese is the founder and managing partner of Varghese Summersett, a criminal defense firm based in Fort Worth, Texas. He is strong supporter of Veterans and an advocate for Tarrant County Veterans Treatment Court.